The following is an edited version of the review I posted of HAND TO GOD after seeing it Off Broadway at the Lucille Lortel Theatre in March 2014.  It's now on Broadway with the same cast and creative team in a production that pretty much matches the original. If anything I was even more impressed this time, not only by the amazing performance of Steven Boyer, which is one of the most brain-searing I've seen in a long lifetime of theatregoing, but by the brilliance of the ensemble and the depth of the play, which a first time viewing is likely to mask because the conception is so original. 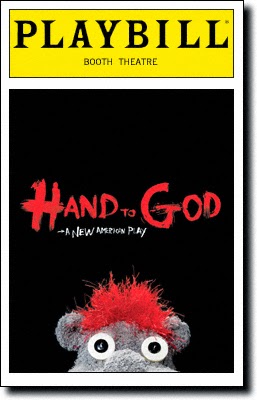 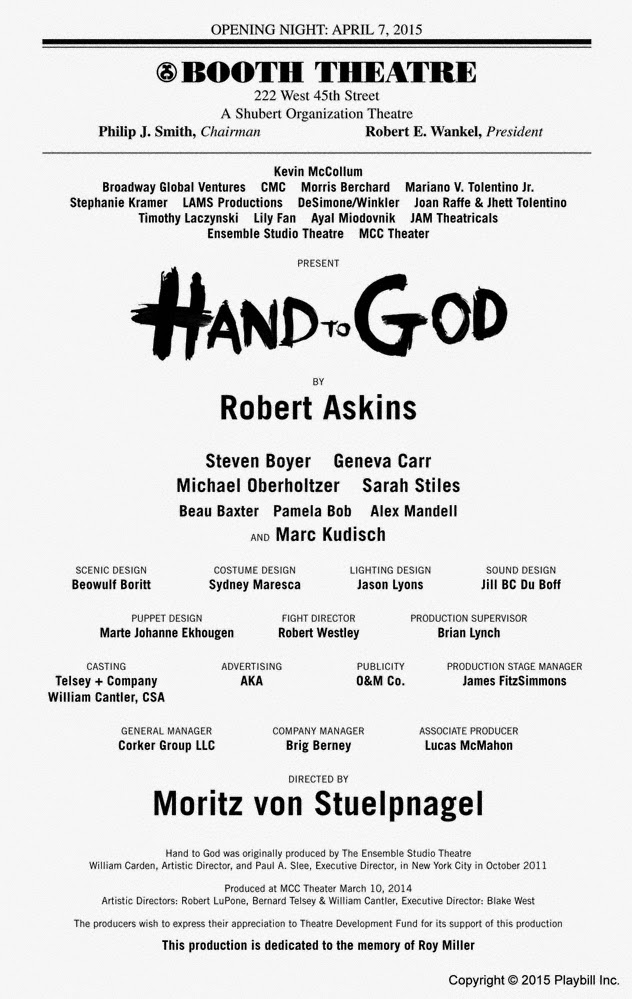 Robert Askins’s intriguingly subversive, boundary-crossing play, HAND TO GOD, features a breakout performance by Steven Boyer, who has been with this play since it premiered in  2011 premiere at the Ensemble Studio Theatre, for which he won an Obie. If he doesn't win more awards following the show's recent Broadway move, it will be either because of a rules technicality or because voters were asleep at the wheel. The fact that he actually has an understudy (Alex Mandell) is surprising, since it seems impossible that anyone could replicate what he does in this exceptionally difficult part, both emotionally and technically.
When the play was produced by the MCC Theater at the Lortel following its EST premiere, it featured a new set designer (Beowulf Boritt), lighting designer (Jason Lyons), and sound designer (Jill BC Du Boff), and three new actors, all of whom are still with it. Michael Oberholtzer is the randy, upstart teenager Timothy, Sarah Stiles is his nerdy classmate Jessica, and Marc Kudisch is Pastor Greg, who runs a church in Cypress, Texas, where the recently widowed Margery (Geneva Carr, who created the role), the mother of another student, 15-year-old Jason (Mr. Boyer), is in charge of a Sunday School class learning how to tell Bible stories through the use of hand puppets.

The inventive Mr. Boritt, whose Lortel production created various spaces via a combination of revolving panels and walls that turned like book pages, now employs sliding units and a revolve; everything, however, looks just as it did downtown. The principal room, a cinderblock-walled church basement, has a desk, several plastic chairs, church posters, and a puppet booth with a red cross on its front.
It’s in this room that Margery, asked by Pastor Greg to prepare a puppet presentation for the church services on the coming Sunday, is running her class. Each student has a sock puppet that also comes with small rods for manipulating the puppet’s arms. Jason’s puppet is called Tyrone; a sort of prologue shows him in the puppet booth, deploying his sardonic sense of humor to offer his own strange take on Genesis. A lot is going on beneath the surface for each of the characters, with the uptight Margery doing her best to suppress her sexual longings; Timothy finding it hard not to come on strong to her; the pastor stealthily trying to seduce her under the guise of offering support; Jessica feeling urges toward Jason; and Jason trying so hard to repress his own demons that they possess him in the form of Tyrone.
Tyrone, who speaks the ugly truth (like declaring that Margery drove Jason’s father to eat himself to death) in guttural tones totally drenched in nastiness, engages in a struggle for control of Jason’s psyche. This leads Jason to try destroying the puppet by tearing it apart, only for him to wake up in bed one night and find Tyrone back on his hand, his features now wildly rearranged with scary, protruding teeth lining his big red mouth.

Tyrone's a foulmouthed monster, fully capable of biting off someone’s ear lobe and attacking Jason by the throat. (Pastor Greg calls for an exorcism at one point.) Mr. Boyer goes back and forth between being the retiring Jason and the frighteningly aggressive Tyrone with astonishing facility, changing his voice instantaneously to suggest Tyrone’s growling anger and sarcasm, and manipulating Tyrone’s tiny, but stretchable arms with such ease that it’s hard not to believe the gray sock puppet with the red and white button eyes isn't a living being. If you remember the 1945 portmanteau movie DEAD OF NIGHT, starring Michael Redgrave as a ventriloquist whose dummy seems to take control of him, you’ll have an idea of how nerve-wracking this can be. (MAGIC is another movie example, and there's a famous kabuki dance called KAGAMI JISHI where a hand puppet of a lion's head possesses the dancer.)
It's no exaggeration to say the play is often hysterically funny, and also is extremely profane (part of why it’s so hilarious); one of the highlights is a remarkably literal sex scene between Tyrone and a female puppet worn by Jessica, as Jason and Jessica stand idly by chatting about how they feel about one another. Performing with such a split focus is a tour de force of acting concentration; the contrast between their ordinary conversation and the puppets’ pornographic actions is remarkably well done. For me, just patting my head while circling my hand over my tummy is a challenge.
Under Moritz von Stuelpnagel’s terrifically clever yet nuanced direction, all the awesome ensemble delivers the goods. Ms. Carr, a trim, attractive woman, is especially excellent at playing a prim mother whose frustrations so overcome her that she throws all caution to the wind and engages in ferociously aggressive sex with one of her teenage students. Marc Kudisch’s Pastor Greg is completely believable as an earnest man who fights his urges to express his inner feelings; when he starts to curse he forces himself to twist his words into something non-blasphemous. “God . . . damn it,” for example, is converted quickly to “God . . . bless America.” Both Mr. Oberholtzer and Ms. Stiles are fully up to the considerable demands of their roles.
Although we never learn the answer, we’re asked to consider if Tyrone is the devil incarnate (there’s a scene of him in the puppet booth surrounded by flames) or some psychological cancer eating away at Jason. But since everybody in the play has an inner demon of some sort, his seems only the most extreme manifestation of the problem. Whatever HAND TO GOD’s moral is, it definitely isn’t a puppet play for kids, and even some adults may find its considerable crassness hard to take. Nevertheless, it definitely makes a stinging impression and Jason’s dilemma is one hand job you won’t easily forget.