"Back from the Future" 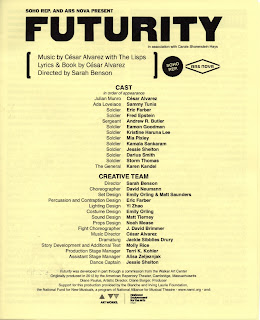 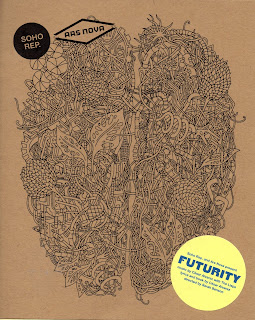 Early on in FUTURITY, César Alvarez’s hugely imaginative, sometimes charming, but just as often frustrating sci-fi, steampunk musical, a coproduction of Off-Broadway's Soho Rep and Ars Nova, the audience is told “Do not attempt to learn about history from this musical.” It’s true that the specific facts in the show aren’t historically accurate, but it’s also true that there is something to learn about history here, especially if you didn’t know that a woman named Ada Lovelace, whose father was Lord Byron, was a mathematical genius who had something to do with the ideas that led to the creation of the first computers; in fact, like me, you might not even have known that computers were being invented in the decades before the Civil War.
Lovelace, who died at 37 in 1852, 12 years before the imaginary events depicted in FUTURITY, has been treated in theatre and film before, but from a less overtly anachronistic point of view. Alvarez treats her much more fancifully as a sort of metaphorical figure who engages in an epistolary collaboration with an imaginary Civil War soldier, a would-be inventor named Julian Munro, sent to fight for the Union in Virginia; his company’s immediate mission is to destroy a rail line bringing food and supplies to the rebels.Munro and Lovelace seek to create a computer-like machine, the Steam Brain, for which they’ll provide an artificial intelligence that will somehow put an end to war. (The actual computer prototype her ideas may have contributed to was called the Analytical Engine, developed by Charles Babbage.) The optimistic view of technology’s promise held by the play’s 19th-century characters, of course, has been cruelly crushed by the realities of 20th-century warfare.

Alvarez wrote the book and lyrics for FUTURITY; he shares the credit for the music with his band, The Lisps, who perform the piece, with him in the lead and Sammy Tunis (outstanding) as Ada. She wears an odd, balloon-shaped skirt and tight black blouse, her blonde hair tied back tightly and capped with a weird whorl of a topknot. Each ensemble member both sings and plays an instrument, the latter serving also as weapons carried by the soldiers portrayed. If you’ve seen the stagings of John Doyle, you’ll recognize this actor-musician tactic, although FUTURITY’s director is Sarah Benson, Soho Rep’s unflaggingly inventive artistic director. An earlier version, also staged by Ms. Benson, premiered at the American Repertory Company in Cambridge, MA, in 2012. The show has since been considerably revised.
FUTURITY has a concert-like ambience, with the leads speaking and singing into standing mics much of the time, and the action almost always directed by the players not at one another but at the audience in a self-consciously performative manner. At a few moments, the leads, as themselves, chat casually with each other and us, seemingly improvising. Most of the soldiers are dressed by costume designer Emily Orling in 20th-century bluish-green military uniforms and helmets, while the General (Karen Kandel) wears a Civil War uniform, including a broad-brimmed hat. There’s a good deal of precision military-like movement, choreographed by David Neumann, excellently executed by the company at large. One of the dramatic highlights comes when the General leads the troops into battle and they seem about to charge from the stage into the auditorium just before the lights black out.
Much of the music has a bluegrass, folk-rock ambience (Julian plays guitar), and the tunes often reflect the feel of 19th-century folk songs: “Cumberland Pass” and “On the Banks of the Arkansas” are exemplars. While the score generally makes for easy listening, too many tunes eventually begin to sound like one another. And, though the subject matter is provocative, and there are interesting ideas to ponder—including the relationship between the present and the future, the possibility of a world without war, the “animating force” responsible for human intelligence, and the impact of technology—there’s little forward dramatic movement to the events.
By the time act one ended, so little suspense had been generated, in fact, it almost seemed unnecessary to return for act two. That, though, would have been a mistake, since set designers Emily Orling and Matt Saunders, whose act one set—possibly inspired by computer punch cards—is impressively creative, now cover the upstage area with a marvelous apparatus of wheels, gears, and gizmos to represent the Steam Brain in action.  (Kudos also to the elaborate lighting design of Yi Zhao.) The performers fill its niches and put it into motion, with percussionist master Eric Farber brilliantly demonstrating his considerable skills on its surfaces. Still, at nearly two hours, FUTURITY takes us much further into our own futures than the material warrants.
Note: A sign on the door to the theatre said that the box office would open a half hour before the curtain, scheduled for 3:00 p.m. when I went. The door didn’t open until 2:45, forcing the audience to stand outside on a chilly day. Once inside, the audience entered a dimly lit lobby, with a few benches and seats, and a bar selling drinks and, apparently, offering free popcorn. The doors to the auditorium didn’t open until after 3:00 p.m., so the audience milled about as an accordion-playing singer on a small platform entertained them. The show itself didn’t begin until 3:15 p.m.