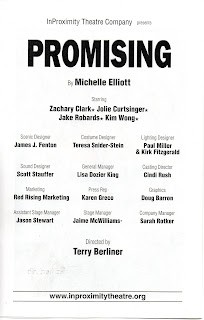 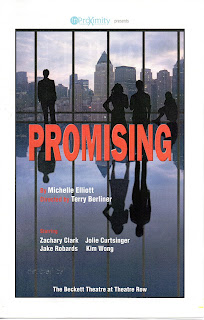 The promising subject of PROMISING, Michelle Elliott’s flatfooted, “ripped from the headlines,” Off Broadway play being given by the InProximity Theatre Company, is an accusation of sexual assault leveled by a 20-year old woman at David Carver (Jake Robards), a charismatic, 40ish New York City politician. David’s running for his second term on the City Council, and has a huge lead in the polls; his beautiful campaign manager, Verity Jones (Jolie Curtsinger), can already see the White House in his future. In her skewed view, the situation needs a whatever-it-takes response if David’s career is to be saved. So enamored of the seemingly squeaky clean pol is she that she doesn’t even bother to ask him if the accusation is true.

Verity, along with David’s speech writer-advisor-buddy Shed Walker (Zachary Clark) is struggling to contain the fallout, when a knock at the door brings in Gemma Carver (Kim Wong). Gemma—all Goth, peace signs, and veganism—is David’s 20-year-old, half-Chinese (if you can believe Ms. Wong’s casting), half- sister, born when David and Gemma’s late dad served as the ambassador to Hong Kong. Gemma has decided to leave Stanford and needs her brother’s support; she doesn’t exactly hit it off with Verity, who, quite implausibly, reacts with comments that she worries make her seem racist.

The torch Verity’s been carrying for David for years has been burning brighter for him ever since he left Nora, his longtime girlfriend. Her love is such that she’s even okay with abandoning her own anti-rape advocacy by revealing publicly that the girl who accused David had an abortion (as if showing blaming the victim for being irresponsible would somehow defuse the situation). For his part, David hasn’t acted on his presumed attraction for Verity (I say presumed because it’s barely noticeable) out of “respect.” Talk about implausibility!
The narrative about how to handle the scandal—and the moral dilemmas raised by the backroom maneuvering—loses its urgency in a series of stops and starts as the playwright takes up stage time with Gemma’s ecological activism (whose moral dimensions are tied obliquely to David’s situation), Gemma and Shed’s mutual attraction, David’s unconvincing reaction to it, and the burgeoning David-Verity thing. Eventually, the scandal again takes precedence, and, as we begin hoping that the playwright won’t resolve David’s sex scandal in the conventional way—PING!—a text message reveals that’s exactly what she does. Still, the final scene, in which the characters weigh in on the future, is the most interesting one, tinged as it is with the right amount of surprise and ambiguity.
The action—carried out over 90 intermissionless minutes—is set in David’s gray and black, depressingly fortress-like apartment (designed by James J. Fenton and lit by Paul Miller and Kirk Fitzgerald) on the 40th floor of a New York high rise; a bedroom is at stage right, the living room and kitchen at left.  Floor to ceiling windows are presumed to line the front of the stage, allowing the actors to face forward as if they’re admiring the incredible view. The lack of curtains or shades—not very wise if you’ve ever felt the blazing sun in one of these high-rises—is a device to allow an invasion of privacy by a photo-taking drone.
The bloodthirsty press and social media get their fair share of lumps in PROMISING, which is billed as “a comedic indictment of our current political climate,” although the sparsity of snappy lines that don’t snap, and the seriousness of the situation, belie that description. Partly, this stems from director Terry Berliner’s thuddingly paced staging.
One of Ms. Elliott’s dramatic devices is occasionally to split the dialogue between conversations held by those in the living room, and those in the bedroom. As one pair speaks, the other pauses, but doesn't freeze. This creates a seriously artificial effect as the silent actors pretend to be thinking as they wait for the other dialogue to end before they themselves can resume.
Although the characters are paper thin, Ms. Curtsinger, a brunette looker in high heels, tight black skirt and blouse (costumes are by Teresa Snider-Stein), makes the most believable impression as the conniving but ultimately decent Verity. Ms. Wong’s obsessive activist is played largely on one note, and Mr. Clark is acceptable as the politician’s sidekick/acolyte. I’m afraid, though, that Mr. Robards—a handsome simulacrum of his late, gifted dad, Jason—is surprisingly vapid. One might even apply a famous crack attributed to Dorothy Parker at Katharine Hepburn’s expense: he “ran the gamut of emotions from A to B.”
The issues of morality and conscience that should be driving the play never go beyond the formulaic, and the audience must struggle to understand how the insipid politician who stands at the center of this maelstrom could ever have gotten where he is, much less be considered presidential material. Like the words that come out of politicians’ mouths, whatever promises PROMISING makes go largely unfulfilled.

OTHER VIEWPOINTS:
Lighting and Sound America