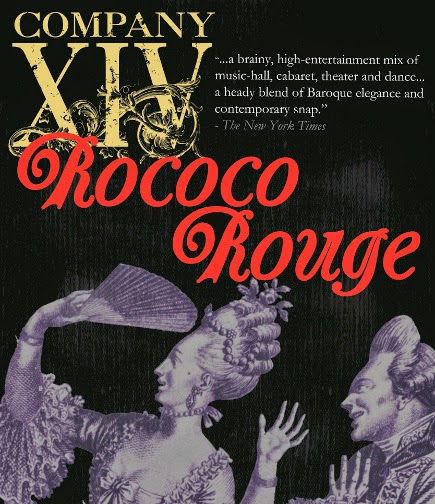 ﻿
The dances include pas de deux and solos (Laura Careless’s is a standout) as well as solo songs, the two principal singers (apart from Ms. Watson) being the lovely brunette Brett Umlauf and the voluptuous Katrina Cunningham, whose renditions of pop tunes, such as Beyoncé’s “Drunken Love” and Brittany Spears’s “Toxic” (titles my theatre companion provided), have a Norah Jones vibe; I admit, however, to having had trouble making out the slurred lyrics. Allison Ulrich proves a deft aerialist on the hanging hoop, especially when she’s paired with Mr. Gray and they have to perform very close to the nearby lighting instruments. She's also no slouch when it comes to pole dancing. Courtney Giannone performs on the cyr wheel, but why she’s been asked to hide her arresting looks by wearing not only an unflattering hairdo but a drawn-on mustache is anybody’s guess. Rob Mastrianni is the talented guitarist who accompanies several numbers.
ROCOCO ROUGE isn’t up to the standards of NUTCRACKER ROUGE, which included several of the same artists on and offstage. It needs something other than atmosphere to unify its parts, and the inclusion of some more daringly erotic material would go a long way to bringing the necessary rouge to audiences’ cheeks.
Posted by Samuel L. Leiter at 11:47 AM