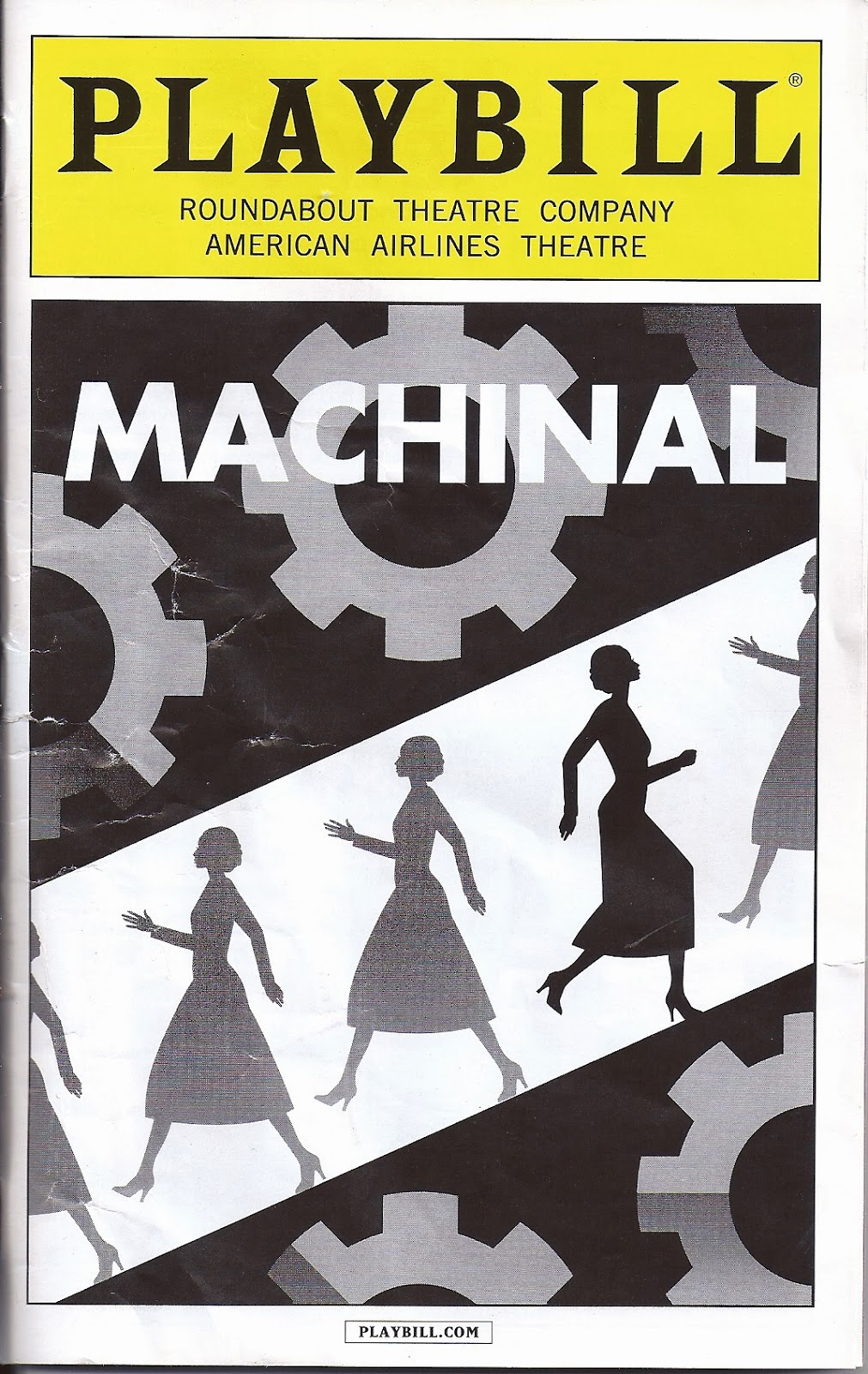 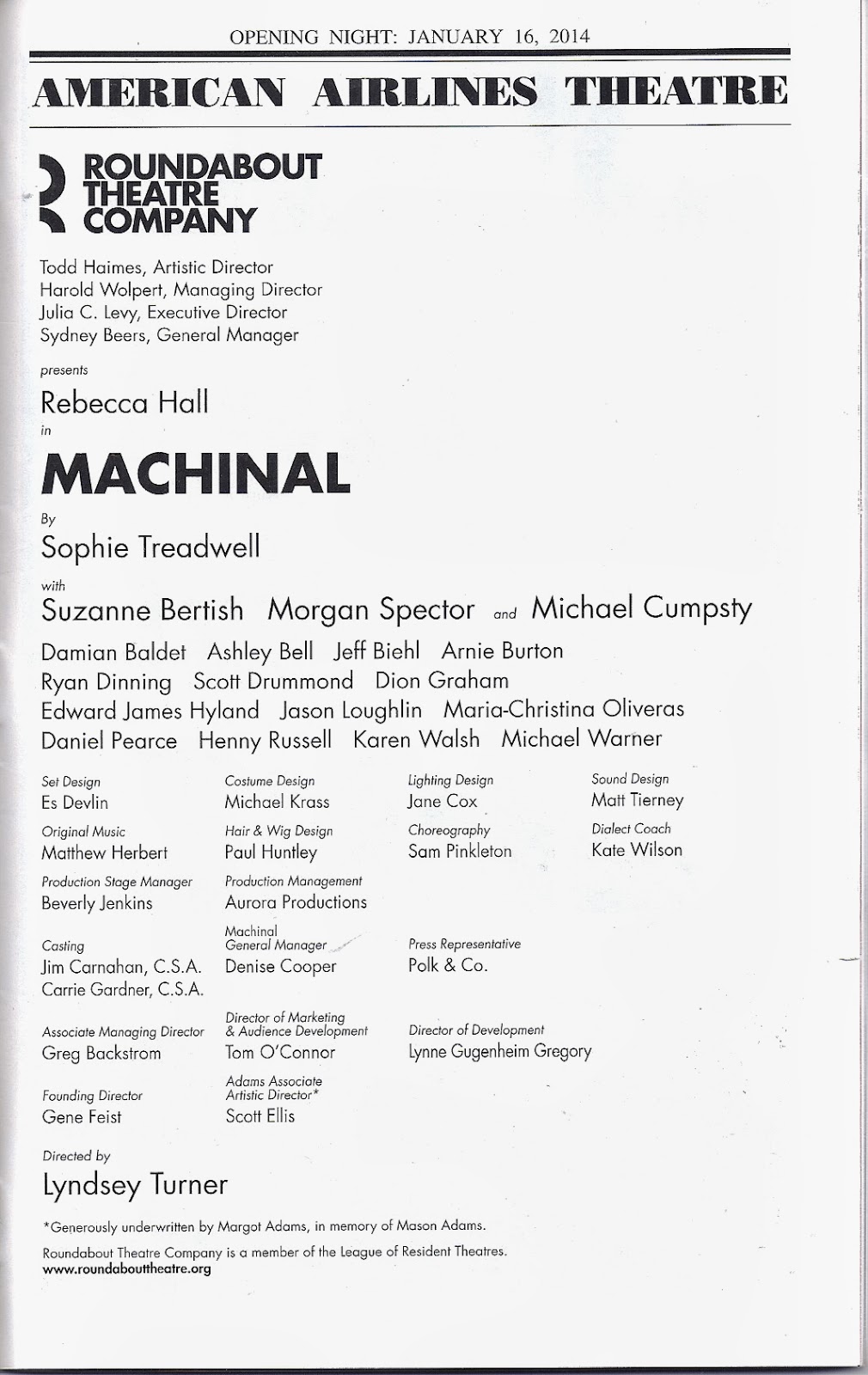 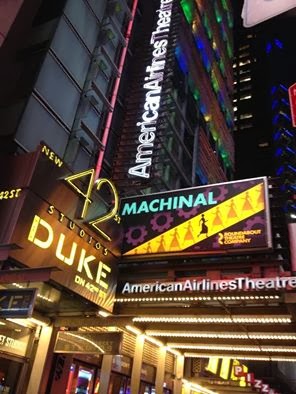 The most sensational and widely reported crime story of 1927 was the murder of a Queens, New York, man named Albert Snyder, by his wife, Ruth, and her lover, Judd Gray. In January, 1928, Gray and Snyder both died in the electric chair at Sing Sing. A photo of the moment Ruth was jolted by electricity was taken surreptitiously and published on the front page of the Daily News. In September 1928, journalist Sophie Treadwell’s MACHINAL was produced on Broadway in a stunning production directed by Arthur Hopkins. It told the story of an ordinary New York woman who, after falling in love with an adventurer, killed her husband, was tried, and executed for the crime. Treadwell denied that the play dramatized the Snyder-Gray murder case, but, despite the major differences between the real story and the play, the actual events certainly influenced the play. According to Burns Mantle in his Best Plays of the Year, 1928-29, Treadwell was “willing to admit” that she’d “been influenced to some extent by the grinding forces of a mechanistic world that had played a part in the lowering of Ruth Synder’s [sic] standards and loyalties, her morals and ambitions, her pathetic and utterly frustrated pursuit of happiness.” (The story also inspired James M. Cain's novels, DOUBLE INDEMNITY and THE POSTMAN ALWAYS RINGS TWICE, both of which became classic films noir, among other influences, including a Guns n Roses album picture.) 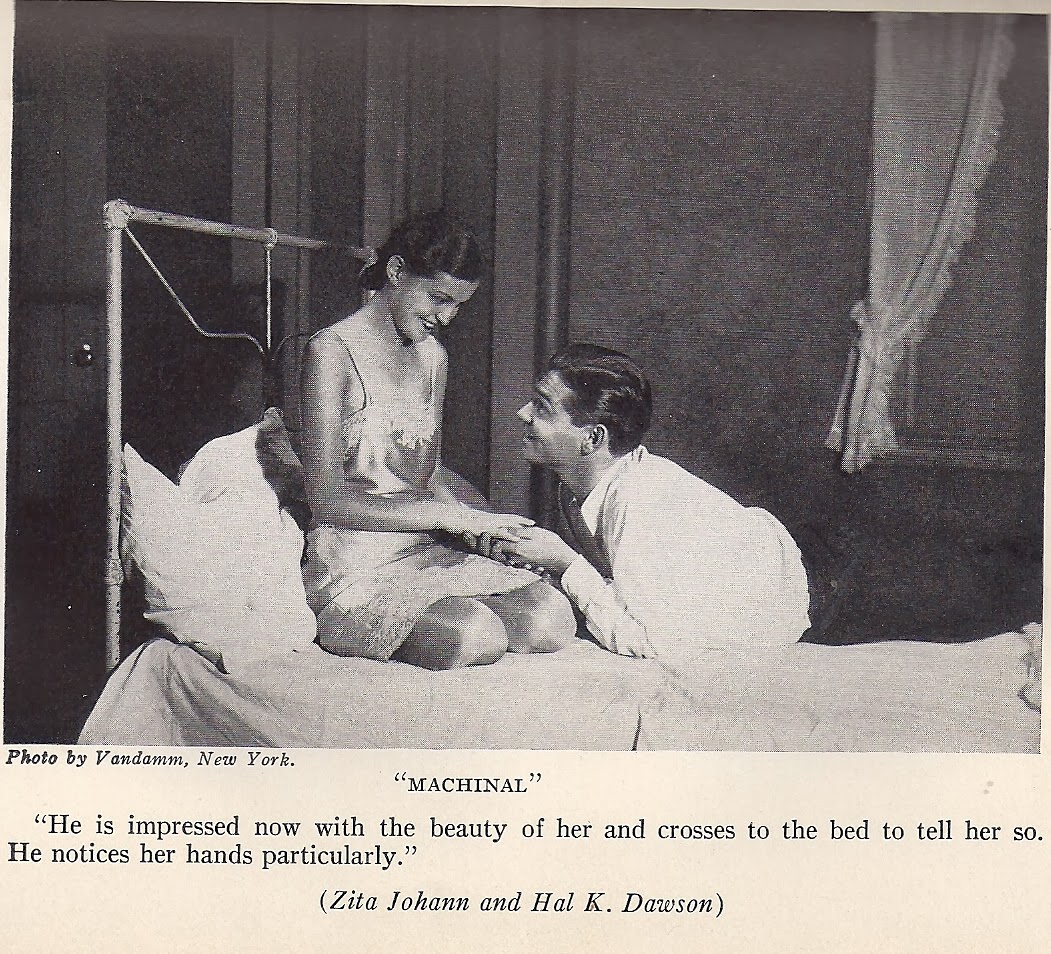 Left. Zita Johann and Clark Gable in Vandamm's photo of the original production. Note the caption's error in identifying Gable as Hal K. Dawson. Right: Rebecca Hall and Morgan Spector. Photo: Joan Marcus.
The hyper-intense, melodramatic MACHINAL takes a highly theatrical approach to its narrative, using the techniques of European expressionism with its many scenes, stylized sound and lighting effects, choreographic staging, and frequent rat-a-tat dialogue that sounds like the rapid tapping of telegraph or typewriter keys. It includes passages of heightened lyrical expression, repetitive, everyday expressions chosen for their clichéd inanity, and (for 1928) sexually provocative situations; it also employs scenes bordering on kitchen sink naturalism to show the seamy underbelly of life in the modern urban jungle, with all the pressures it's capable of exerting on sensitive souls.


Despite several very positive reviews, and its inclusion in Mantle's Best Plays series, it also had its strong detractors, who found the play "unwholesome, hollow, incomplete, and unconvincing," as I reported in my Encyclopedia of the New York Stage, 1920-1930; the public was not particularly interested and it closed after only 91 performances, but its impact was strong enough to give it something of a cult status among those who recognized its groundbreaking features, not least of which was the fact of its having been written by a woman at a time when female playwrights were still trying to break Broadway's glass ceiling. It also earned a footnote in modern theatre history for introducing Clark Gable to Broadway in the role of the murderess’s lover. Subsequent stagings were usually in regional or nonprofessional venues, but in 1989 Michael Greif’s highly lauded Public Theatre production brought the play back into the spotlight. The current Roundabout Theatre revival at the American Airlines Theatre, however, is its first Broadway revival since 1928. 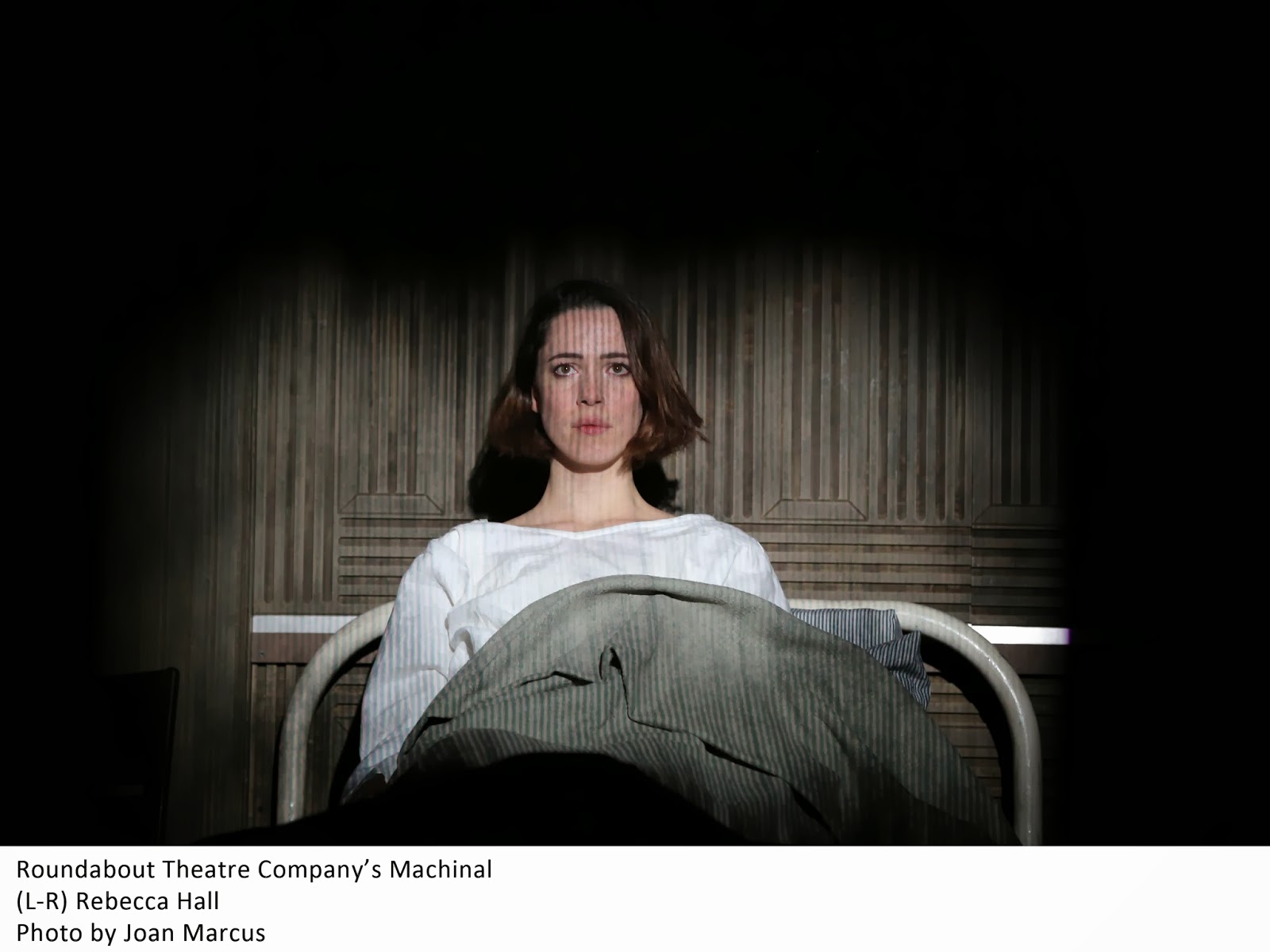 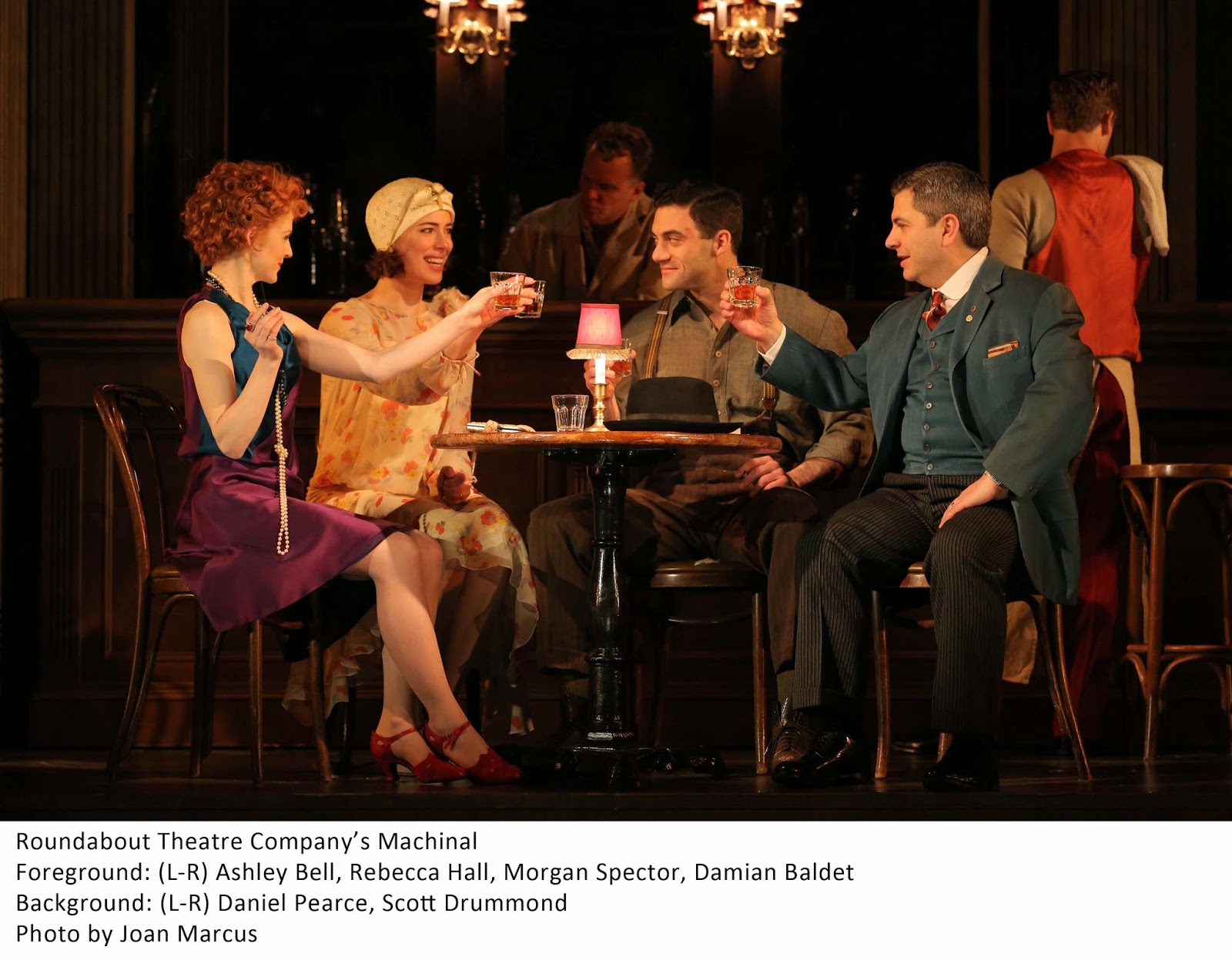 British director Lindsey Turner’s production is an elaborate one, mounted on a turntable to enable swift passage between scenes. In order to cover costume changes, she's introduced a number of silent scenes that roll into view as the revolve spins, showing painterly arrangements evoking life in New York during the late 1920s. The very first such interpolated scene sets the tone as we see an essentially black and white image of a packed subway train with hatted straphangers in long coats jammed together and hovering over seated passengers as the light picks up the anxious face of the heroine, Helen, called in the credits the Young Woman (Rebecca Hall). She's so uncomfortable that when the train stops, she rushes out, causing her to be late to work.
Her office is a hive of nonstop, frenetic, yet smoothly functioning mechanical (i.e., "machinal") activity, with brief lines of dialogue spit out in machine gun fashion, showing us the dehumanizing effect of modern life that Treadwell holds responsible for the Young Woman’s mental and moral instability. She is uncomfortable for any number of reasons, including a nagging Mother (a very good Susan Bertish) and insufferable boss, George H. Jones, the Husband (Michael Cumpsty in the kind of role he specializes in), who wants to marry her but who, with his "fat hands," makes her skin crawl. Despite her distaste, she marries him; he, while never actually brutish or cruel, is more a machine than a human being, spouting one pat phrase after the other. In one of the strongest scenes, their marriage night proves horribly uncomfortable for the Woman but they do soon have a child and, after nearly half a dozen years, she seems to have adjusted to married life, although underneath she's falling apart.


The Woman and a friend visit a speakeasy, where she meets a macho guy, the Lover (Morgan Spector, in the Gable role), and they start an affair. MACHINAL having been written in the late 1920s, the speakeasy scene is rather daring as one table includes a gay older man (Arnie Burton) seducing a young man, the Boy (Ryan Dinning), while another shows a man (Dion Graham) convincing his girlfriend (Karen Walsh) to have an abortion. Taking her cue from his tale of how he killed two Mexicans with a bottle filled with stones, the Woman decides to kill her spouse as he lies sleeping. Arrested, she's tried in a highly energized courtroom scene during which she's been allowed to take the stand by her vigorous attorney (Arnie Burton), whose verbal duel with the prosecutor (Michael Warner) is another dramatic highlight. Eventually, the Woman, hearing an affidavit signed by the absent lover testifying to her guilt, breaks down. A few moments later, she's in her death row prison cell, just before her execution, where she's being administered to by an coldly uncaring priest (Edward James Hyland), who responds to her fears with stereotypically priestly gibberish. The prison officials prepare her for death and the stage begins to revolve as she marches with the others in single file along the proverbial last mile. This sequence has been added to Treadwell's script, which ends with the Woman still in her cell as the lights change from one color to another before coming on full in an indescribable blaze. Also added is the vision of the Woman, watched through a window by the press and various officials, as she’s seated in the electric chair, the switch is thrown, and the lights flare, an image closely reflecting the photo of Ruth Snyder’s dispatch.
Despite the  production's several powerful images, the staging doesn’t find a consistent style in which to meld the expressionistic and realistic modes. For example, the bedroom scene with the lover, played naturalistically and well acted in that vein, seems out of tune with the almost ritualistic behavior of other scenes. This is a problem inherent in the play, but I suspect that it might have been somewhat ameliorated by less dependency on the scenic literalism provided by designer Es Devlin.  The speakeasy scene, for instance, could be straight out of any conventional O’Neill production. And is it really necessary to have a huge steel cage for the prison scene?
Although all the actors are highly polished, the acting also ranges in style, from Mr. Cumpsty’s stiffly robotic behavior to Suzanne Bertish’s haggard naturalism, while the tall, lanky Ms. Hall, vaguely reminiscent of a young Vanessa Redgrave, falls somewhere in between. She handles the long, telegraphic-like monologues with technical aplomb (audience members applauded at one point), and she has some fine moments in the bedroom and courtroom scenes, but it’s not easy to accept her on a moment to moment basis. Her voice seems always raised a bit too high, and can become monotonous and even grating. In a Playbill article, Ms. Hall describes the character as “normal,” but, from the minute we lay eyes on her on that crowded subway, there’s little that’s normal about her. She’s a woman with severe psychological issues, a depressive who keeps mentioning death and dying, and who, despite not being unattractive, is ineffably alone, living in a tense love-hate relationship with her mother. Her decision to kill her husband, while acceptable within the context of Treadwell’s dramaturgy, is anything but normal. Perhaps Ms. Hall means she’s “ordinary,” or unexceptional. One can understand why Richard Dana Skinner, reviewing the 1928 performance, thought her "a psychologically deranged moron."


Given the emphasis on visual effects it would be hard to fault Michael Krass’s period-perfect costumes, especially the lacy wedding dress worn by Ms. Hall (in the interpolated wedding scene), with its mantilla-like headpiece, reminiscent of those we see in old wedding photos of our matriarchal forebears; Ms. Hall’s height, however, is emphasized by this headpiece, making her tower above everyone else in an unintentionally comic way. Jane Cox’s theatrically exciting lighting complements the scenic effects, but Matt Tierney’s very active soundscape contains too many unidentifiable sounds. There’s also original music by Matthew Herbert in the 1920s jazz style, although, with a show that pays such attention to period detail, I’d be interested to know why authentic tunes were excluded.
After I left the theatre in the company of a couple of very experienced theatergoers, we stood on the corner and chatted about the production, each of us expressing our particular quibbles. As we did so, a couple of other theatre regulars we know came along, expressing great surprise to hear our carping. They were enthralled throughout, just as are, it appears, most of the professional reviewers, who consider this MACHINAL an important revival. For them this is a well-oiled machine, while for me its gears don't always mesh.