81. THE KILLING OF SISTER GEORGE 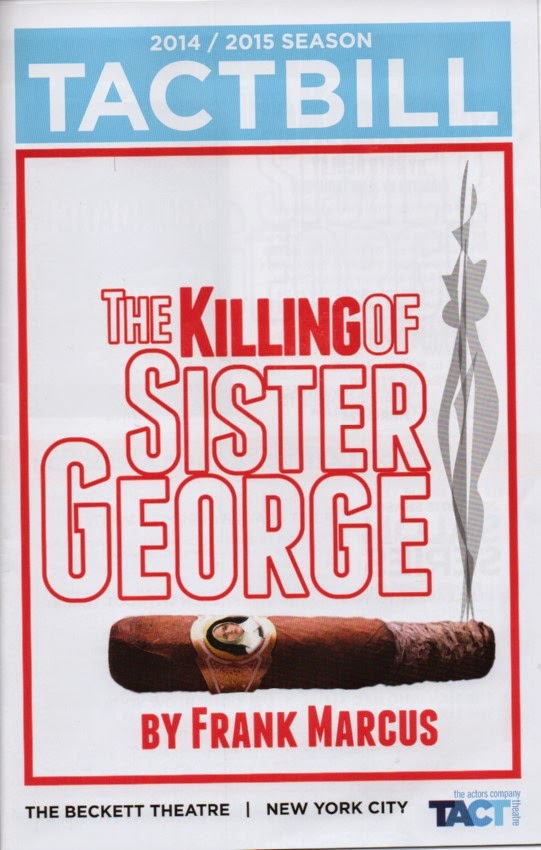 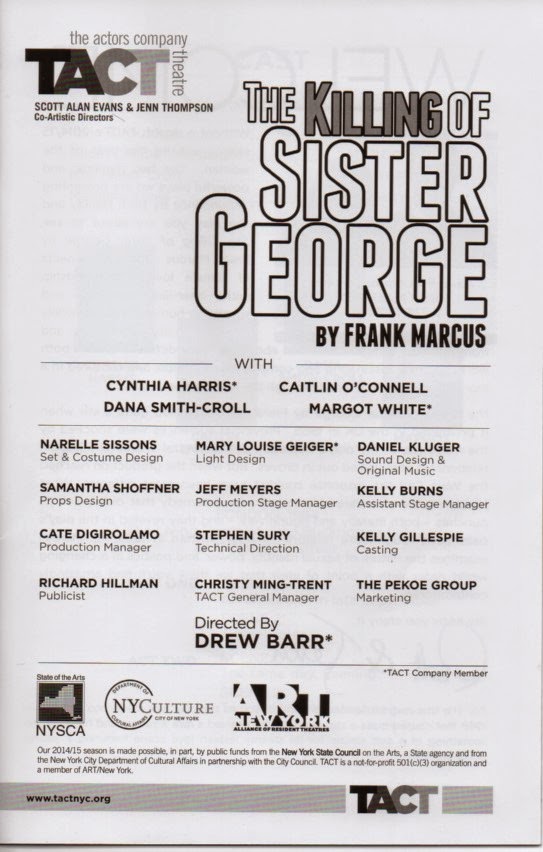 THE KILLING OF SISTER GEORGE, a British black comedy by Frank Marcus, now being given a misfired revival at the Beckett Theatre by the Actors Company Theatre (TACT), was something of a sensation following its UK premiere in 1964, prior to its West End debut in 1965. It opened on Broadway in 1966 and, despite its highly controversial depiction of a lesbian relationship, its star, Beryl Reid, won that season’s Tony for her performance as June Buckridge, a popular BBC radio soap opera star closely identified with her role as a district nurse named Sister George on a show called “Applehurst.” Part of the play’s success, no doubt, came from its delightfully unforgettable title, with its quirky suggestion of violence toward a sister with a man’s name. In those days, “sister” was the common British word for nurses.


What the title actually refers to is the decision by the BBC to eliminate Sister George from “Applehurst” because of a need to boost the ratings by drawing renewed attention to it. (The movie version made “Applehurst” a TV series and even showed scenes from it on the telly.) The play is as much a satire of broadcast producers’ preoccupations and worries—nothing’s changed there—as it is a depiction of the effect news of the character’s demise has on the eccentric actress who plays her. And, of course, there’s the fun in seeing how a celebrity’s actual persona differs from the one the public knows.


Even though people in real life call her George, June, a “rotund” (Marcus’s word), cigar-smoking, sharp-tongued, middle-aged alcoholic, with butch tendencies, is nothing like the kind, helpful, motorcycle-riding soul she makes her living portraying. She lives with Alice “Childie” McNaught (Margot White), her developmentally arrested (although actually in her 30s) flatmate, whom she controls like a dominatrix; at one point, she punishes Childie by forcing her to eat a cigar butt. The bearer of the bad news about Sister George’s killing (via demolishment by a 10-ton truck) is Mercy Croft (Cynthia Harris), a fashionable BBC executive and radio personality. June’s nastiness grows only nastier, and she hits rock bottom when Mercy offers her a new series in which she’ll play a cow called Clarabelle. Mercy eventually assumes a protective role toward the abused Childie and takes her away from the obnoxious June, who ends the play guzzling gin and mooing.

Usually performed within a realistic setting resembling an overstuffed, eclectically furnished London flat, albeit one filled with Childie’s dolls, the play is here given a surprisingly theatrical environment, a sort of dreamlike abstraction of Childie’s infantile preoccupations. Designer Narelle Sissons covers the floor with a huge rug that overruns the stage’s boundaries and curls up at the sides, while a large backdrop representing floral wallpaper of the 1960s, except in hugely overblown patterns, hangs like an incompletely unfurled curtain, its lower edge partly rolled up before it hits the floor. An oversized chandelier with huge conical shades hangs nearly to the floor at stage left. Tea and scones are taken at a table and chairs you might see in a kindergarten classroom, and the tea service uses Lilliputian china. These theatricalist touches, however, interesting as they are at first glance, aren’t matched by anything comparably offbeat in the performances.

Drew Barr’s direction struggles to find the right tone, which veers from cartoonish farce to serious drama, and the actors are mostly adrift in creating a sense of truthful honesty. Ms. O’Connell never finds the core of June’s character; her choices lack the creative spark necessary to find the vulnerability within June that would give her the touch of sympathy she needs to prevent her from being a two-dimensional bully.

Ms. White’s Childie (played by the great Eileen Atkins in the Broadway production) overdoes her squealing little girl business, and although her performance grows stronger there seems no apparent reason, other than her last name, for her thick Scottish accent. As an eccentric, fortune-telling neighbor, Madame Xenia, Dana Croll-Smith is dressed by Ms. Sissons in flowing pink chiffon with a pink wig: only her Ariana Huffington accent tells us this isn't a Halloween version of Patti Streisand.

The most interesting performance is that of Cynthia Harris, who uses her smoky voice and Tallulah-like self-awareness to bring an air of gentle campiness to the worldly-wise Mercy. Still, one wonders whether Ms. Harris isn’t a tad too old for the role. Her casting, as my guest observed, converts what, in the original, is a homoerotic interest in Childie into a maternal one, thus softening the conflict between Mercy and June. Mercy’s interest in Childie would be far more interesting if she were more than a mere do-gooder. (If you have doubts, check out the still surprisingly explicit sex scene added for the 1968 (!!) movie (which was rated X) between Coral Browne’s Mercy and Susannah York’s Childie here: http://www.youtube.com/watch?v=RhB-N7BpXX0.

THE KILLING OF SISTER GEORGE was a milestone in the depiction of gay characters in mainstream drama. The play itself doesn’t discuss homosexuality; it merely presents it as a given. But, unless an incisive director can nurture a well-integrated ensemble to produce characters with real depth and conviction, accompanied by an edgy sense of humor, it remains a period piece, curious for its snapshot of a time and place but making one wonder if, perhaps, the BBC didn’t have it right when they killed off Sister George.
Posted by Samuel L. Leiter at 6:17 AM