“Gray Is the New Black” 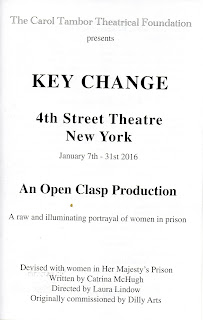 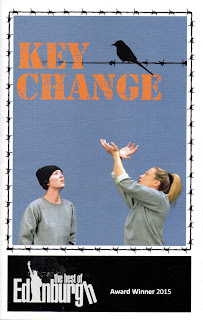 If you’re a viewer of HBO’s popular series “Orange Is the New Black,” about incarcerated women, I wouldn’t blame you for not wanting to trek down to the East Village in the middle of January to watch KEY CHANGE, an hour-long treatment by Catrina McHugh of much the same thing. This isn’t to deny the quality of the writing, staging (by Laura Lindow), and acting in this self-described “raw and illuminating portrayal of women in prison”; it did, after all, win the Best of Edinburgh Award at last year’s Edinburgh Fringe Festival. It’s only to suggest that, apart from the color added by its rough, sometimes impenetrable North Eastern English (“Geordie”) accents and its creatively imagined presentation, it offers little new to the conversation about the physical and mental abuse suffered by such prisoners, both inside and out of prison.


KEY CHANGE, devised under the guidance of the Open Clasp company by female prisoners at Her Majesty’s Prison Low Newton, was toured to men’s prisons where it was reportedly very well received by the male inmates, who are said to have gained potent insights into their responsibility for what had happened to their girlfriends and wives. (The press notes point out that the UK’s rate of female incarceration is among the highest in Western Europe.) It arrives during a season in which at least two other stylized prison dramas, one about women, AND I AND SILENCE (only part of which is set behind bars), and one about men, WHORL INSIDE A LOOP, have been produced Off Broadway, thus further rubbing off some of the freshness of the play’s subject matter.

Exemplifying “poor theatre,” the stage is nothing more than a square, black, open space bounded by strips of masking tape, which is also laid down by the actors during the performance to mark off discrete areas. At a desk up left sits Lorraine (Victoria Copeland), serving as stage manager and dressed in an inmate’s gray sweat suit, slouching as she reads cheap magazines, and cueing in the music/sound effects on a CD player (Roma Yagnik designed the soundscape). The only other scenic elements are two stacking chairs. Four terrific actresses, all of them white, Christina Berriman Dawson as Kelly, Cheryl Dixon as Lucy, Judi Earl as Kim, and Jessica Johnson as Angie, each in a gray sweat suit; Angie’s black wool cap is the only costume variation (apart from the women’s shoes). Aside from the middle-aged Kim, the others look to be in their late 20s or early 30s. Visual interest is heightened slightly by Ziggy Jacobs-Wyburn’s lighting, making the most of the limited equipment in the intimate 4th Street Theatre.

The women (occasionally assuming the roles of the men in their lives) talk about the prison layout, make phone calls to their kids and grandkids, quarrel, brawl, tell us how long they’re in for, recall their misguided love lives, marriages, pregnancies, domestic violence, and drug-taking. In crude, direct poetry they recount the things they miss most but only glancingly mention the largely minor crimes—none of them violent—that landed them here, almost as if their misdeeds were the natural consequence of the hard lives they were forced to endure.

They discuss prison life, what it was like when they first were locked up, how they learned to adjust, their in-house education about men that abuse women, their letters, and so on. There’s no single story or character to latch onto in this ensemble piece, however, and, despite its brevity, KEY CHANGE finds it hard to sustain the kind of interest in what comes next that might have prevented the boredom that ultimately ensues. Moreover, the play (and other media expressions of similar impulses) implies that these women—and, by extension, others like them—are victims of a system of male oppression; all are basically decent, just doing their time until they can rejoin their loved ones. A truly evil, unrepentant female prisoner? Might as well look for a needle in a haystack.

There are no props and the movement—integrating realistic behavior with mime, dance, and slo-mo (for scenes of violence)—is very carefully controlled; Holly Irving is credited with the “original choreography” and Holly “KijJala” Rose for “movement support.” The profanity-laced dialogue—delivered both conventionally and in fourth-wall breaking direct address—is filled with so many “Geordie” slang terms a glossary is provided for words like “zoppie” (prescription drugs), “gel packs” (disposable urine bags), “burn” (cigarettes), “gear” (heroin), and the like.

KEY CHANGE is an example of talented artists engaged in the theatre of good intentions, confronting an important social issue and hitting lots of worthy buttons but lacking the dramatic structure necessary to free it from its self-imposed confinement.