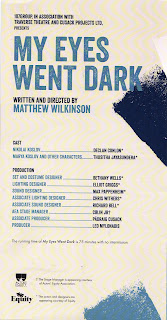 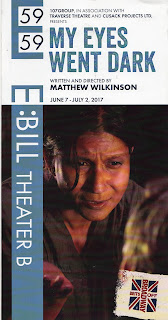 Lope de Vega, the Spanish Golden Age dramatist, said all you need for theatre is “three boards [or four: sources vary], two actors, and a passion.” That seems the guiding aesthetic behind My Eyes Went Dark, a British import written and directed by Matthew Wilkinson, now part of the Brits  Broadway Festival at 59E59 Theaters. This play, as dark as its title, was very warmly received when performed at London’s Finborough Theatre and Edinburgh’s Traverse Theatre; I have to admit, for all its potential, it left me cold.
Its plot, loosely based on a true story about the aftermath of a plane crash involving a Russian family, is performed with two actors, one playing multiple roles. Instead of boards its stage is a shiny black strip running, alley-style, between two banks of seats. On its surface, set designer Bethany Wells (who also did the costumes) has placed two simple chairs facing one another across the expanse. There are no props, not even tiny ones like the breath mints a character pops in his mouth or the cell phone he handles.

The passion part of Lope’s aphorism is represented mainly by Nikolai Koslov (Declan Conlon), a successful, middle-aged architect from North Ossetia, in the Caucasus, who moved temporarily to Nice, France, to oversee the building of an international hotel he designed. While flying to visit him, his wife and two young children were killed when their plane collided with another near Lake Constance, which borders Germany, Austria, and Switzerland.
My Eyes Went Dark tells in an episodic, sometimes elliptical, at other times straightforward manner how, over a five-year period, Koslov reacts to the tragedy, which becomes his all-consuming obsession. He converses with various characters (all played by Thusitha Jayasundera), including a therapist, a child, his wife, someone else's wife and daughter, and an airline executive. He’s especially distraught to learn that the air traffic controller at work when the plane went down, a Danish man named Thomas Olsen, is exonerated when the crash is deemed an accident.

Disturbed by the inadequate financial compensation offered by the airline, and its inability to apologize, and unable to erase the pain driving him mad, the only outlet for his rage and sorrow is to stab Olsen to death, for which he goes to prison. Was his behavior rooted in Caucasian tribal revenge practices? Is he a “caveman”? Released on appeal halfway through his eight-year term, he’s honored, ironically, by his fellow Ossetians, only for someone to pay him an unexpected, unwanted visit.
Sincere as all this is, and significant as are its concerns with vengeance, forgiveness, guilt, and responsibility, the cool, quiet, low-keyed, soporifically paced production sometimes almost made my own eyes go dark. The playwright depends on the considerable acting skills of the actress opposite Koslov to clarify who each character she plays is.

Jayasundera is versatile, able to adopt a variety of British accents that usually help identify who she’s playing, and she can turn on deep reservoirs of feeling when required. But it would help if Wilkinson’s approach weren’t quite so austere and he offered some small clues—the script, at least, provides character names—to each of her roles instead of making it a guessing game.
Jayasundera isn’t helped much by her disheveled hairdo and the bland, gray, smock she wears for all her roles. Conlon, wearing a white, tieless shirt, and black suit, whose jacket he removes for one scene, is less interesting; an obviously polished actor, he nonetheless seems too dryly removed for a man so consumed by sadness and anger. When his emotions burst out they seem more like theatrical displays than organic expressions.
For all Wilkinson’s unwillingness to employ conventional sets or props, he depends heavily on Max Pappenheim’s exceptionally expressive sound design, while persistent fog effects help Michael Griggs create nice moody lighting effects. Two metal stanchions standing on either end of the traverse form the only noteworthy part of the set, each hung with six traffic light-like lamps aimed toward the acting area. Griggs’s gloomy, usually dim lighting casts stark shadows, especially the overhead beams highlighting the actors’ facial structures.
Air traffic control is becoming a hot topic again with President Trump’s announcement that he’s seeking to privatize it. Only time will tell if such a questionable development leads to many other eyes going dark.