“Here’s a Night Pities Neither Wise Men Nor Fools:
A Report In Lieu of a Review” 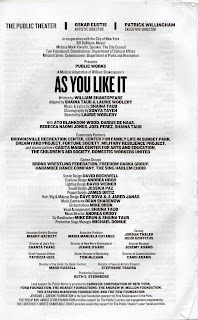 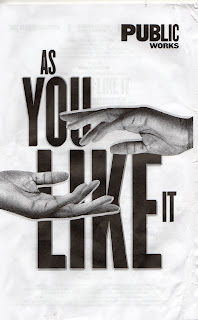 Blow, winds, and crack your cheeks! rage! blow! You cataracts and hurricanoes, spout Till you have drench'd our steeples, drown'd the cocks! You sulphurous and thought-executing fires, Vaunt-couriers to oak-cleaving thunderbolts, Singe my white head! And thou, all-shaking thunder, Smite flat the thick rotundity o' the world! Crack nature's moulds, and germens spill at once, That make ingrateful man!

Well, okay. Maybe it wasn’t Lear’s cataracts and hurricanoes, but it certainly was wet at the Delacorte Theater last night. 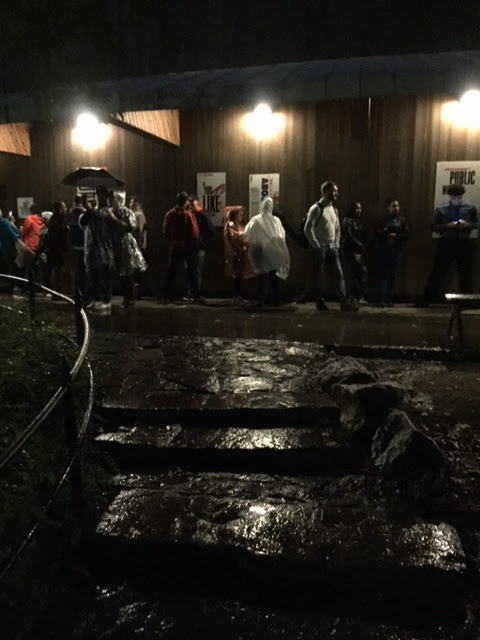 I love Oskar Eustis, the artistic director of the Public Theater. He’s one of the most creative, socially conscious, provocative (think his recent Trumpian Julius Caesar), award-winning, cultural figures in New York. One award he’ll never win, though, is for his meteorological predictions, at least not if his forecast at last night’s presentation of As You Like It at the Delacorte Theater is any indication.


It was already raining when I left my home in South Queens to take the hour and 15 subway trip to Central Park. For the first time in my seven decades of riding New York’s subways, someone was actually selling plastic ponchos, warning about the inundation the evening held in store. I demurred, thinking I was well enough protected, with my new umbrella (the kind that opens upside down), my baseball cap, a windbreaker, and a small towel. Turns out I was all wet.

When I arrived at the W. 81st Street station, I spotted a sign saying there was no weekend service there for my return trip and I’d have to take the bus downtown to get to the station I needed. This didn’t augur well for getting home easily should the show be delayed.

The rain was coming down steadily when I emerged but that didn’t stop hundreds of people, many holding umbrellas and wearing ponchos but others relatively unprotected, from trekking with me through the park to the Delacorte. Surprisingly, many others were lined up in the dimly lit area outside the theatre, hoping the torrent would cease in time to see the show, scheduled to open at 8:00. 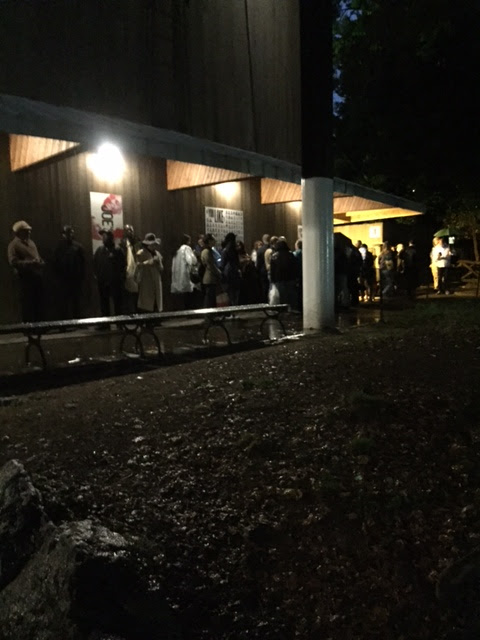 Rain had been predicted all day but these impervious theatregoers, hungry for one more jolt of outdoor Shakespeare before the summer ended, weren’t buying it, even as they stood with open umbrellas or sought refuge under the theatre’s eaves. I, going as a reviewer, was required by Public Theater policy to attend regardless of the weather, but I was awestruck by the tenacity of these others, representing as true a cross-section of New York’s population as you could find at any single cultural event, high or low. 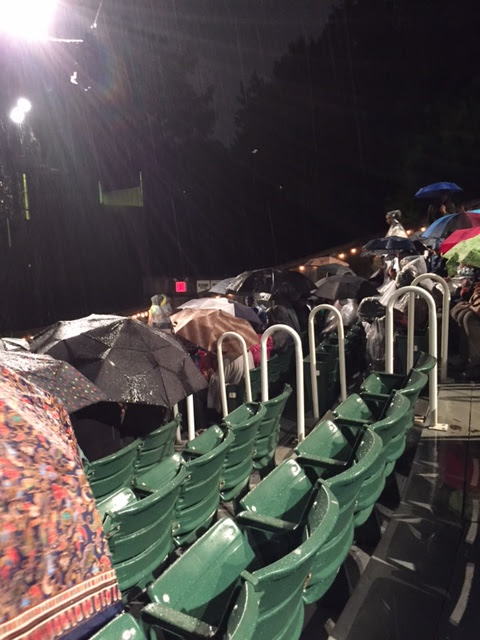 As 8:00 approached, I filed in, placing the small towel I’d brought over my drenched wooden seat. Like everyone else, I kept my umbrella open but, unlike at baseball games, for example, the audience was told that when the show started the umbrellas would have to close so people behind them could see. When it came time to close our umbrellas, a woman in my row resisted and had to be instructed several times to comply. 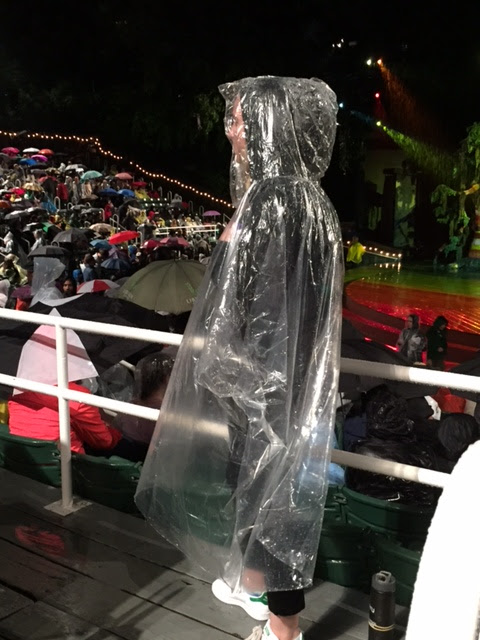 It’s also the Public’s policy not to cancel a performance if there’s even the slightest possibility of the weather improving. And that’s just what happened in 2014 when I saw Measure for Measure in the park, an experience I described in this report. The current production was under additional pressure to perform.

Unlike the Public’s regular Shakespeare in the Park performances, which run for several weeks each, this is an annual, five-performance production given under the company’s Public Works rubric. Now in its fifth season, Public Works was founded by the gifted Lear de Bessonet in 2012, and is dedicated to inviting “diverse communities from across New York to join in creating ambitious works of participatory theatre,” much like the pageant productions of the early 20th century created by Percy MacKaye. 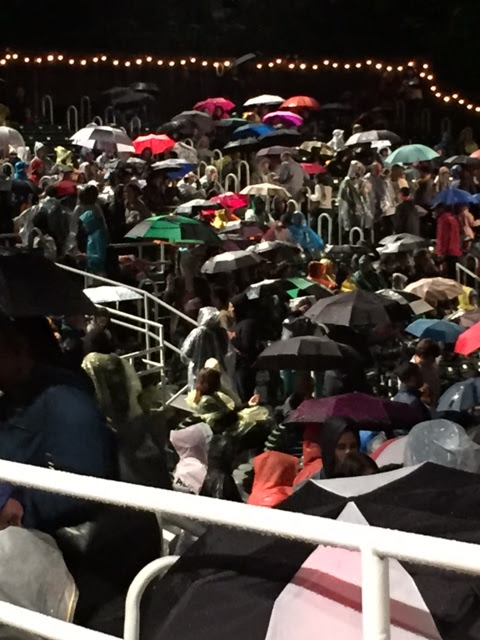 As Eustis said during one of his soggy pre-show pep talks, 200 professional and amateur performers from a wide variety of community organizations were champing at the bit backstage, waiting for a chance to strut their stuff. It’s easy to understand his dilemma in wanting to get the show off the ground; these dedicated people, ranging from seniors to young children, don’t deserve to lose a minute of what, for many, will be a once-in-a-lifetime experience.

Eustis addressed us twice, first, at 8:10, to say he’d learned there was a chance for “a window” of clear weather to be arriving in about a half hour, and that the composer-lyricist-singer Shaina Taub, who had turned Shakespeare’s play into a musical with director Laurie Woolery, would entertain us in the meanwhile. She did just that, performing several of her terrific, upbeat numbers with the band in a covered, raised pavilion. As this video shows, even the ushers were dancing in the aisles. But the window remained shut.
Later, Eustis, wearing a poncho but with his head uncovered, informed us that, after the stagehands had squeegeed the stage, the show would commence. We learned as well that Rebecca Naomi Jones, playing Rosalind, was having voice problems but insisted on performing; however, her vocals would be sung by Taub, who was also playing Jacques (another woman, the distinguished actress Ellen Burstyn, will essay Jacques in the forthcoming CSC revival). At 8:35, the show began, despite the intensity of a downpour vividly highlighted in the overhead spotlights. 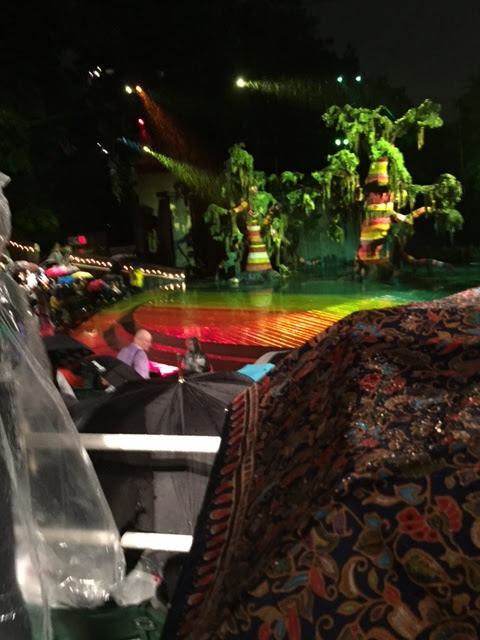 What ensued was perfectly charming, despite the showers; the songs sounded wonderful, the acting was crisp and clear, the modern-dress costumes were delightful, and the enthusiasm was infectious. Still, I couldn’t stop hoping that no one slipped, that the costumes wouldn’t be ruined, and that none of the players (much less yours truly) would get sick.

After 20 minutes of increasing discomfort, in which I was split between personal and professional concerns, I chose to make my departure. At first, barely any others accompanied my lonesome journey back to the bus stop; by the time I reached it I spotted dozens of soaked spectators exiting the park. I can’t be sure but I assume the show was stopped.

From the little I saw this As You Like It promises to deliver both musically and visually; I regret I’m unable to catch it again before it closes. Given the size of its company, it’s unlikely to be revived although there’s always the possibility of a pared-down version getting a shot.

After Houston, this Delacorte deluge was just a drop in the bucket. I commend those waterproof theatergoers who endured it longer than I even if this As You Like It wasn’t just as they might have liked it.

As You Like It
Delacorte Theater
Central Park at 81st St., NYC
Through September 5