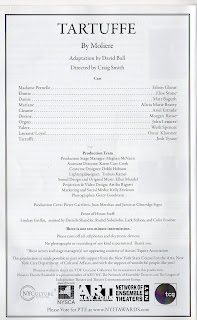 Molière’s Tartuffe (1647) is universally recognized as one of the greatest classical comedies, a work that is not only funny but satirizes a dangerous social phenomenon, i.e., religious hypocrisy and susceptible believers. You’d never know it, though, from the play’s earnestly solemn, only rarely laugh-provoking revival by the Phoenix Theatre Ensemble at the Wild Project.


Directed by Craig Smith more as if it were a dour tragicomedy than a brightly satiric comedy—except for a hopelessly inept attempt at farce during the famous seduction scene—the play’s central issue remains painfully pertinent.

I mean, of course, how gullible people can be sucked in by snake oil sellers and refuse to acknowledge what anyone with half a brain can see. At a time when, Donald Trump, one of the greatest con men of all time, is president of the United States, an incisive production of Tartuffe can make a powerful but also hilarious statement on current events.

Everyone knows the president’s declaration that he could shoot someone in the middle of Fifth Avenue and his followers would still vote for him. Such hubris is essentially the motive force in Tartuffe, in which an obvious phony, masking as a religious zealot, gains such strong backing from a wealthy family head named Orgon (John Lenartz) and his elderly mother, Madame Pernell (Eileen Glenn), he believes he can get away with anything, and almost does.

Orgon clings tenaciously to his faith in Tartuffe’s authenticity despite the disbelief and ridicule of his wife, Elmire (Elise Stone); his son, Damis (Matt Baguth); his daughter, Mariane (Alicia Marie Beatty); his wise brother Cleante (Ariel Estrada); and, most especially, his cocky, wisecracking servant, Dorine (Morgan Rosse). Only when he actually sees with his own eyes the equivalent of Trump shooting someone on Fifth Avenue, that is,  Tartuffe’s attempt to seduce Elmire, does he finally come to his senses (unlike, so far, POTUS’s base).
And, even in this otherwise undernourished production, we greatly appreciate Orgon’s agonized frustration when his mother refuses to hear Orgon’s accusations against her blessed Tartuffe, dismissing them as “rumors,” as her newly enlightened son practically tears his remaining few hairs out at her blindness. Readers with friends and family members who disagree over our current political situation will know just how Orgon’s family feels about their elders' leanings.

And when Tartuffe’s illicit activities in trying to fleece the household are uncovered by the throne, audiences should experience something similar to that of anti-Trumpers at today’s news regarding indictments by the special counsel. In Smith’s production, the exposure of Tartuffe’s undoing is presented not by an onstage actor but by an unseen, electronically amplified, “voice of God”-like announcement representing one of Craig’s several ineffective attempts to infuse his otherwise conventional staging with heightened theatricality.

David Ball’s rhymed verse adaptation occasionally arouses a chuckle, but the overall tone is so serious that the play’s satirical intent is diminished. Orgon is played by Lenartz with such narrow-minded obsessiveness he becomes more a villain than a victim; he’s miles away from the comic edge Orgon’s foolishness requires. Partly, the fault lies in directions like having Act One end with Orgon mounting the impious faker in an orgasmic moment of devotional passion as the lights do weird things and the music (by Ellen Mandel) soars.
The cast is decidedly uneven. Glenn makes a suitably misguided Madame Pernell, and Stone, her ample bosom pushed up so high she seems to be hiding a pair of bald men in her décolletage, does well enough as Orgon’s wife.
The others represent a range of hues on the pale to colorless end of the spectrum. Particularly problematic are Rosse’s Dorine and Tyson's Tartuffe. The former should be a sparkplug of comic confidence, not the mousy, whiny high school girl she suggests; the latter comes off as a characterless, heavily tattooed fanatic lacking in charismatic and sexual magnetism, regardless of a program note suggesting the opposite. It's difficult to believe any rational being could be caught in his snares, nor is there any way this guy would ever become a reality TV star.
Tartuffe, by the way, is constantly shadowed by his similarly cowled acolyte, Laurant (Oscar Klausner), who later appears in a surprising turn as a bizarrely foppish Loyal. The latter's words are spit out with such a caricaturishly posh, machine-gun paced accent you pay more attention to his prancing antics than to anything he’s saying. On the other hand, he’s probably the production’s most memorable feature.

No set designer is credited with the bare stage approach: three white walls, doorless passages upstage right and left, and decorative projections on each wall by Attilio Rigotti. Tsubasa Kamei did the occasionally heightened lighting. A long table and stools are the only scenic props. The effect, enhanced by Debbi Hobson’s attractive period costumes (sans wigs), is actually in keeping with the simplicity of neoclassical staging in Molière’s time.

But why the cast appears in white dishabille throughout Act Two, the men shirtless or their shirts open to the waist, the women in their undergarments, is a question for the sages. There are at least two times when the cast is instructed to put their clothes back on but, without Ball’s adaptation available, I don’t know if this is in his script or is an unnecessary directorial gimmick. It’s certainly not in Molière.

If anything, one can imagine the actors being stripped of their garments when Tartuffe reveals that he now owns all Orgon’s family’s possessions. Otherwise, it’s a distracting choice further underlining that this Tartuffe has no clothes.