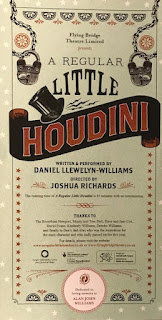 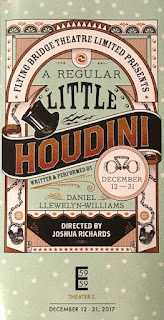 Any play with the name of the Hungarian-American magician and escape artist Houdini in its title is going to have instant appeal for lovers of magic. The great Harry himself makes a couple of appearances in A Regular Little Houdini, a generally intriguing, charismatically performed, 65-minute, solo narrative at 59E59 Theaters' tiny Theater C. Magic
tricks, however, are in too short supply.

Instead, we’re invited to experience the magic of theatre in the good-looking person of Welsh writer-performer Daniel Llewelyn-Williams, who, playing a fellow named Alan, tells a fact-based story related to Houdini’s early 20th-century appearances in the seaport town of Newport, South Wales.
Llewelyn-Williams weaves a narrative connecting Houdini to the 1909 Newport Docks disaster in which many lives were lost when a huge sea lock under construction collapsed. Excellent background on both Houdini and the collapse, during which a 17-year-old boy displayed great bravery, is provided in the program.


Alan appears in a bare, black-painted space, simply lit, wearing a derby and a working-class, Edwardian suit topped off with a wool scarf around his neck; he holds an old-fashioned suitcase, speaks in a thick (sometimes too thick) Welsh accent, and has an obvious limp in his gait.

He addresses us as though on the stage of Newport’s grand old Lyceum Theatre, since demolished, reminds us of when Houdini stood there, and lauds the great prestidigitator’s “amazements,” as he later calls them.
Alan then assumes the persona of himself 35 years earlier, in 1905, the year of Houdini’s first local visit, after which he introduces us to the town and his family, most importantly his grandfather, Gami (the local chief constable), and his hardworking, hard-drinking dad, a docker.

Then, as he changes voices and accents to bring various colorful characters not to mention Houdini himself, to life, Alan tells us of how someone called him “a regular little Houdini” when he picked his pocket as part of a pub routine.

He offers a few examples of sleight of hand, talks about Newport’s history and the Irish who fled there amid great danger from drowning during the famines, describes his experiences as a lock-picking “self-liberator,” and recalls Houdini’s famous local feats and why they upset old Gami so much.
He continues covering the nostalgic Newport scene, including a description of a local engineering marvel called the Newport Transporter Bridge that he found a perfect playground for his boyhood ambitions to create his own Houdini-like amazements.

Alan’s breathlessly detailed description of a dangerous bridge exploit, which explains where his limp came from, is succeeded by an exciting account of the sea lock tragedy and its mournful aftermath. Yet another thrill-a-minute tale of Houdini’s return visit and Alan’s derring-do involvement in it is described just before a touch of hocus-pocus concludes the show.
Llewelyn-Davis’s minimalist, vocally and physically highly expressive performance, well-directed by Joshua Richards, has toured the world and won several awards. A program note says it was inspired by the actor-writer’s father, also named Alan, who died this year, although, of course, the time period is well before when he could even have been born.
With its familiar but always pertinent message about following your dream, regardless of your circumstances, A Regular Little Houdini pulls a rabbit out of a hat to create a moment of entertaining theatrical magic. A little more conventional magic, though, would have made it even better.