“The Gay Politician, The Writing Teacher, The Kosher Butcher, and His Dead Wife” 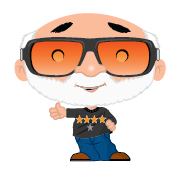 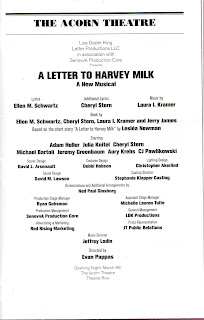 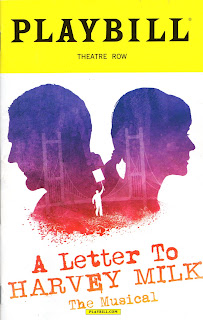 A Letter to Harvey Milk: The Musical, a pleasantly engaging but uneven new show at the Acorn Theatre, is an adaptation of one of the stories in Lesléa Newman’s nine-story collection of the same name in which the author examines issues of sexuality within the context of Jewish heritage.


Set in San Francisco in 1986, eight years after the assassination by Dan White of Harvey Milk, the politician and activist who proudly proclaimed his gayness, the story focuses not on Milk (nicely limned by the exuberant Michael Bartoli) himself but on the man in whose memory and imagination he appears.
That man is a European refugee and widower, Harry Weinberg (Adam Heller), a faintly-accented kosher butcher who moved to San Francisco from Long Island, and who claims to have come to America before World War II. Harry so deeply misses his beloved wife of 33 years, Frannie (Cheryl Stern), who died seven years earlier, that, when he begins to suffer from nightmares, her spirit becomes a reassuring presence in his life.

Frannie makes her first appearance when she emerges magically in his bed (much like the way Laura popped out of the couch a few seasons back in the Cherry Jones Broadway revival of The Glass Menagerie). She then serves throughout as a sort of nudging conscience, overseeing his behavior, and even singing and dancing with him when it suits the show’s fanciful mood.
Once Harry and Frannie are introduced, the script flashes back to the recent day when Harry, visiting a senior center, feels so sorry for Barbara Katsef (Julie Knitel), a 30ish, Jewish writing teacher from Connecticut for whose class no one is enrolling, that he signs up himself. Despite his initial reluctance and insecurity he’s encouraged enough by Barbara to fill his notebook with material based on his life.
Barbara is greatly excited when, in response to an assignment, Harry writes a lovely letter to the late Harvey Milk, a fellow Long Islander with whom he quickly bonded after meeting him at Harvey’s camera shop. That’s because she’s a lesbian who idolized Milk for his outspoken advocacy on behalf of gay rights. So good is the letter that Barbara will want to have it published.
Thus we get the basic setup, a growing closeness between the lonely Harry, the aging Jew (the script says he’s about 70 but the actor looks younger) with traditional values, and the equally lonely Barbara, the lesbian cut off by her sexuality from her thoroughly assimilated, conservative parents, who taught her barely anything of her heritage, much less Yiddish expressions. Her father, in fact, was so anxious about being spotted on a New York visit to Katz’s Deli that he disguised himself with sunglasses and a cap.
Not much happens during this Old Jewish Man Meets Young Jewish Woman section of the script, apart from expository material about Milk, Harry and Barbara’s increasingly fond father-daughter relationship, and Harry’s teaching his teacher conventional Jewish things, smothered in the familiar attitude about laughing in the face of life’s suffering.

This includes a trip for kugel to Plotkin’s Deli, where the old-style Jewish waiters kibitz, tell jokes, and get the uncertain Barbara to crack some of her own. A Letter to Harvey Milk sometimes piles on the Yiddishkeit the way Katz’s piles the pastrami on a club sandwich.

Keeping things light are the amusing interruptions of the adorable but shikse-shaming Frannie, who sings the show’s best song, “What a Shanda” (shanda=shame). Its deliberately strained couplets, especially those that rhyme with shanda, are delivered by Stern with show-stopping chutzpah.

WHAT A SHAME, WHAT A SHANDA
A GORGEOUS FACE LIKE HERS SHE’S GONNA SQUANDA?
ON SOME SCHLUMPY GIRL WHO DRESSES LIKE A GUY?
TELL ME WHY, TELL ME WHY!

The Old Jewish Man Loses Young Jewish Woman part comes when Harry, able to accommodate himself to Barbara’s sexuality (even coining the Yiddishism “lesbianke”) suddenly reveals with unexpected anger that he will not abide her being public about it. The vigor of the placid Harry’s position, which sharply contradicts everything he appears to have represented until now, seems an artificial device to light a firecracker under a relatively stagnant plot.

The far-fetched explanation for the change in his behavior suggests that it’s instigated by his memory of how Milk’s death was tied to his uncloseted lifestyle. Even more difficult to accept is how it’s connected to something Harry experienced years ago, presented in a big reveal that shifts us to another time and place, jarringly altering the lightly sentimental tone to which we’ve grown accustomed.

Not to fear, of course: the Old Jewish Man Gets (in a manner of speaking) Young Jewish Woman part of the structure is waiting patiently to bring the piece to its satisfyingly heartwarming conclusion in which we learn once again the live-and-let-live lesson that we’re all in this together and it’s okay to be proud of who you are.

San Francisco is charmingly evoked by David L. Arsenault’s unit set, which cleverly incorporates elements of the city’s famous Victorian architecture. Christopher Akerland brings it to life with his sensitive lighting. And Debbi Hobson provides suitable, character-defining, everyday wear, from Frannie’s stylish white- and black-checked jacket over a simple black dress to Barbara’s casually unkempt jeans and sweater ensemble.
he leads are all excellently cast, with the tall, blond Knitel, a kind of lanky Zoe Kazan, bringing acting subtlety and a sweet soprano to Barbara, in contrast to the everyman quality of Heller’s beautifully underplayed Harry. Anyone who grew up in a middle-class Jewish home back in the day will recognize the perfectly put together mixture of kvetching affection embodied by Stern’s pitch-perfect Frannie.