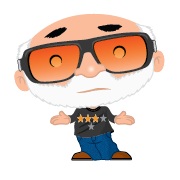 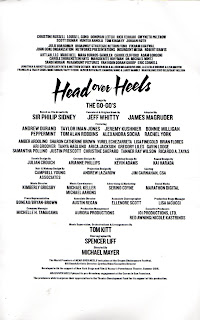 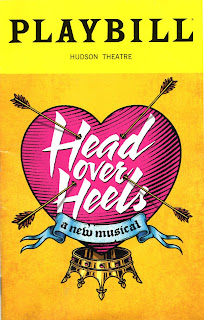 I may not have been one of them but the night I saw Head over Heels—Broadway’s new jukebox musical with a pop music score by the Go-Go’s, the all-female, new wave, 80’s band led by Belinda Carlisle—many audience members were clearly head over heels about it. Among that enthusiastic crowd was my middle-aged daughter, who (unlike me) knew and relished every song and got a kick out of the way they were mashed into the idiosyncratic book, written by Jeff Whitty and adapted by James Magruder.
Actually, Whitty’s book is itself an adaptation, being a hip, tongue-in-cheek reinvention of a classic text (part pastoral romance, part drama) by Sir Phillip Sidney, written in the late 16th century and formally known as The Countess of Pembroke’s Arcadia, or The Arcadia for short.
In this regard, Head over Heels, which premiered at the Oregon Shakespeare Festival and was later seen the Curran in San Francisco, appears to have opened yet another avenue to drive down for jukebox musical creators. Such shows typically use one of several templates to present a medley of well-known songs from one or more writers, singers, groups, or genres. They either present a bookless playlist (Smokey Joe’s Cafe); use the music to tell a story with some biographical relation—fully plotted or merely outlined—to the artists represented (Beautiful or Motown); or tie the songs together by means of a fictional plot (Mamma Mia!).

Head over Heels, however, takes the rare step of adapting (with obvious distortions) a preexisting text and finding ways of making the songs work within it. Indeed, if the score Shaina Taub wrote for the current adaptation of Shakespeare’s Twelfth Night in Central Park were made up of standards rather than new material it would be a sibling of what Whitty and Magruder have made of The Arcadia. Sidney’s original, in fact, is filled with the same kind of confused sexual relationships Shakespeare uses in Twelfth Night, of which Whitty takes full advantage.

And, given the historical proximity of Sidney to Shakespeare, who definitely felt his influence, it’s impossible not to think of the Bard while watching Head over Heels. Partly this is because of its determined use of faux-Elizabethan language but it’s also because of its themes and subject matter. With its cast dressed (and cross-dressed) in Arianne Phillips’s imaginatively heightened versions of Renaissance clothing, touched here and there with contemporary notions, the show retains the skeleton of Sidney’s plot.
At its heart are Basilius (Jeremy Kushnier), king of Arcadia, and his wife, Gynecia (Rachel York), whose mutual hots have cooled. Then there are their two daughters, the perfectly beautiful older daughter, Pamela (Bonnie Milligan), who rejects all her male suitors, and the plain, younger one, Philoclea (Alexandra Socha), in love with the handsome young shepherd, Musidorus (Andrew Durand).
For comic secondary characters we have the handmaid Mopsa (Taylor Iman Jones), on fire for Pamela; Mopsa’s father, the king’s comic sidekick and viceroy, Dametas (Tom Alan Robbins); and the Oracle of Delphi, Pythio (Peppermint), a flamboyant transgender performer with all that sass. Backing everyone up is an ensemble playing Arcadians and others, including Musidorus’ sheep (bah) and Pythio’s minions, the Owlettes (who?).
Arcadia’s wellbeing is signified by its having “the beat,” captured in the company’s rousing opening number to “We Got the Beat.” Soon, the Oracle of Delphi declares that Arcadia will lose the beat if each of four prophecies it pronounces comes true (signified by a colored flag falling from the skies). The king, especially concerned that a rival king will overcome him, does all he can to prevent disaster.

As the show bounces energetically through its two hours and 10 minutes, a succession of farcical developments transpire involving mistaken identity shtick based on gender-bending and transgressive sexual preferences. Much of this is inspired by Musidorus’ disguising himself as a blond-tressed Amazon in a Madonna-like, pointed-boobs breastplate, thereby embodying both male and female behavior. Shakespeare, of course, typically played with women dressed as men being the object of the male gaze, while Musidorus’ disguise (as in Sydney) as a woman opens the door to other possibilities.

Bawdy humor runs rampant, both verbally and physically. Pamela, for example, as yet unaware of her predilections, struggles while writing verses to find a word that rhymes with “China” (given the context, you get it at once). And just before she names the rhyme for “runt” the book conspires to stop her. When a double entendre needs a push (as it often does), the actors are perfectly willing to bump a hump or whatever is necessary to get the idea across.

Musidorus is so prone to speak in the densely literary language others call Eclogue (“Ah. Were you but content with me to dwell/On rudesby’s cot in the beaver’d bank our home/Shoot the fardels blow, or with osier-wand/Fadge not the puling cock!”) that he’s scolded for not speaking English. And then there’s the English itself, with its “doths,” “thees,” and “thous,” and mingling of archaisms with modern words and concepts (as when Pythio uses the self-descriptor “non-binary plural”).
Worked in through the twists and turns is one Go-Go’s song after the other, among them the title song, “Beautiful,” “Vision of Nowness,” “Cool Jerk,” and such Belinda Carlisle solos as "Mad about You" and “Heaven Is a Place on Earth.” The latter will sound especially familiar, even if your musical IQ mixes Go-Go's up with Gaga, mainly because it’s ubiquitous on one of those insurance company commercials.

All are given the full treatment by a talented, big-voiced company, with lots of modern-day dance moves choreographed by Spencer Liff. The songs, though, contain nothing suggestive of the play’s period and, for all their rhythmic charms, are filled with so many banal, repetitive phrases (the beat being all, of course) and such a lack of character revelation that they do nothing for the Arcadian plot other than to highlight a passing emotion.

Talented as the cast is, under Michael Mayer’s direction it performs as though in a broad burlesque; in fact, the show resembles early, pre-stripper, baggy-pants burlesque, a form created in the 17th century to mock theatre with an inflated sense of itself. Given the dearth of truly funny thespians, the show is often sophomorically silly, with too much self-conscious mugging, signaling of jokes, and playing to the gallery, as if everyone thinks they’re in the funniest show on earth, or that it would be if they tried hard enough.

Bonnie Milligan, an actress-singer with Melissa McCarthy-like physical attributes, is deliberately cast against type as the preening beauty, Pamela. She’s got the best comedic chops, revealed in some chill moves and line deliveries. Andrew Durand’s Musidorus also reveals funnybone gifts, shown notably during an extended bit where, cross-dressed, he goes back and forth between femme and macho gestures. Regally commanding, Rachel York as Gynecia handles her raunchier moments with dignity; you know her Gynecia will be a worthy monarch when Arcadia shifts from patriarchal to matriarchal hands.
As Philoclea, Alexandra Socha, whose costume and headband suggest Pocahontas more than the Renaissance, has a big voice for her petite frame. The attractive Taylor Iman Jones, playing Mopsa, also sings well but one wonders if she wouldn’t be more interestin if made to look ugly, as Sydney intended her. Tom Alan Robbins’s Dametas works too hard at getting laughs, and Peppermint, the first transgender performer with a principal Broadway role, does little more than give Pythio the familiar bitchy sarcasm; her serpentine head moves, though, are enviable.
Kevin Adams has put a lot of effort into the often spectacular lighting, and Julian Crouch’s Renaissance sets—including a palace backdrop taken straight from Vicenza’s Teatro Olimpico—convey the period. He also provides a few more fanciful images, as when a giant serpent descends from the flies or when Mopsa vacations on Lesbos, singing “Vacation” as mermaids and fish splash in the phony waves around her.

Head over Heels is a must-see for Go-Go's fans. For everyone else, they’ll have to decide for themselves if they should go-go see it.