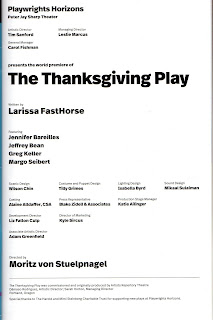 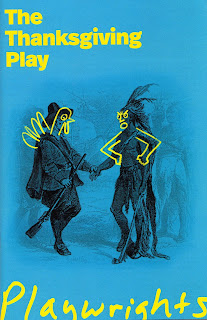 At this very moment in 2018, there are many schools across the US where children are preparing projects, including plays, depicting the traditional story of Thanksgiving. That story, of course, would feature pilgrims (historically, Separatists) and Indians (now American Indians, Native Americans, First Nations, or simply indigenous peoples) in 1621, feasting together in peace—probably on an historically inaccurate turkey and stuffing—to celebrate a bountiful harvest following a year of devastating hardship.

In The Thanksgiving Play, an endearingly funny, considerably educational, satirical farce by Larissa FastHorse, who identifies as an indigenous person, we get a drumstick-in-cheek lesson about just how problematic that story is. Originally produced at the Artists Repertory Theatre, Portland, OR, it’s now at Playwrights Horizons.
In a program note, FastHorse describes the familiar account of the early interactions of white settlers and indigenous peoples as a lie: “That which was recorded and reproduced was usually an intentional choice to support governmental policies of manifest destiny and genocide to make America larger, wealthier, and great.”

This is serious stuff, capable of inspiring reams of historical, political, anthropological, and ethnographic discourse. However, FastHorse pulls off the remarkable feat of expressing her dismay at the distortions by ridiculing them mercilessly while simultaneously making hilarious fun of political correctness. Plays by Native Americans are rarities on the New York stage. Hopefully, The Thanksgiving Play will open the door for others.
The setting is a conventional classroom (precisely designed by Wilson Chin and lit by Isabella Byrd); in it are four theatre artists—a director and three actors—joined to create a politically correct play about Thanksgiving. The frantically optimistic director, Logan (Jennifer Bareilles), is a high school drama teacher who’s received a grant with which she wants to produce a 45-minute work of “devised theatre,” in other words, one created improvisationally in collaboration with her cast.
The actors, all white (and all so comically perfect I won’t say anything further about them), are her slacker boyfriend, Jaxton (Greg Keller, Belleville), a second-rate street performer, yoga practitioner, and obsessive PC advocate; Caden (Jeffrey Bean), a middle-aged elementary school teacher and aspiring playwright, who uses picture books to teach the others about Thanksgiving; and Alicia (Margo Seibert, Rocky), a gorgeous actress whose guileless simplicity appealingly combines talent, ego, and ignorance.

Alicia was hired mainly because Logan, whose grant depends on her hiring a Native American, saw a headshot depicting her in indigenous guise and assumed that was her ethnicity. When Logan, despairing, learns of her mistake, Alicia responds: “Whatever, it's theater.  We don't need actual Native Americans to tell a Native American story.  I mean, none of us are actual Pilgrims are we?”
Alicia’s heritage and colorblind casting in general thus join the many PC-related topics with which FastHorse stuffs her theatrical bird. Among these are veganism, yoga, feminine hotness, the commodification of sex, gender sensitivity, coded language, historical inaccuracy, public school prayers, meditation, female empowerment, white privilege, racial labels, and post-racialism.

Laughs are also generated at the expense of street theatre, improvisation, acting as a career, and rehearsal practices. Much of the humor stems from the characters’ well-meaning but comedically oversensitive tiptoeing around saying or doing anything inappropriate.

At several points, the cast drops character to don Tilly Grimes’s costumes in clever interludes representing variant Thanksgiving scenarios. The prologue, for example, begins with the actors lined up as three pilgrims and a turkey, singing, to the tune of “On the Twelve Days of Christmas” about the nine days of Thanksgiving. Another employs body puppets (also by Grimes) attached to the actors, whose own faces remain exposed, and in yet another the actors assume rebellious hip-hop attitudes.
Logan eventually has a brainstorm about the best way to dramatize Thanksgiving, one I’ll leave for you to discover. However—given how hard it is tell the story without offending someone—it couldn’t be more pointedly elegant.
Director Moritz von Stuelpnagel (Bernhardt/Hamlet) pulls these bits off just as effectively as he does the play’s fast-paced comedy, straight-faced cluelessness, and farcical mayhem, including football played—Ugh! (in more ways than one)—with a pair of bloody heads.
One comes away from The Thanksgiving Play feeling it’s impossible to dramatize controversial historical events in a way that will satisfy everyone. And why, for example, is the story of Thanksgiving automatically better because told by a Native American, even if it uses facts hitherto unexpressed? How much of a story’s power is lost if equity takes precedence over drama? And is even-handedness actually possible? That’s why Logan’s seemingly outlandish solution—sardonic as it may be—is so thoughtful.
In the real world, theatregoers will be thankful for Larissa FastHorse’s having exploded and explored the Thanksgiving story through satire both broad and subtle. The Thanksgiving Play deserves some thanksgiving of its own.