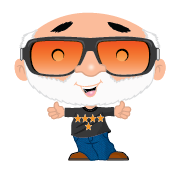 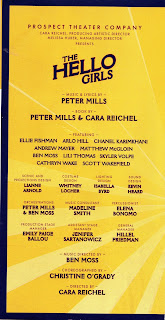 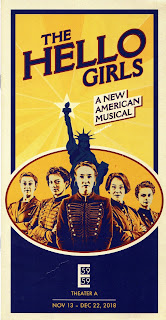 Only a couple of weeks ago, on Veterans’ Day (formerly, Armistice Day), America celebrated the 100th anniversary of the end of World War I. It couldn’t be more fitting that two shows about the conflict are now playing Off-Broadway, All Is Calm: The Christmas Truce, at the Sheen Center, downtown, and The Hello Girls, uptown at 59E59 Theaters, uptown. I haven’t seen the first yet but am familiar with its oft-told tale of how German and English soldiers, mortal enemies, ceased fighting on Christmas Eve, 1914, to celebrate the holiday. The story of The Hello Girls, however, was new to me and will likely be so to most of those who pay it a well-deserved visit.
The latest project by the Prospect Theatre Company, now in its 20th year of providing new musicals to the New York theatre, The Hello Girls belongs near the top of its noteworthy list of accomplishments. Unlike All Is Calm, which uses familiar music (like “It’s a Long Way to Tipperary”), The Hello Girls—apart from a snatch or two from songs like “Over There”—has a new score. It’s by the company’s gifted cofounder, Peter Mills, who provides 19 rousing, lyrically clever songs in a variety of modes from jazz to ragtime. Nearly every one works.

The solid, if overlong, book by Mills and Prospect cofounder/artistic director Cara Reichel introduces the true story of a largely unsung group of brave American women. These are the 223 bilingual telephone operators who, in 1918 (a year before women were allowed to vote), were recruited to join the Signal Corps and shipped off to France. There, they handled the complex telephone systems—in Paris and elsewhere, including the front lines—integral to fighting the Boche.
In two acts and 22 scenes, with a single intermission, the show focuses on an actual woman, Grace Banker (Ellie Fishman), called Chief Banker, who left her supervisory job with AT&T to head the first unit of female switchboard operators serving the U.S. Army overseas. She leads four women—Helen Hill (Chanel Karimkhani), Bertha Hunt (Lili Thomas), Suzanne Prevot (Skyler Volpe), and Louise LeBreton (Cathryn Wake)—loosely based on actual “hello girls,” as they were dubbed, and each with her own mini-story. One, for example, concerns the women’s having to pay for their own uniforms.
Over the course of its more than two a half hours, The Hello Girls keeps reminding us of the chauvinistic obstacles the women had to overcome, the disdain they faced as females in a male-dominated domain, the drawbacks to being put on pedestals when their boots were firmly on the ground, the hesitation to place them in dangerous situations, no matter the need, and so on. This harping on the obvious bloats the book with unnecessary material whose removal or paring down would greatly enhance the narrative drive, and likely enhance its feminist perspective. The Hello Girls is good enough to warrant a commercial production; its chances would be even better with some smart trimming.
As the last scene notes, after the war ended, these heroic women (Grace Banker received the Distinguished Service Medal) were denied veterans’ benefits because they were considered civilian contractors, not members of the U.S. Army. Only in 1979, when most were dead, did the Army acknowledge their rights. The full story is available in Elizabeth Cobbs’s The Hello Girls: America’s First Women Soldiers.
The Hello Girls is performed much like some of director John Doyle’s musical productions, with everyone in the ensemble (apart from Ms. Fishman) not only a singer-actor but a talented musician. Arlo Hill, who plays Lt. Joseph Riser, Grace’s immediate commanding officer, who is reluctant to fully accept the women as fellow doughboys, is a percussionist; Scott Wakefield, cast as Gen. John J. Pershing, Commander of the Expeditionary Forces, whose awareness of the need for telephone communication led to the women’s employment, plays the bass (which inspires a blandly funny pun).
Andrew Mayer, whose several roles include Pvt. Dempsey, plays piano and violin; Matthew McGloin, in the role of Pvt. Matterson, a telephone lineman who flirts with one of the women, plays the piano and accordion; Ben Moss, as Lt. Wessen, also handles the piano (two are used); while the women offer high-grade performances on the cello (Karimkhani), bass and piano (Thomas), guitar (Volpe), and clarinet (Wake).
Lianne Arnold’s set is an arrangement of wooden steps and platforms that allows for multiple locales. Intimations of the world of switchboards enhance the environment, as do the projections of period-derived videos and stills. Whitney Locher’s costumes do a fine job of capturing the military and civilian clothes of the day, Isabella Byrd’s lighting works overtime to convey the necessary atmospherics, and Kevin Heard’s sound design offers essential assistance to establishing the wartime background.
Cara Reichel’s direction is perfection itself in the graceful way she, aided by the dance moves of choreographer Christine O’Grady, shifts the 10-member ensemble around the set’s complex warren of levels and passageways. Reichel also deserves praise for finding such a multitalented company. Ellie Fishman’s Grace is every inch the strong, independent leader the part requires, and she sings with assured authority. Arlo Hill as her initially reluctant commanding officer, who insists on respect for one’s superiors, also makes a strong impression, as do all the others in the cast.
My strongest regret is that an unfortunate incident caused the already lengthy show to run past its announced ending time. Midway through Act Two, moaning could be heard from offstage, disconcerting the actors. One of them finally stopped the show because a theatregoer in an offstage passageway had taken sick. The delay, while the stricken person waited for medical assistance, lasted more than 15 minutes. Aware that the train I needed to get home to Queens was scheduled to stop running soon for track repairs, I had no alternative but to swiftly depart at a point the script later revealed was perhaps 10 minutes before the final curtain. My apologies to the company but my congratulations for what is, cavils aside, an important contribution to the season’s musical theatre scene.