With this review, Theatre's Leiter Side begins the posting of guest reviews for shows I'm not able to get to, mainly those in the Off-Off Broadway arena. 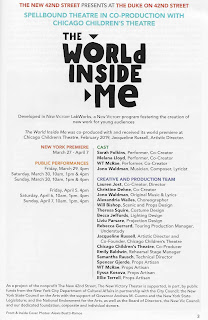 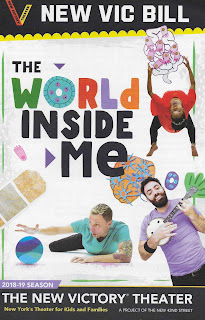 Like many other miniature audience members at the 10 A.M. production of The World Inside Me, my pint-sized plus-one, who is, in fact, one year old, stepped into a theatre for the first time. While musical activities and classes for toddlers are growing in popularity, this production introduces little ones to the theatregoing experience of watching a staged show complete with lights, music, choreography, and performers. Brought to the New Victory Theater by Spellbound Theatre, the performance is targeted to kids two and under (there’s a separate version for kids ages two-to-four).


A loosely educational show that explores the human body—for example, kids are invited to Velcro neurons onto a plushy brain—The World Inside Me doesn’t make too much of a fuss over “teaching” and focuses more on interactive play, movement, and tactical exploration. A nine-month-old might have few takeaways about the workings of intestines, but he’ll have a ball rolling around, well, balls (supercool mirrored ones, like the one in the photo).

You’ll want to arrive a good half-hour early, as the entertainment begins before the show’s official start time. Outside the theatre there’s a room set up as a sensory play space themed around the human body, offering something-for-everyone activities ranging from crawling structures and a toy station to a reading nook and music corner. This space acts as a smart way to get the little ones situated and comfortable before moving into the theatre for the performance.

Inside, the audience is invited to sit on cushioned seats on the floor surrounding an illuminated white stage (children and adults must leave shoes in an outside cubby if they wish to walk on the stage). Again, the kids are allowed a few minutes to get settled and explore before the performers begin to sing.
The cast is comprised of co-creators Sarah Folkins, whose bright sign language seamlessly complements her vocal performance; Melana Lloyd, whose artful movement draws the crowd; and W.T. McRae, who gets points for making my little date, Mateo, smile when he sang his name. Rounding out the ensemble is composer/lyricist Jono Waldman. Catch him in the corner with his banjo as he improvises comical lyrics throughout the production, largely in response to the kids’ activity: “Thanks for bringing your own ball.”

Lauren Jost’s direction shows a demonstrated understanding of engaging wee ones along with their grown-ups. In between several set musical numbers, the cast interacts one-on-one with children and their caregivers while Waldman strums lightly in the background. Just when these interludes start to lag, the lights change and another song begins, reeling the kids back into the narrative.

Will Bishop is responsible for the neat scenic design that involves light-up, chase-able footprints and video projections of dancing figures, as well as props like the large doctor’s kit—complete with giant Band-Aids—accompanying a song about boo-boos. The actors, donning white coats and stethoscopes, garner laughs when attempting to listen to audience members’ heartbeats through their shins, shoulders, and so on. When one of the actors came around to me, the little guy on my lap let out a cry (perhaps he was experiencing PPSD: post-pediatrician stress disorder).
Another little boy wore a pout as he stood before an actor singing about his boo-boo. “He’s worried,” his older brother explained, much to the delight of the crowd. As the babies engaged with the performers—darting to the stage, chasing balls, letting out squeals, and desperately trying to sneak behind the backdrop—it became apparent that they were part of the entertainment, creating a sort of show within the show.

And not just for the adults; for as many toddlers as there were roaming the stage, there were about as many who opted to stay seated and watch, as my own little date did. The young observers appeared wholly engaged; there was an impressively small amount of crying, and a break area for those who needed one.

The most magical moment in this 30-minute (just right!) show was an astounding instance of silence. As the cast engaged in rhythmic breathing, the audience was briefly entranced and didn’t make a peep. That’s no small feat when you’re talking about a whole lotta babies. The little ones may not remember that moment, but I hope their parents do and make a return trip to the stage. As New Victory Theater President & CEO Cora Cahan writes in her program letter, “The sooner kids are introduced to the joy of theatergoing, the more likely they are to want to come back.”

Elyse Orecchio studied musical theatre at Emerson College, acting at CUNY Brooklyn College, and English Linguistics & Rhetoric at CUNY Hunter College. She has worked in nonprofit communications for more than a decade. She lives in Sunnyside, Queens, with her husband Joe, kids Theo and Melody, and three muses cats. eorecchio@gmail.com @elyseorecchio