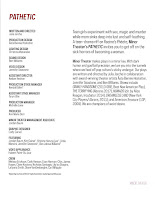 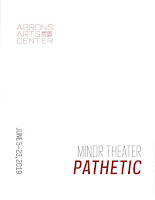 Julia Jarcho does not pull punches, and her company, minor theater, is not for the faint of heart.

Pathetic is the playwright’s newest complicated drama in her collection of wild, complicated dramas. Grimly Handsome, which won 2013’s Obie for Best New American play, is a haunting masterpiece characterized by structural sophistication, statuesque imagery, and monologues that express passionate, instinctual feelings despite complex language. Pathetic, a riff on Racine’s Phaedra, accomplishes a great deal of what her former work has succeeded in. While the play is a Gordian knot, it is an even greater presentation of clear, unadulterated passions.

The concoction is honest, challenging, and brilliant but also intentionally awkward, stiff, and brutally violent. Like Phaedra, Pathetic is about female desire and death, but here the themes are in manifest conversation. While Greek mythology works to repress female sexuality, Jarcho’s work exposes the hypocrisy, violence, and oppression of the concept.

Three sexually mature, teenage girls, Consuelo, Clara, and Millie, live in an unnamed American town, where Consuelo’s mother, Rosario, sinks into self-loathing as she ages. The three girls conjure an Eros monster-goddess in a tri-part ritual. Jenny Seastone, as Clara, is the ringleader, guiding the crew into chaos with aplomb. Kim Gainer, as the somewhat central figure, Consuelo, is a moral guidepost and counterpoint to Clara.
Clara murders Rosario for fear she will reveal her affair with the school’s yearbook counselor. The Eros monster resurrects Rosario, who becomes lecherous. Consuelo, influenced like any other teenager, is moved to lasciviousness and confusion. There are many funny, awkward moments, and a number of explicitly sexual moments. Intersecting impulses of desire result in violence and death.
The physical environment, designed by minor theater company members Ásta Bennie Hostetter (scenery and costumes) and Ben Williams (sound), is the detritus of the 90s American Southwest. Effectively eerie, and highlighted by quirky accents like a translucent backpack or an orange couch, the mood matches the unsettling invitations of the script, while the muffled sound design provides chants of faraway activity.

Each woman embodies some aspect of the desire matrix that is part of Phaedra. Rosario lusts after younger men. Clara is jealous of a potential rival. Consuelo is corrupted by sexual deviance. Millie, performed by Kristine Haruna Lee, also plays the Eros monster, titled Venus, an atypical presentation of the Goddess of Love. The play suggests that female desire causes death, both the literal death of characters, but also a moral and psychological death, a powerful obverse feminist statement.

Pathetic is written in the classical French meter of alexandrines, a repeated structure of 12-iambs typically used to balance a script that focuses on poetic rhyming, though it’s possible to completely miss this. It teems with teenage repartee and, since it’s Jarcho’s specialty, fantastic monologues. The writing allows the characters to explode, or more pointedly, implode, in poetic expression. For instance, Rosario, very well performed by Linda Mancini, who energetically embodies the play’s title, is able to express absence alongside lustful insistence through the poetry of her speeches.

Pathetic is a challenging play for many reasons. As stated, the language is elevated and the mise-en-scene is mystical and violent, which can be challenging. Jarcho’s staging, though, is notably flat, presumably because she the play itself is a type of enchantment. Ritualistic theater, as per the theories of Antonin Artaud, attempts to forcibly address the spectators’ emotions, which Jarcho does with unsettling results. The final scene finds the teenagers creating a ritual space from the performance area itself, with lights set up across the downstage lip, as they chant, “We’re the monsters.”

Pathetic’s ability to move you depends on your ability to enter the theatrical space. If you can, you’ll find it both extremely impressive and moving. But as with most pagan ceremonies, it may be be hard to understand.

Aron Canter studied theatre theory and alternative performance at The New School and is working toward an Art History masters at Hunter College. He has been a theatre and art critic, a supernumerary at The Metropolitan Opera, and currently works as a medical professional. aron.canter@gmail.com.
Posted by Samuel L. Leiter at 9:38 AM