(For the past few years, Theatre’s Leiter Side has enjoyed covering the expansive, community-based, Central Park productions sponsored late every summer by Public Works and staged by the gifted Lear DeBessonet. For some reason, however, I wasn’t invited this year. When the blog's talented guest reviewer, Elyse Orecchio, informed me that she had seen the show, I asked her to review it and she was kind enough to oblige. I hope you enjoy her commentary. SLL) 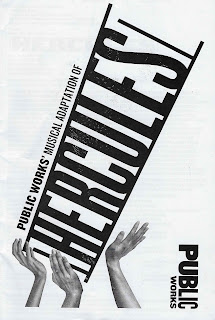 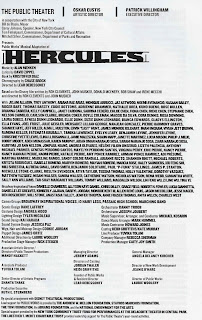 When one of the Muses introduced Hercules in the prologue to the show named after him, all the 30-somethings in the audience leaned forward in anticipation of the familiar line from another Muse, “Honey, you mean HUNK-ules!”

But it never came. Instead, she responded, “Not to objectify, but . . . ” And,  just like that, it was clear to us 90s kids who knew every word from the 1997 Disney movie that we were about to watch Hercules: the 2019 edition.
This was an audience happy to be in the al-fresco room where it was happening at the Delacorte Theater. It was the last night of the one-week engagement, and most of the attendees were there because they snagged a coveted golden ticket via lotto. It was clear that this was a theater full of fans.
The Public Theater mounted this musical adaptation of Hercules in partnership with the Public Theater's Public Works program, which aims to connect people via theatre. They enlisted hundreds of community members, from choral groups and a marching band to pint-sized children and white-haired seniors, playing all but the lead characters.

While the stage certainly feels crowded much of the time, this model works well in the many scenes that take place with sweeping amounts of Thebians. Kudos to choreographer Chase Brock, tasked with the feat of having them all dance!

The Delacorte is a fitting backdrop for this world of gods, titans, townsfolk, and monsters. Dane Laffrey’s understated scenic design consists mostly of some columns and stairs that are awarded ample displays of color, thanks to Tyler Micoleau’s lighting. James Ortiz’s multitude of magnificent puppets bring additional vibrancy to the stage.

This production sure knows its audience, and caters to the NYC theatregoers with a Hamilton reference (a quote about Hercules Mulligan, naturally), a Gyro stand, and a city
more concerned with affordable housing than a hero who can whack mythical monsters.

Happily, the crowd-pleasing moments also include classic favorites from the film: some of the biggest cheers of the night come from the line,  “Somebody call IX-I-I!” and the opening chords of the song “Zero to Hero.”
Directed by Public Works founder and resident director Lear deBessonet and featuring a new book by Kristoffer Diaz, Hercules is laden with not-so-subtle references to the disconnected era we’re living in, with a clear message that there is heroism in just getting through it. The powerful dare-you-not-to-cry ending has the community stepping in to fight in place of Hercules (Jelani Alladin), who has traded his god-like strength for love in a deal with the god of the Underworld Hades (deliciously delivered by Roger Bart, who sings Herc’s big number, “Go The Distance,” in the film).
This is a detour from the movie plot, and one that culminates in Alladin’s powerhouse performance of a new song, “To Be Human.” In the movie, Hercules chooses to remain mortal over joining the gods, but he does it for love. Now, he professes the power and majesty of toiling through the days and the strength and unity of a community that toils together. In other words, it ain’t about a boy being gooey-eyed over a pretty face anymore (though he’s still that, too).
Modern sensibilities are especially embodied in Megara, Herc’s love interest and Hades’s reluctant henchwoman. Like movie-Meg, she's forced by Hades to use her feminine wiles to seek out Hercules’s weakness (he doesn’t have any, except for his feelings for her). And like movie Meg, she is hardened toward men after trading her soul to save her boyfriend’s life, only to have him leave her (she's still reduced to a woman scorned; why this wasn’t updated, I don’t know). But as bitingly played by Krysta Rodriguez (TV's "Smash"), Meg is far from needing rescuing; good luck to anyone who tries! Megara has traded her iconic, hip-swiveling dress for a leather jacket and skinny jeans (costumes by Andrea Wood).

Meg’s rant, “Forget About It,” is one of a handful of new songs written by the film's composer ,Alan Menken, and lyricist David Zippel. Others feel like filler, and the song written for Hades, “A Cool Day In Hell,” is underwhelming, especially considering the underused capabilities of Tony-winner Roger Bart and comedian Jeff Hiller as Panic, Hades’s scene-stealing sidekick.

In another shift from the film, Herc’s immortal parents, Zeus and Hera, now passive-aggressively tell their son he lacks what it takes to become a hero and find his way back to Olympus. It's Hercules’s trainer, Philoctetes (seasoned Disney vet James Monroe Iglehart [Aladdin]), who allows the 18-year-old to finally be vulnerable--leading to a moving moment in which he-man Hercules breaks down because those closest to him won’t accept him unless he’s a hero. What makes an impact here is not his fear that he won’t measure up. It’s Herc’s frustration over the conditions others put on their acceptance of someone they love. In a time when we are questioning our expectations of what it means to be a man, particularly a black man, Alladin as Hercules finds his voice. His bio states, “This is for all those whose shoulders I stand on.”

As for this Disney kid, perhaps my favorite moment of the evening came after the performance was over. As the audience exited and the orchestra played the last of the score, the audience yelled in unison, “Yes, indeed!”at the button of the closing song. Here’s the reference for those of you over 40 and under 25. It was a wonderfully satisfying way to end this community experience.