“A Unicorn without Its Horn” 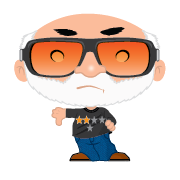 I was 18 and very naïve when I auditioned, unsuccessfully, for my first college production. It was The Glass Menagerie, Tennessee Williams’s 1943 classic, now being revived, disappointingly, at the Wild Project under the joint direction of the ubiquitous Austin Pendleton and the less well-known Peter Bloch. Not long after, I did the Gentleman Caller scene for a student director in his directing class but I was far too green to get a handle on this seemingly simple but actually quite difficult role. Over the years, I’d learn more and more about the play and its characters by visiting numerous productions, amateur and professional, stage and screen. 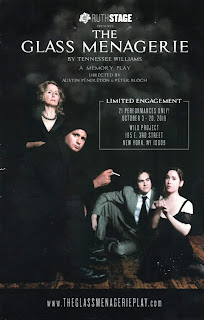 Its lyrical yet wrenchingly honest expression of a family’s emotional struggles in Depression-era St. Louis continues to inspire one production after the other. Recently, in 2013 and 2017, respectively, there were two Broadway revivals, each with a major star, Cherry Jones and Sally Field, playing Amanda Wingfield. Ever since being given an historically memorable performance by Laurette Taylor in the play’s first production, Amanda has become a touchstone for leading actresses of a certain age.
Amanda is the aging Southern belle fallen on hard times who lives in a shabby apartment across from the Paradise Dance Hall, quarreling with her contentious son, Tom, a shoe factory worker who dreams of being a writer. She also romanticizes her painfully shy daughter, Laura, suffering from a mild physical disability that she has magnified to the point of crippling her psychologically. Amanda’s penchant for escaping the dross of these dusty circumstances—she sells magazine subscriptions over the phone—by covering them in the haze of romantic illusions has never lost its power to touch us.

However, the frequency of Glass Menagerie productions has led each new one to seek something special or unique to make it stand out from the rest. Sometimes, the choices are notoriously odd. Who, for example, if they saw it, can forget the nearly scenery-less Cherry Jones revival in which Laura made her entrance by emerging from the cushions of a couch?

The Pendleton-Bloch version, however, neither includes a famous actress nor does much that could be considered particularly unconventional. The lack of the former, in fact, could be considered a plus as it puts the focus back on the character and not the performer, if that’s even possible with such an iconic role. On the other hand, the production's announced intention to offer a "chilling" interpretation to match the Halloween season seems to have been abandoned from the get-go.

The Glass Menagerie opens with Tom (Matt De Rogatis) breaking the fourth wall to deliver a poetic prologue, reminding us of the social background by reciting events from the 1930s, telling us that this is a memory play, and noting the unrealistic nature of what we’re about to see. He even explains that the only realistic character is the Gentleman Caller (Spencer Scott).
Jessie Bonaventure’s minimalist set on a tiny, black stage has no walls and uses only furniture; an alley stairway is indicated by a small, metal, ladder unit. Staring down on the action is a large projection of a young man's smiling face, intended to represent the photo Williams calls for of the Wingfield paterfamilias, a telephone lineman who abandoned the family because "he fell in love with long distances."

The play is acted at a sloth’s pace in a dimly lit (by Steve Wolf), dully realistic way, with very little of the poetically magical qualities we expect from this play about emotional memory. Each cast member displays respectable acting chops that might have flourished in a more imaginative staging, but the intermissionless (not a wise choice), two-hour production is so grounded in standard realism that the play seems more like William Inge than Tennessee Williams.

In a minor concession to theatrical stylization, most props are abandoned in favor of mime, a convention used both inconsistently and distractingly. Cigarettes and newspapers are imaginary, for example, but other props, like a floral bouquet or candelabra, are not. Similarly, both Tom and Amanda use Southern accents, albeit different ones, while neither Laura (Alexandra Rose) nor the Gentleman Caller do, or at least not in a clearly discernible way. Tom's, by the way, makes him sound like a rural rube, the kind that says "sichiyachun" for "situation."

Ginger Grace, an actress new to me, plays Amanda with intelligence and, like her name, grace, but her performance is so rooted in naturalistic, everyday behavior that she fails to capture the larger-than-life qualities with which Williams has imbued this flighty, loquacious, self-dramatizing creature. She makes a strong impact late in the play when she erupts angrily toward Tom, but too much else fails to go beyond the ordinary. She may insist on Laura’s need for “charm” and “vivacity,” but she barely manages to embody those qualities herself.

Matt De Rogatis is a suitable Tom, bringing passionate frustration to his encounters with his nagging mother, but he, too, can’t shake the production’s air of gloomy desperation. A side effect is the notable lack of the laughter so obvious in the best revivals. In the closing moments, De Rogatis benefits from the production’s finally incorporating, through lights and music (by Sean Hagerty), some of the theatrical touches so sorely lacking until then. We see this in Tom’s famous, final speech (“Blow out your candles, Laura—and so good-bye”), delivered in an expressive, rhythmic way. Odd as it is, it at least nods toward a sense of poetic performance even though it’s too little too late.
Alexandra Rose’s Laura, played with a barely perceptible limp, is closest to Williams’s intentions. She’s about as honestly shy and withdrawn as you could wish. The problem, though, is that her lowkey presence is not that distant from the underplaying of her colleagues, seriously dampening the necessary contrast. This is particularly noticeable in the usually magnificent scene when Laura and Jim, the Gentleman Caller, are left alone. Spencer Scott’s perfectly nice Gentleman Caller is, on one level, quite believable, but he’s so restrained, quiet, and polite that he lacks even a shadow of the BMOC personality we’ve been told made him so popular in high school. As a result, the scene, which should be hypnotizing, is instead somnambulent.

Like the symbolic figurines that give the play its title, The Glass Menagerie is a delicate work of art requiring extreme sensitivity in its handling. Lacking that, as in this earnest but flawed revival, it’s much like Laura’s glass unicorn when its horn breaks off, robbing it of its magic.