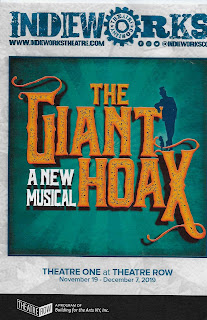 Indieworks invites families to step right up and learn about a fun piece of New York history with The Giant Hoax, a new musical by Kit Goldstein Grant. Marking the 150th anniversary of “the biggest hoax in history,” the production riffs on the true story of the Cardiff Giant, a fabricated 10-foot sculpture passed off in 1869 as a real-deal, petrified, prehistoric corpse of a giant. Crowds lined up to pay 50 cents for a glimpse. (If that sounds far-fetched, the business of catering to gullible chumps is alive and thriving at Ripley’s Believe It Or Not, right down the street from The Giant Hoax.)

Grant’s account of the infamous hoax is told from the perspective of headstrong, but naïve, 10-year-old Emily (young adult Staci Stout). Outfitted in a blue checkered dress, she's a farm-girl who believes in fairies and mermaids and giants (oh my). Tired of being scolded for telling tall tales, she runs away from home to see the Cardiff Giant. Short on pennies, Emily becomes an apprentice as a barker to William “Stub” Newall (Forest VanDyke), the shady showman with whom the girl forms an unlikely bond. Stub had the Cardiff Giant manufactured to make a profit off an easily duped audience, but VanDyke instills in him a sincere likability that might make you want to get in line with your half-dollar, too.
There is one place where the Cardiff Giant is very much real, and that’s in Emily’s imagination. The giant comes to life as her imaginary friend in the form of a huge (well, giant) puppet voiced by the tall (if not quite 10-feet tall) Daniel Moser, who manipulates the puppet along with Jianiz Colon-Soto and Mary Albert, who control the ample hands. As they play cards and sing, Emily becomes absorbed in her larger-than-life friend.


Star-to-be Staci Stout effortlessly switches gears between the Annie Oakley-like farm girl, literally standing on a soap box with gusto, and the scared kid quietly lost in her imagination, with a vocal range that charms and impresses.

When the famed circus impresario P.T. Barnum (a cartoonish Paul Aguirre) hears of the buzz garnered by the Cardiff Giant’s success, he tries to buy it from Stub. Irked that Stub refuses to sell him the attraction, Barnum manufactures a Cardiff Giant of his own, publicly proclaiming his is the real deal and Stub’s is a fake. When a trial ensures to prove the validity of the giant monuments, both showmen are forced to confess they produced the giant, and Emily must come to terms with reality.

In the happy ending you would expect, Emily returns home to her mother with renewed zest about the world holding “wonderful things.” As for Stub, it turns out the crowd will now pony up a full dollar (double the original price) to see the Cardiff Giant (the namesake of a Brooklyn pub a century and a half later), because checking out the source of a scandal is even cooler than an actual petrified giant.
Director Christopher Michaels makes solid use of the ensemble, most of whom play multiple characters and rotate on and off to produce the effect of larger crowds. Tyler Carlton Williams’s costumes and Theron Wineinger’s sets place the show appropriately in 1869 upstate New York.

Kit Goldstein Grant delivers an effective score with a few leave-the-theatre hummers and fun, playful lyrics. But despite some catchy tunes, the already-short, 90-minute family production lags and feels caught in an identity dilemma: perhaps too slow and complex for children but not savvy enough for adults.