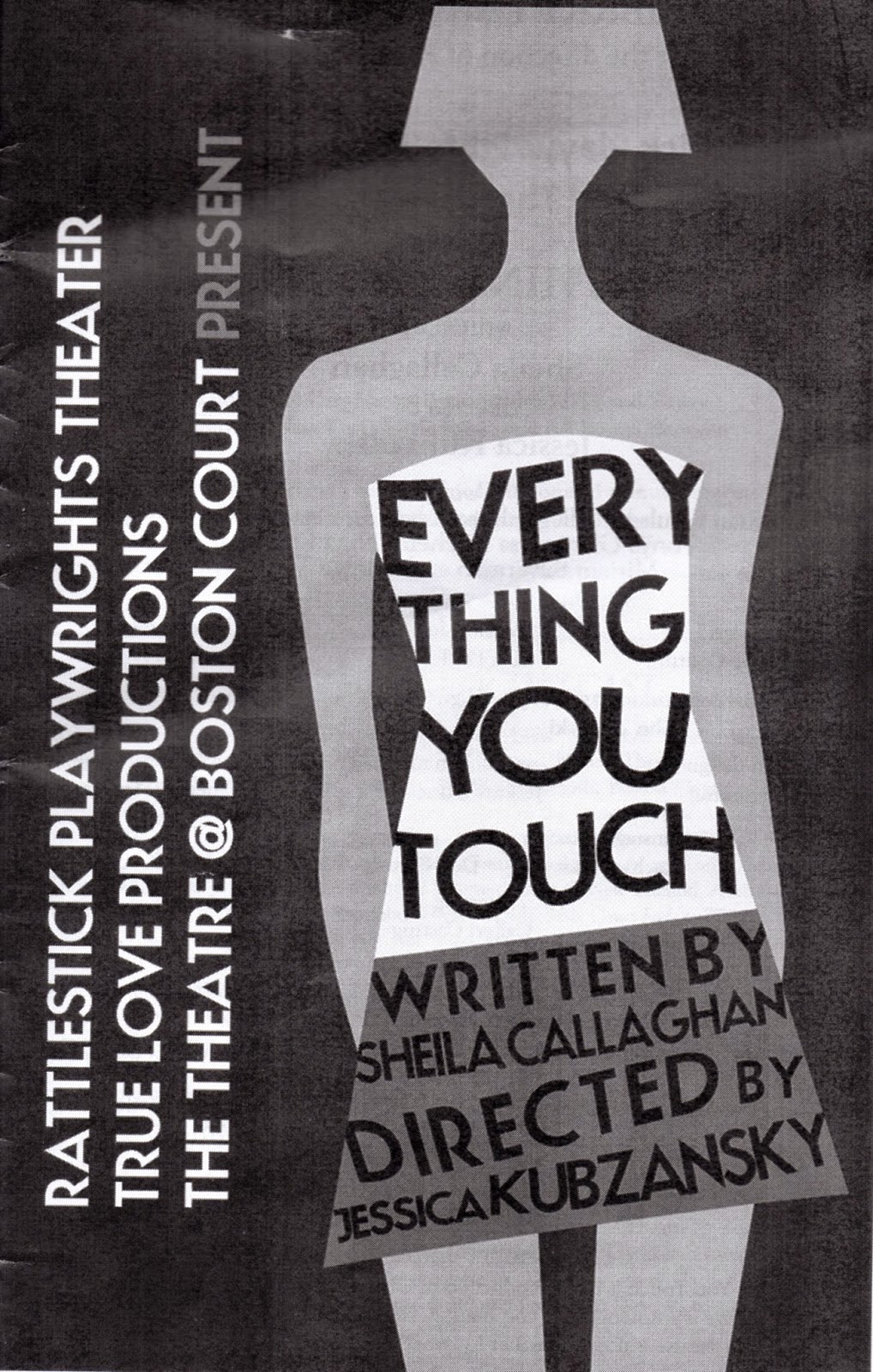 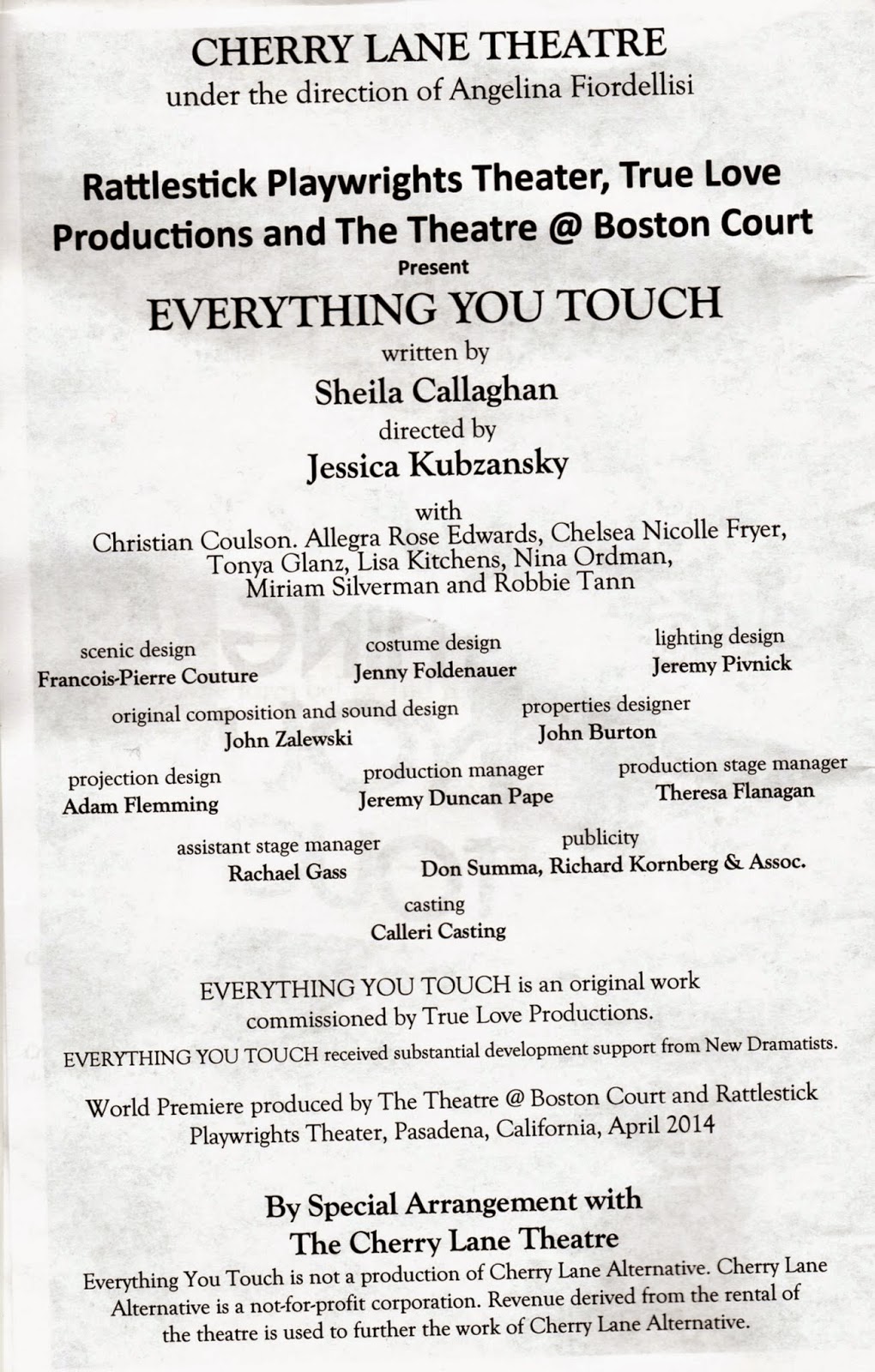 Like a good soldier, a reviewer must stick by his post to the bitter end. Civilians, however, can make a dash at intermission, as did a number attending EVERYTHING YOU TOUCH, Sheila Callaghan’s new dramedy at the Cherry Lane in a co-production of the Rattlestick Playwrights Theater, True Love Productions, and The Theatre@Boston Court. (Its premiere was in Pasadena last April.) Unlike my companion, who was generally positive about the work, I sympathized with the early departures from this kinky play about the fashion business.
EVERYTHING YOU TOUCH features two plot lines or, perhaps, a single plot running on two separate chronological tracks that converge in the second act. One thread transpires mainly in 1974, the other today. Because the staging (by Jessica Kubzansky) and writing don’t always make clear the jumps back and forth in time, and because an abundance of distracting theatricalist tics often get in the way, it may not always be easy to see clearly how the storyline develops or what it all adds up to.
In 1974 Victor Cavanaugh (Christian Coulson, of HARRY POTTER) is a pencil-thin, passionate, chain-smoking, British-accented, flamboyantly dressed, New York fashion designer with his own clothing line/store; this narcissist so ruthlessly demeans one of his models for not living up to his cutting-edge vision that she kills herself. Suicide, he cynically declares in an effort to avoid the guilt, “is the most BANAL choice a human can make,” a comment that will come back to haunt him.

Flash forward to today: Jess (Miriam Silverman) is a sloppy, self-hating mess of a 40ish woman, an overweight, seriously unkempt, and catastrophically unstylish New York worker at an “upstart doctom.” She’s just learned that her mother, who’s been living in Little Rock, and whom she hasn't seen in a decade, is dying; leaving behind Lewis (Robbie Tan), the coworker who loves her, she sets off to visit Mom before she passes.
Victor’s muse and lover is the attractive Esme (Tonya Glanz); she has designer aspirations of her own, beginning with a line inspired by the Vietnam War. A rivalry for Victor’s attention shows up in the shape of Louella (Lisa Kitchens), a young woman from Little Rock who’s won a radio contest and has come to Victor’s for a VIP makeover. Before long, she displaces the jealous Esme, who, pregnant by Victor, leaves to settle in Little Rock.
Jess—a potentially suicidal victim of self-inflicted man-issues—conjures up a vision of a guy to accompany her to Arkansas. Among the traits Jess wants in this man is for him to look like her father, who died when she was two, and whom she hopes will transform her into the beautiful woman she believes she must be before her fashion-conscious mother can really see her. This dream man—apparently real in every way, including sexually—is Victor, exactly as we’ve seen him four decades earlier, although he says he’s a gypsy cab driver. Things get increasingly tricky from here on, but the loose ends do eventually get tied up (see above for clues). If this kind of loopy“magic realism” or whatever you want to call it appeals to you, you can find it at the Cherry Lane.
Although some scenes have straightforwardly realistic narratives, the play is lacquered over with the kind of “experimental” devices that have become a stock in trade of many unconventional playwrights, including, “inner monologues” in which characters describe what they’re thinking or doing (happily, Ms. Cavanaugh self-referentially comments on this at one point). The dialogue veers sharply from heightened poetic language to conversational prose, although it often crackles with smarmy wit (“Your dick is like a failed hard drive”). Some of the richly salty invective directed at fat female butts is worth preserving, but I found the play’s most notable takeaways to be visual, not verbal.
Francois-Pierre Couture (could there be a better name for a play about fashion?) has created a neutral-colored box set with entrances down left and right, and one up center that opens and closes like a guillotine blade. As lit by Jeremy Pivnick the walls are either opaque, transparent, or translucent, and serve as a background for Adam Flemming’s numerous projections. Segments of the walls are like windows for the display of various props.

Given the episodic plot's time-spanning nature, Couture’s unit set is not especially unusual; the most distinctive design feature is Jenny Foldenauer’s witty costumes, especially those that mimic and satirize the over-the-top excesses of high couture runway shows (the best scenes in the production). The women’s clothes work best, but those worn by Victor, supposedly a sine qua non of sartorial splendor, most often resemble the tastelessly garish cast-offs of a glam-rock British boy band. He never looks better than when he appears toward the end in a simple black sweater and stone-washed jeans.
The costumes are an intrinsic part of this fashion-crazed world, which the play fitfully satirizes, but what most incessantly distracts your eye from the dramatic developments is the use of three long-limbed actresses (Allegra Rose Edwards, Chelsea Nicolle Fryer, and Nina Ordman) playing both the models who parade on Victor’s runway and—prepare yourselves—much of the furniture; they also sometimes serve as a chorus for spoken passages. When they’re not on the runway, the models, clomping about in high-heeled platform shoes, wear appropriately skin-toned, skintight body suits (one of them brown) that suggest the nudity of department store mannequins. Positioned by director Kubzansky, the models—as a comment on the objectification of the female form—become chairs, tables, and even a car, with appropriate accessories attached to their heads or bodies: backs with steering wheels, heads encased in gumball machines or topped by phones, a bucket of Chinese takeout, etc. They also move what nonhuman props there are off and on: several seem to be assembled from the body parts of discarded mannequins.
Although the leads are played by talented actors, they’re only occasionally able to meet the play’s demanding requirements. Ms. Silverman, so outstanding in EST's FINKS two seasons ago, attacks her role with her usual intelligence, but has too much gravitas for a role needing the eccentricity of a Lena Dunham. Ms. Glanz, mainly in her earlier scenes, provides the right electric presence, while Mr. Coulson’s nervous behavior, which has him constantly, smoking, pacing and lying about on a table, eventually grows annoying. Distracting as they are, I preferred watching the models.