"East Meets West, or Tries To" 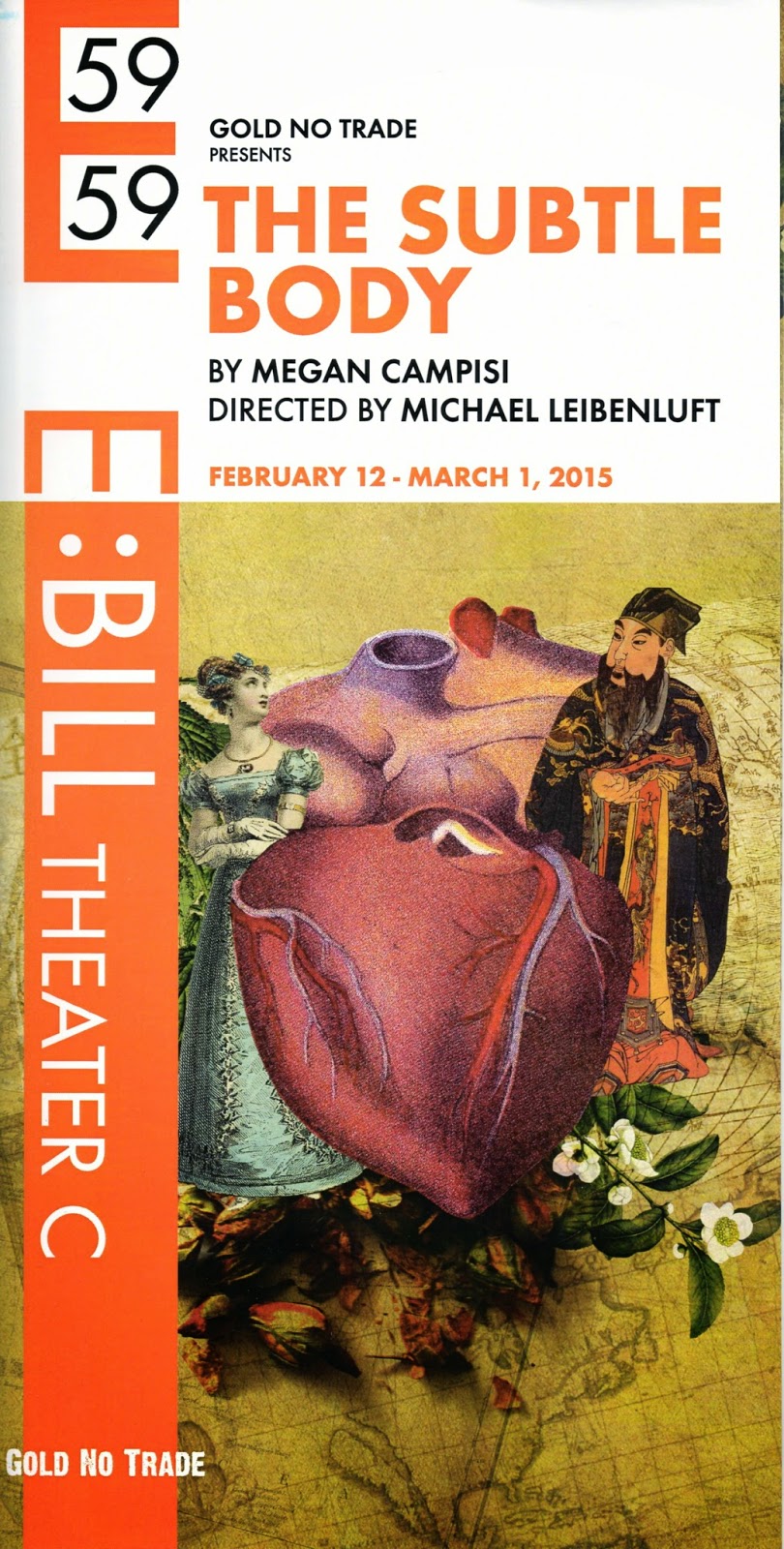 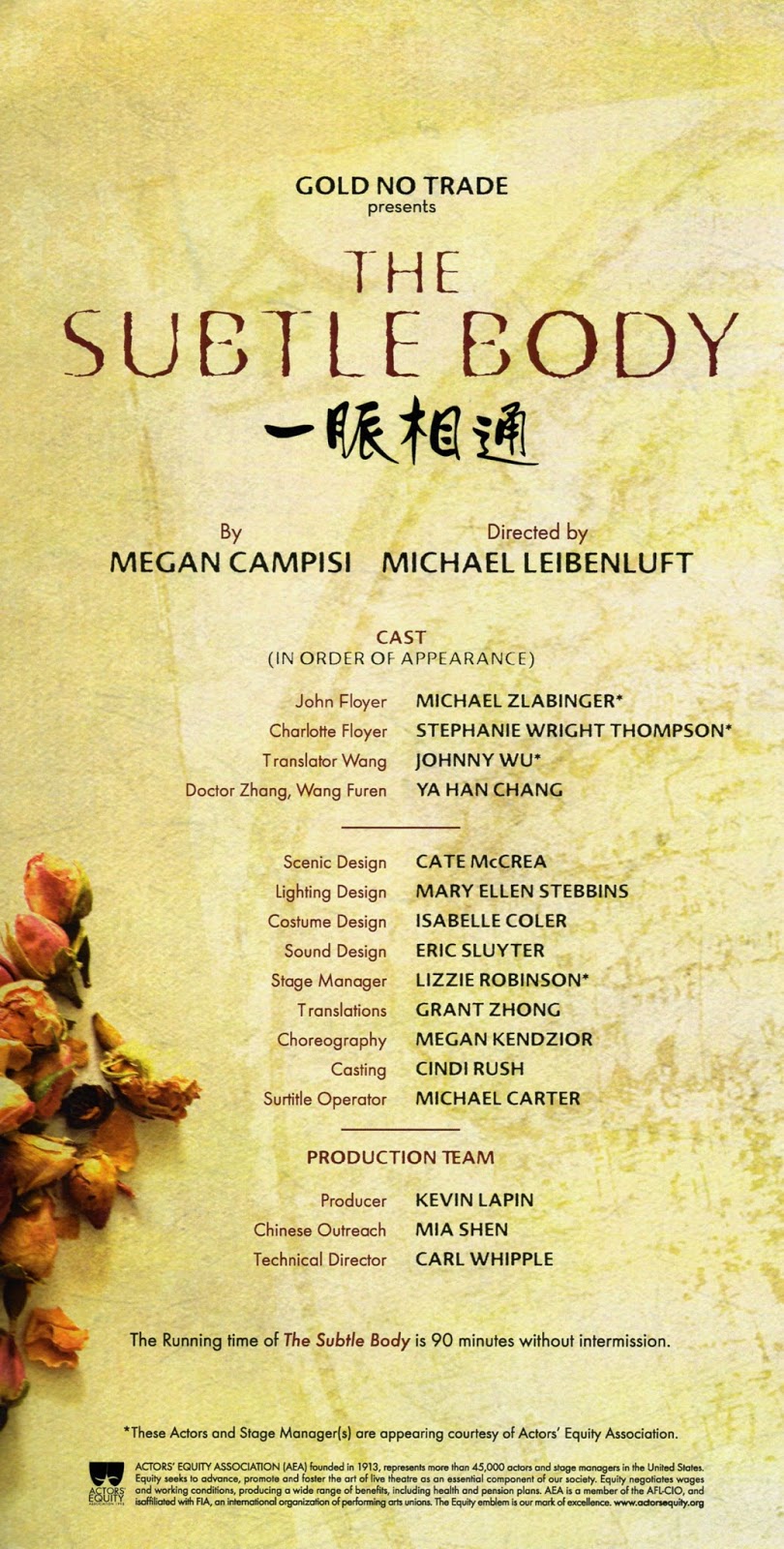 In THE SUBTLE BODY, Megan Campisi’s subtly engaging, but only fitfully funny, historical comedy about cultural misunderstanding, John Floyer (Michael Zlabinger) is an offbeat British physician who, with his wife and personal secretary, Charlotte (Stephanie Wright Thompson), travels to China in 1702. His goal is to learn the secrets of Chinese medicine in the hopes of writing a book that will revolutionize Western medical practice in the manner of William Harvey, his idol. Unable to make any progress, he arranges to meet Doctor Zhang (Ya Han Chang), a wise, bearded practitioner of traditional Chinese medicine, sharing with him tidbits of knowledge about Western medicine in exchange for insights into Chinese methods. Serving as intermediary in these efforts is Translator Wang (Johnny Wu), a handsome young man whose impeccable, British-accented English is the result of his having been educated by missionaries. Charlotte is present at the meetings to write down what transpires, and she and Wang soon find themselves attracted to one another.
Floyer, a parody of stuffy, narrow-minded, Eurocentric pomposity, offers useless examples of Western medical insights from Aristotle and others that Doctor Zhang finds typically barbaric and unenlightened. On the other hand, when Zhang—master of a 4,000-year old tradition—makes accurate diagnoses of Floyer and Charlotte’s physical conditions via their pulse beats, the British doctor—himself a renowned pulse expert—is astonished. (He scores one of the play’s best lines when he reveals his obstinate inability to accept the advantages of what he’s learning: “It might work in practice, but doesn’t work in theory.”)
However, Floyer’s inability to comprehend Zhang’s metaphoric reference to an intangible essence in the pulse called the “mo” baffles him, and he demands a more concrete explanation, although he finally has his eureka moment when he’s able to relate it to something in his own experience. Zhang, for his part, grows impatient with Floyer’s impractical information. Meanwhile, Charlotte decides to leave him and marry Wang, albeit in the position of second wife to first wife Wang Furen (Ms. Chang, again). Unlike what you might expect if you’ve seen the 1991 Chinese move, RAISE THE RED LANTERN, the arrangement proves quite compatible.
Campisi may write with her tongue planted in her cheek, a tone supplemented by the light comedy manner of the production, but she makes no attempt to suggest that the foundation of her play—John and Charlotte’s research journey to China—is pure fiction. There was, indeed, a Dr. John Floyer (1649-1734), who made his mark by, among other significant breakthroughs, introducing the practice of pulse measurement, for which he created a special watch; the watch, in fact, has a part in Campisi’s play and is even mentioned in a projection at the conclusion. His wife, though, was named Mary, not Charlotte, which only heightens Campisi’s playful, if misleading, attitude toward history. Floyer, also noted as an advocate of cold bathing (which features in one scene), had wide-ranging scientific interests, among them Chinese medicine. He never made a trip to China, however, which would have been a momentous journey at the time. Nor was he anything like the bumptious Floyer in the play. And the idea of an upper-class British woman divorcing her husband and becoming a Chinese translator’s second wife . . . ? You HAVE to be kidding.

[After posting this I found a respected reviewer's coverage of the play, in which he writes, after mentioning Floyer: "A true man of the Englightenment, he traveled to China in 1702, hoping to trade his Western scientific knowledge for an awareness of Asian healing wisdom. Among other things, he returned with an understanding of how to measure a patient's pulse rate, by calculating it over the course of a minute with the aid of a watch. If you believe Megan Campisi's play . . . Floyer lost his wife, Charlotte, in the process." If even reputable critics take such misinformation at face value and repeat it, one realizes how dangerous a game writers like Campisi play when they don't bother to acknowledge their distortion of the facts.]
While the play—which combines conventional dialogue with narrative monologues—isn’t meant to be taken seriously as the depiction of an historical episode, it does score several amusing points in its demonstration of cultural confusion, even on so basic a level as when Floyer meets Zhang and offers his hand to shake while Zhang, for his part, is in the process of bowing. (I know, it’s been done before.) My guest at the play, who makes his living as a consultant to Japanese businessmen going to work for American companies and Americans going to work for the Japanese, appreciated the way the play captured such moments, which are as common in intercultural relationships today as they ever were.
THE SUBTLE BODY, a production of the Brooklyn-based Gold No Trade company, is competently directed by Michael Liebenluft, and reportedly played to sold-out houses in Shanghai. It is performed in both Mandarin and English, the Mandarin either being translated simultaneously by Translator Wang or projected on a screen above the stage. All of the English is subtitled in Mandarin. (As too common with such theatre subtitles the ambient lighting tends to wash them out and make them hard to read.) Grant Zhong did the actual translations.

Cate McCrea’s unit set, a simple structure of bamboo poles nicely lit by Mary Ellen Stebbins, fits into one corner of the tiny Theater C black box at 59E59 Theaters, with the audience facing it along two walls. The period costumes designed by Isabelle Coler are simplified versions of early 18th-century British and Chinese clothing, most of them combining an attractive combination of off-white/beige with touches of powder blue. An appealing percussive sound design by Eric Sluyter keeps the scene transitions lively. This being a romantic fantasy, both Charlotte and John are much younger and more attractive than their historical counterparts. The acting standout is Ms. Chang, who speaks only in Mandarin, but who demonstrates considerable versatility in bringing wily wisdom to the male role of Doctor Zhang and wifely authority to the female role of the first wife.

THE SUBTLE BODY offers some fundamental comments on the differences between Chinese and Western medicine, at least as these existed over 300 years ago, and one of the performances will even be followed by a panel discussion involving medical specialists, but medicine is merely the fulcrum for a play concerned with how peoples of dissimilar cultures negotiate their differences. Despite being so preoccupied with human pulse rates, it never quite managed to make mine race.