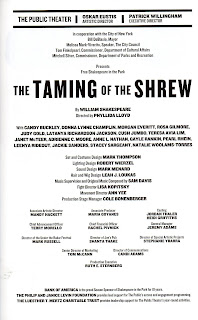 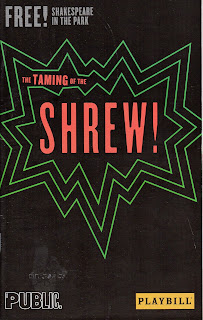 Whenever I see a production of Shakespeare’s The Taming of the Shrew I can’t help but remember the time I played Petruchio in the wooing scene (“Good morrow, Kate, for that’s your name, I hear”) on the vast stage of Loew’s Pitkin Theatre in Brownsville, Brooklyn. The time was June 1955 and the occasion the commencement exercises for Somers JHS 252. My teenage Katherina was Myra Schneider, a red-hot blonde; there was no way for me to tame this shrewish little spitfire, either off or on the stage (I never saw her again after we graduated), but watching various Petruchios through the years I learned a lot about how I might have been much better in our scene.
Of course, I never expected for one of my mentors to be a woman. That’s what happened, though, when I saw British star Janet McTeer, tall, lanky, and loaded with bad-boy bluster (and an American accent), play the part in the otherwise bumpy, all-female revival of Shrew directed by Britain’s Phyllida Lloyd that begins this year’s season of Shakespeare in the Park.

Like The Merchant of Venice, The Taming of the Shrew has run smack dab into modern attitudes that make productions of it problematic and require directors to find creative ways to avoid offending audiences. Various productions have managed to avoid the anti-Semitic overtones of Merchant but it’s not quite so easy to abandon Shrew’s insistence that women should be kept in their place and that men rule the roost.
Shrew is a play in which Petruchio, a testosterone-fueled chauvinist from Verona, comes to Padua to “wive it wealthily,” i.e., to marry someone for money, and succeeds through rather forcible means in taming and making malleable the defiantly shrewish Katherina (Cush Jumbo). She (a.k.a. Kate) is the daughter of the wealthy Baptista (LaTanya Richardson Jackson), and sister of the complacent Bianca (Gayle Rankin), played here as a ditzy Southern belle in a Dolly Parton wig. Petruchio will stop at nothing to tame the termagant, even to the point of sleep deprivation and starvation, and the play concludes with Kate conceding victory in no uncertain terms, including these closing words:

Then vail your stomachs, for it is no boot,
And place your hands below your husband’s foot:
In token of which duty, if he please,
My hand is ready; may it do him ease.

My 24-year-old granddaughter, who’d never seen the play before, said it gave her the chills to hear this submissive speech, but, like it or not, that’s what Shakespeare wrote. Modern actors and directors have tried numerous ways to undercut it with ironic looks and business; when it works, it reveals Kate’s subtle intelligence and how well-matched she and Petruchio actually are. The solution offered by Lloyd and Cush is for Kate to speak the words forthrightly and then to add newly written ones that spit out her dismissal of them. This does nothing but subvert and literally rewrite the play.
This is only one instance of such reductionism. Instead of the Christopher Sly induction scene framing the play (which has been ruthlessly cut to an intermissionless two hours), Lloyd begins and ends it with a beauty pageant (“Miss Lombardy 2016”) commented on over the PA system with Trump-like voice and platitudes, while, later in the play, Gremio (Judy Gold) does a bit that alludes to Hillary Clinton and expresses Gremio’s distaste for being directed by a woman. Among other such piled-on shtick is a passage that quotes from Gone with the Wind, with Bianca as Scarlett O’Hara in a Civil War hoopskirt. Is this Shakespeare-right, Shakespeare-lite, or Shakespeare-flight?
As expected, there’s a lot of farcical folderol, with lots of characters in disguise, and plenty of physical action (such as Kate racing about on a bike) and an eclectic musical background (sound design by Mark Menard), including Presley, Benatar, and a full-company finale dance to Joan Jett’s “Bad Reputation”; sorry, but very little is more than passingly funny. Some of the biggest laughs the night I attended came when a gaze of raccoons kept moving across a gap in the scenery.
Having only women play roles in a work focusing on male-female behavior helps underline issues of gender construction but it goes only so far; the point once made, you still have to get through the rest of the play watching largely height-challenged actors with their breasts taped down trying to convince you of their masculinity. Yes, Shakespeare’s actors were all male, but the female roles were played by young specialists and there were only a handful of them on stage in any case. The all-female approach worked much better in Lloyd’s Julius Caesar at St. Ann’s Warehouse, where it made sense in the prison environment created for the production. 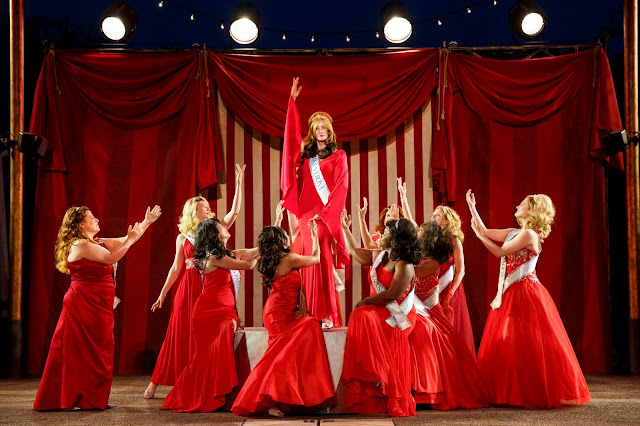 For some vague reason, Shrew is set in a circus environment, as if the world were itself a circus (albeit one without any circus acts). Mark Thompson has created a tent-pole setting on a large ring-like platform, with sizable caravans at either side; there’s also a substantial RV for Petruchio, moved on a turntable, with cheesecake pictures on it and a PISA-ASS license plate. His costumes are a miscellaneous mix of 20th-century garb, with suits, derbies, and fedoras for most of the men; a scuzzy country singer’s dark jeans, jacket, and cowboy hat for Petruchio, and an abbreviated, pink and white, gingham dress for Kate. Very little ties these costumes together.

The company is certainly a talented one but, apart from McTeer’s show-stealing, super-macho, bully-boy, but oddly charmless Petruchio (who pees against a pole at one point), few others make much of an impression. Jumbo has done much better work (her solo turn as Josephine Baker in Josephine and I was superb) but here she’s been directed to act devilish by screaming, shouting, and jumping about, making her more a petulant child than a serious challenge for Petruchio to overcome.

Funny, you might say, but she doesn’t act shrewish at all. Myra Schneider, on the other hand, was both shrewish and . . .

The Taming of the Shrew
Delacorte Theatre
Central Park at W. 81st Street, NYC
Through June 26