"Depends on What You Mean by Funny" 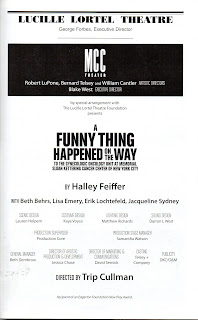 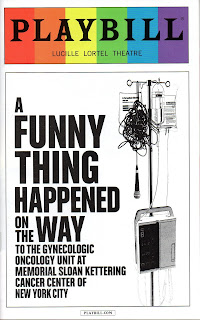 A funny thing may have happened on its way to the destination cited in the ponderous title of Halley Feiffer’s new play being given an MCC Theater production at the Lucille Lortel but it certainly doesn’t happen in the play itself. Feiffer, the talented writer of How to Make Friends and then Kill Them and I’m Gonna Pray for You So Hard, strains mightily to create an offbeat rom-com about a mismatched pair of losers who meet cute in a hospital room where their mothers are being treated for ovarian cancer; it’s a heavy lift.


Feiffer’s black comedy, which tries to wring smiles out of the dire misfortune of a loved one’s suffering by laughing in the face of death, has noble intentions. The characters she creates to navigate the situation, however, are neither interesting nor amusing enough to warrant the kind of empathy needed to appreciate watching them work out their issues for the play’s 85 intermissionless minutes. As my plus-one and I waited for a light at Sheridan Square, another theatregoer, who overheard us talking about it, said: “Those were the longest 85 minutes I’ve ever spent.”

Karla (Beth Behrs of 2 Broke Girls, making her Off-Broadway debut) is a young, standup comedian who works out loud on her new routine while visiting her mother, Marcie (Lisa Emery), a social worker. Also making daily visits to his mom, Geena (Jacqueline Sydney), is Don (Erik Lochtefeld), a man about twice Karla’s age, who made a fortune by selling his tech-start up (a wedding planner website). Karla’s lost a sister to drugs; Don’s wife left him for another woman and his son’s using drugs. Their mothers, Karla’s usually sleeping, Don’s seemingly comatose, share a room at Sloan Kettering, a curtain separating one bed from the other. Don’s mom has only a few words, but Karla’s has the same kind of love/hate attitude toward her daughter Feiffer (daughter of cartoonist/playwright Jules) dramatized between a father and his daughter in I’m Going to Pray for You So Hard.

As exaggeratedly costumed by Kaye Voyce, Karla dresses in an attempt at downtown comic coolness, wearing brightly colored ski caps and jeans with one leg rolled up to her knees. Don, for all his wealth, has been struggling with his mother’s illness for years, thus justifying his homeless person look, with dirty sneakers, holes at his elbows, and either cruddy sweatpants or chinos with a hanging butt. When Don can’t help but be annoyed by overhearing Karla’s filthy bit about being raped by her vibrator, he objects, the curtain gets moved aside, and one thing leads to another as anger turns to mutual interest, interest turns to attraction, attraction turns to sex (barely seen through the open bathroom door for those on the right of the house); the rest, none of it particularly surprising or original, can be left to your imagination.
Despite the very specific location of a hospital room (precisely designed by Lauren Helpern and lit by Matthew Richards) in an oncology unit whose name is part of the play’s title, and the presence of two women ill with cancer, the play spends little time on medical issues. Geena’s terminal but Marcie, who’s had a hysterectomy as a defense against Stage 1 endometrial cancer, has a shot at survival. Meanwhile, the actresses must simulate sleep or sedated semi-consciousness for much of the time they’re on stage, not an easy task when you have cues coming up. Despite having barely any words, Sydney brings her character to life by sustaining an expression of pain throughout; it’s never quite clear just how much she hears of what’s going on. And Emery, during her waking moments, makes a cutting impression as a sarcastic woman who can say to a total stranger offering to help her with her nasal tube, “What’re you gonna do, enlarge my nostrils with your dick?”

Under Trip Cullman’s overstated direction, both Behrs, a slender blond, and Lochtefeld, tall, lanky, bearded, and bespectacled, overplay from the get-go, pushing their annoying eccentricities for maximum effect and thereby abandoning their believability and charm. Each has occasional moments of honesty and sincerity but these are too infrequent to overcome the general air of artificiality and lack of humor they provide.

A Funny Thing . . . does now and then stimulate laughter; it just depends on what you think is funny.