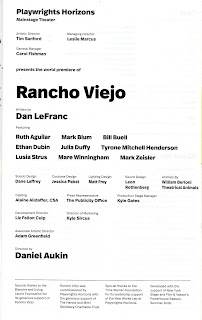 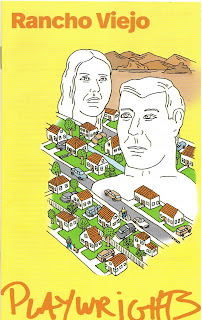 Rancho Viejo, the title of Dan LeFranc’s well-acted but otherwise troubled domestic comedy at Playwrights Horizons, refers to a typically faceless community in the suburban  sprawl of Southern California, apparently close to both desert cacti and roaring surf. The houses are more or less copies of one another, and the people in them, for all their superficial differences, are pretty much cut from the same stock.

Rancho Viejo is a needlessly long play, three hours to be exact, played out over three acts with two intermissions that give bored, uninterested, or puzzled playgoers ample opportunity to leave. For the first two acts we’re in a pastel-painted living room, with bare walls, a huge sectional, and sliding doors leading to a sandstone patio. Dane Laffrey’s set and Matt Frey’s lighting perfectly capture this innocuous environment.
At first, it serves as the home of an insipid, childless, middle-aged couple, the nerdy Pete (Mark Blum, at the top of his game) and the plain-Jane Mary a.k.a. Mare (Mare Winningham, believably sincere); Winningham actually has a bit about why Mary hates being called Mare.

The set remains the same when the action shifts to the home of the snide, attractive Patti (the excellent Julia Duffy, with her electric shock of great white hair) and her dude-this-and-dude-that, ex-surfer spouse, Gary (Mike Zeisler, stoner cool). It then becomes the home of another couple—go-to tech guy Leon (Tyrone Mitchell Henderson, nicely laid back), the only black character, and his live-in companion, the foxy Suzanne (Lusia Strus, with a voice that could cut diamonds). Suzanne's suffering from a “hole” in her eye that becomes a running joke. Jessica Pabst’s casual couture captures each of these people with spot-on accuracy.
It’s all mildly reminiscent of an Alan Ayckbourn play, emphasizing the uniformity of taste among the homogenized folks of Rancho Viejo; on the other hand, you can be forgiven for not always being sure whose house you’re in. LeFranc extracts some irony from this when someone says, “Hey, what do you think of their house?” or “Do you love it? Do you wish you lived here?”
Also involved are Mike (Bill Buell), forever stuffing snacks into a Ziploc bag, and his Guatamalan wife, Anita (Ruth Aguilar), who speaks only in rapid-fire Spanish (which takes up too much stage time) as her linguistically-challenged husband struggles to interpret. Then there’s an odd, android-like teenager, Tate (Ethan Dugar), friend to one of the couples, whose mysterious presence remains just that to the end. Finally, there’s Suzanne and Leon’s scene-stealing pooch, Mochi (Marti, trained by the great William Berloni), and the stuffed giraffe he chews on.
A couple of minutes into the play, Pete asks Mary, “Are you . . . Are you happy?,” which sets up the play’s flimsy philosophical creds as it examines the “why-are-we-here?” lives of its comfortably well-off couples. The men—professions unmentioned—are retired but Suzanne and Patti are real estate agents whose rivalry is a passing subtheme.
What plot there is emerges inch by inch from the characters’ get-togethers (what else is there to do in this suburban wasteland?) at one another’s homes as they get to know each other, although no one cares much about bringing the newly arrived Pete and Mary into the circle. It’s a stultifying place, where TV and a local art fair seem the limits of a cultural worldview, and where Mary’s idea of a must-see artist is a guy who paints whales.
Gary, who’s writing a book in which he conveys his ideas through food metaphors (“foods for thoughts,” he says), describes his feelings when reading his son’s “weird books”: “like you’re sitting out there in the water for hours with nothing happening. . . I mean nothing’s happening out there. . . for hours . . . but then if you’re patient suddenly it’s like the waves come rolling in one after the other just rolling in and rolling in and . . .”
Whether the big wave he’s alluding to is worth waiting for is something else. LeFranc’s central action circles around the irritatingly naïve Pete, who takes everyone’s problems too seriously, being so disturbed about the marital breakup of Gary and Patti’s son, Richie, that he can’t resist poking his nose into the affair, with comical results. Subplots, if you can call them that, include a phone that rings every morning from an unidentified caller, and the disappearance of Mochi into the night, where coyotes can be heard howling.

Acts One and Two are in conventional sitcom mode, garnering a fair quantity of laughter with the help of director Daniel Aukin’s nicely calibrated timing; many will expect more of the same in Act Three, perhaps further intensified by revelations stemming from the Richie and Mochi situations. Instead, the living room set is abandoned and a series of scenes, several bordering on the bizarre, appear against a black background used with variations for multiple new locations; the humor now leans increasingly toward absurdist situations and punchlines bordering on nonsequiturs.

There’s also a good deal of unnecessary, unfunny business (and a distracting, timewasting scene-change using multiple stagehands in hazmat-like black outfits) that could be easily chucked to send us home at a more reasonable time. In fact, the entire first third of Act Three could get lost and wouldn’t be missed as much as Mochi is.
Rancho Viejo occasionally attempts to introduce meaningful discourse into its dialogue, including references to the effect of art on people’s lives, and there are scattered bits of amusing banality that highlight LeFranc's take on the emptiness of his characters’ existence. These, though, mostly amount to window dressing on a play that takes a long time to say a lot about very little.