“Knock Him Your Lobes”

When I was in high school and college in the late 1950s and early 60s, listening to “adult” comedy records at parties was a popular way to rouse laughs while making out or getting high. Among those we enjoyed for their convention-busting humor—sometimes sexual, sometimes political, and always hilarious—were Shelly Berman, Nichols and May, Mort Sahl, Redd Foxx, and Lenny Bruce (when you could get a bootleg recording of one of his controversial gigs). 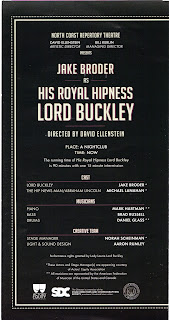 There was also the American comedian-musician Lord Buckley, a former lumberjack, who pretended to be an English aristocrat with an upper-crust accent mingled with the slurry speech of a black jazz musician. His words were an exaggerated hipster jive you might have heard from the Rat Pack on verbal steroids, where everyone was a cat or a daddy-o, you dug things, you did solids, you wailed, you grooved, you blew, you swung.
Lord Buckley (1906-1950), who died of a stroke after losing his cabaret card because of a much earlier marijuana conviction, has been brought back to life, more or less, in a 90-minute cabaret-type act, his persona assumed by actor-singer-musician Jake Broder, who has been doing variations of the work for over a decade, including a 2005 gig at 59E59, where he's presently holding court. Its current incarnation premiered at San Diego's North Coast Theatre.

Many great standup comics, writers, and musicians of the Beat Generation and later admitted that Buckley was an influence, among them George Carlin, Dizzy Gillespie, Bob Dylan, and Tom Waits, George Harrison, Ken Kesey, and Robin Williams.

Buckley had to have been one hip cat to turn these guys on but I myself never dug his stuff; too square, I guess. I went to His Royal Hipness hoping to get hip to his groove, but the show didn’t give me the solid I was hoping for. His material, at least as contemporized by Broder, is leaden, and the hipster lingo of half a century ago, with which the show’s obsessed, seems as dated as stereos and old LP comedy records.

His Royal Hipness is not all Lord Buckley’s domain. Backing Broder is a terrific three-piece band of drums (Daniel Glass), bass (Brad Russell), and piano (Mark Hartman), and they blow some really hot licks of familiar standbys. The music—referencing Gillespie, Thelonious Monk, John Coltrane, Louis Armstrong, Miles Davis, Charlie Parker, and the like—is the best part of the show, which also includes, as an emcee/sidekick, Michael Lanahan, tall, slim, bespectacled, crew cut, and very period in his “Mad Men” suit. He reads the barely amusing “Hip News” at various intersections, and ably sings along with Lord Buckley on several tunes, like a hopped-up “Sunny Side of the Street.”
As Lord Buckley, the hardworking Broder stands before a mic dressed in the white tie and tails sometimes affected by Buckley. He looks nothing like the original, carries a half-smoked joint in one hand, and doesn’t bother to sport Buckley's carefully waxed and pointed mustache or wear his familiar pith helmet. He narrates stories in what he calls “the semantic of the hip,” which allows him to tell familiar tales, like A Christmas Carol, by “Chazzy D,” or Robert Browning’s “The Pied Piper of Hamelin,” in jazzy jargon  (he famously calls Jesus “the Nazz”) so you can graduate Magna Cum Swingy from the University of Hip.

In one of his classic bits, he translates into hip “The Gettysburg Address,” as Lanahan, dressed in comical Lincoln top hat and beard, recites it. Beginning “Four big licks and seven licks ago,” it’s no longer very funny nor was it ever in the best of taste (if you’re really down with what the words say), even if Lincoln (“Lanky Linc”) was one of Buckley’s favorite cats. Another Buckley classic here is “The Hip Gahn,” about that “divine swinger,” Mahatma Gandhi. I'm afraid its swung its last swing.

As Broder/Buckley speaks, his narratives are constantly highlighted by music, moments which he accentuates with snapping fingers, sound effects, and body language. When he’s not speaking, he’s singing, often abandoning the lyrics for bebop or scat; he also displays proficiency on the sax and piano. His singing of “Georgia on My Mind,” in a tribute to Ray Charles, sharply turns the mood serious just before the intermission as he inserts dialogue about a Georgia lynching (it’s not, however, “The Black Cross” poem that, reportedly, deeply affected Bob Dylan).

Throughout the show, the most obvious target is that currently most obvious of targets, the president-elect, at least for a liberal audience; think Scrooge, for example, for an attack on parsimony; or the Mayor of Hamelin, who refuses to pay the piper for his work; or a Walt Whitman verse that goes, “I celebrate myself.” Buckley may be hip but he's not Bill Maher, Steven Colbert, Samantha Bee, Jon Stewart, or Seth Myers.

On the other hand, for all its Trump-bashing, the show trumpets a message of love, and Buckley even imagines himself being named Secretary of Love. And why not? It would make more sense than the Donald's other picks.