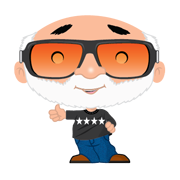 Confession: I have a middle-aged son who is such a comic book and action figure dork that you can’t move in his house without fear of knocking some musclebound superhero off his carefully positioned perch. So I was well prepared to sympathize with and appreciate the Batman obsession of Jason O’Connell revealed in his hilarious but also poignant one-man play, The Dork Knight. 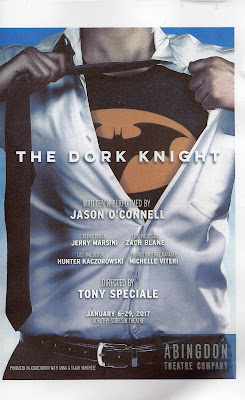 O’Connell, a Long Island-raised actor, who was outstanding as the Ferrars brothers in the recent Off-Broadway hit Sense and Sensibility, brings his endearing personality, abundantly versatile voice, and emotional depth to this autobiographical account of the role Batman—especially the movies—played in his life. Batman, after all, is a great superhero precisely because, lacking any superpowers, he’s willed himself to become what he is, making him an inspiration for countless insecure dorks the world over.

Standing within a black-painted space, bare except for a black arm chair and a small side table, he begins his tale with one of the deadliest spot-on impressions I’ve ever seen of Michael Keaton, star of the first two movies in the franchise, directed by Tim Burton. Puckering his lips, squinting his eyes, drying his lips with his tongue, speaking his words with dry, low-key naturalness, hunching his shoulders a bit, he lets you not only hear but see Keaton in the flesh.
O’Connell then moves on to reveal his reactions to each of the subsequent films. This allows him to insert impressions not only of the stars who played the caped crusader—from Keaton to Kilmer to Clooney to Bale to Affleck—but also to capture the vocal and facial mannerisms of several of Batman’s nemeses, like Jack Nicholson and Heath Ledger’s Jokers, Danny DeVito’s Penguin, Jim Carrey’s Riddler, Tom Hardy’s Bane, and Arnold Schwarzenegger’s Mr. Freeze. Even Anne Hathaway’s Cat and Morgan Freeman’s Alfred pay a visit. Admittedly, if you’re not a fanboy or fangirl, some of this may pass you by—especially one scene where too many voices pile on in sequence—but what remains should still hold you in its grip.
The premise, though, is not simply for O’Connell to comment on these characters and their interpreters, or to describe with comic gusto what an effort it was to capture the facial expressions of, let’s say, Jack Nicholson, but to explain how these movies and their themes, especially as expressed through Batman’s evolving ethos, influenced his own life as a struggling actor and romantic partner. Interestingly, O’Connell sometimes turns to Shakespeare (of which he’s done a substantial amount) to heighten his message.
His personal tale takes us to back to his childhood, growing up in a family where his dad left early and he was raised by his mom, grandmother, and, most lovingly, his grandfather; his father’s abortive attempt to reconnect with his abandoned children; his excitement when Keaton and Nicholson, his two favorite actors, were cast together in Tim Burton’s first Batman movie, which happened soon after he’d written about such dream casting in his high school newspaper; his growing fascination with the movies, each of which he’d see multiple times; a job as a locker-room attendant at a boy’s dance school; and how the wisdom he gleaned from Batman’s attitudes, especially as embodied in Christian Bales’s growly incarnation, taught him invaluable life lessons.

Smartly staged by Tony Speciale in the three-quarters round in the tiny Dorothy Strelsin Theatre, exceptionally well lit by Zach Blane, and supplemented by (uncredited) sound effects, The Dork Knight is a perfect vehicle for the personable O’Connell to demonstrate his considerable range as both a comic and serious actor.

I suspect my son, if he were to see this show, would agree that the impact of comic book heroes on his own life was probably just as deep.