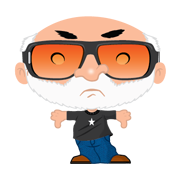 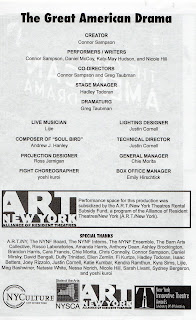 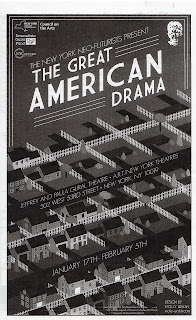 The Great American Drama is an “experimental” theatre piece by a group of (mostly) young artists calling itself the Neo-Futurists. In 2014 I saw something by them called The Complete and Condensed Stage Direction of Eugene O’Neill Vol. 2 that was one of more impressive experimental pieces for mainstream audiences around at the time.

In what was more a description than a review, I wrote:


I missed the first “volume” (2011) of this ongoing project, which is downtown at the Theater for a New City. Since what I viewed was an invited dress rehearsal all I’ll say is that this is a clever, one hour and 25-minute piece of devised theatre by a group called the Neo-Futurists in which four versatile actors, two men and two women, using a spare space with carefully chosen props, enact—in mime, apart from a few vocalizations—O’Neill’s extensive stage directions in five early one-acts from 1913-1915 (“RECKLESSNESS,” “WARNINGS,” “FOG,” “ABORTION,” and “THE SNIPER”), as they’re read into a microphone by a seated actor at a desk. The directions are so detailed one can figure out the plots even without dialogue; the results, as adapted and directed by Christopher Loar, are far more comic (intentionally) than the usually dour playwright intended.

I’m afraid the current Neo-Futurist project, now at the new A.R.T. Theatre, way over on W. 53rd near 10th, is anything but what its name suggests. For one thing, it’s not a play, per se, but an evening of devised theatre composed of bits and pieces shared among four actors. This diverse group (in terms of sexual orientation, race, age, and nationality) is joined now and then by Lijie, a sweet, young woman who entertains us with preshow music, accompanies some of the action, and once or twice joins the actors in their scenes. The others, in addition, to Sampson, are Daniel McKoy, Katy-May Hudson, and Nicole Hill. Greg Taubman codirected with Sampson.
The general approach is to address the audience directly, usually by the show’s redheaded creator, Connor Sampson, who explains the premise and asks us what will make the show a success. This allows attendees to help the company understand what the great American drama might be if they—the audience—were asked to provide the ingredients people want to see in such an opus. Those ingredients are present in the form of suggestions audience members provided online or offered in the lobby before the performance began. Previously selected ones are projected on the upstage wall while others are read from index cards.

Thus the evening is fluid, combining both rehearsed set pieces and improvised ones, with no two shows ever being the same. There’s a lot of Trump material, none of it positive, of course, which I appreciated hearing when I attended, on Inauguration Day. Unfortunately, the only thing enjoyable about the Trump-bashing was its existence; like almost every other attempt at humor in the piece, which also includes clown shtick and cardboard puppets (including a takeoff on a Trump-Clinton debate), the results are sophomoric, heavy-handed, and, too often, seriously unfunny.
Each of the performers is friendly, approachable, and personable. They may even have acting chops that would prove satisfactory in a more conventional theatrical framework. But they’re not especially strong as improvisers or satirists (regardless of what they’re satirizing), nor, as an extensive solo called “Soulbird” (by Andrew J. Hanley) demonstrates, would you ever see them on “The Voice.” Nothing here comes close to the kind of wit and panache we associate with even the weakest routines on SNL and other comedy showcases.
Presumably inspired by the audience’s suggestions, the show offers lots of autobiographical commentary on the plight of struggling theatre artists; tells us personal stuff about each of the performers; provides parodic jabs at big-time commercial theatre (including a routine from Hamilton that stops short when a note about not being able to exceed copyright laws appears); presents passages reflecting socio-political concerns, including what it means to be human; includes a scene in which the actors offer to take off their clothes until someone says “stop” (which, thankfully, someone did very quickly when I went); indulges in audience participation; makes references to contemporary issues, like drone strikes; and so on. The result: a throw-it-on-the-ceiling-and-see-what-sticks hodge-podge.
Somewhere during its 90 minutes the goal of trying to determine what makes the great American drama gets lost. But before that happens, the actors ask the audience to text whether they thought the show was a success, which, indeed, is their ultimate goal. As they stand with their backs to the audience, a scattered number of cell phones light up throughout the recently opened Jeffrey and Paula Gural Theatre. When the results were projected the night I went the actors were delighted to see that over 94% of those texting thought them a success, while around 5% felt the opposite. Early reviews seem to correspond with this result.

Good for them and to hell with my reaction. On the other hand, as someone once said, perhaps we should be a bit more skeptical about polls.