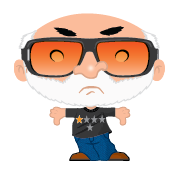 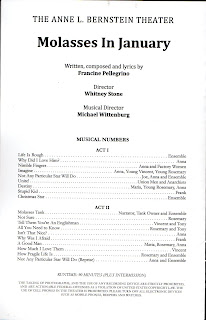 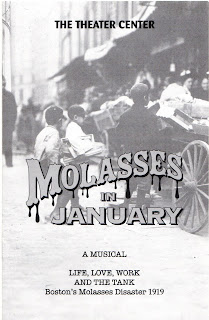 If you’re into disaster porn, a few recently opened plays might tempt you to indulge your proclivities. Over at the Beckett you can watch Daybreak, in which victims of the Armenian genocide come to terms with their suffering, while at 59E59 Theaters, where Operation Crucible is playing, you can share the tension of four men buried under a bombed building during the Sheffield Blitz of 1940. Then there's Time's Journey through a Room at A.R.T./New York Theatres, which takes us to Japan a year after the 2011 Fukushima earthquake, tsunami, and nuclear meltdown. Nor can we ignore Tremor, another 59E59 offering, in which a couple tries to heal following a bus crash with multiple fatalities.
If your tastes lean toward something sweeter, like the Great Molasses Flood of 1919, you might visit Molasses in January, an amateurish new musical with book, music, and lyrics by Francine Pellegrino, at the Anne L. Bernstein Theater.

Yes, the Great Molasses Flood of 1919, which was a very real thing. Unfortunately, the show that takes its name from it is, in artistic terms, a disaster of its own. On the positive side, it hasn’t killed or injured anyone, nor has it damaged any property. Moreover, judging from the cheesiness of its production values, it doesn’t carry a huge price tag, nor is it likely to inspire many lawsuits. On the negative side, well . . . where does one begin?

The aforementioned molasses spill occurred in Boston’s North End on January 15, 1919, when over two million gallons of the goo, which had multiple purposes, including the production of explosives and alcohol, burst into the streets from a poorly constructed tank.

Pellegrino, rather than getting into the weeds about the actual disaster and its consequences, chooses instead to tell a banal, clichéd, pre-spill, laugh-an-hour story about a stereotypical Italian-American family of three: Anna (Lianne Gennaco, who resembles Emma Watson and sings in a sweet but thin soprano), a pretty, single mother, and her two kids, living in the North End during the chaos of World War I.

Anarchists, labor organizers, sweatshops anti-Italian bigots, and the like are mixed in with romantic and marital issues, which begin in 1915, with occasional foreshadowing references to the molasses tank and its potential weakness.

About six or seven minutes before the show ends, we learn of the tank’s bursting, which creates a brief flurry of excitement, and of a secondary character’s death. A few facts about the aftermath are delivered by a Narrator (Joe Redman) but you’ll probably want to know more about this catastrophe, which is far more interesting than the show, and which you can read about by clicking here. A good show lies stuck somewhere in the story, struggling to get out, but Molasses in January isn’t it.
This is a standard book musical, “done,” according to its press material, “in the traditional musical style of the great American Song Book” (if only). Most of its versatility-challenged nine actors play several roles, including grown actors (Zachary Harris Martin and Anie Delgado) playing children who look as old as their mother. Several cast members have basic dance skills, seen when they perform routines by director-choreographer Whitney Stone on the level of what you might witness at the annual recital of your kid’s neighborhood dance school.

The set, functionally lit by Christina Verde, is an ugly, uncredited combination of brown sheets hung over portions of what seems to be the Bernstein’s permanent arrangement (I’ve seen it there before) of walls and doors, with center steps. The arrangement makes it impossible to tell where any scene is set, inside or out. [A colleague subsequently pointed out to me that the disguised set is the  one used for Perfect Crime, the long-running Off-Broadway show that is currently sharing the space with Molasses in January.]

When, at one moment, one of the sheets is removed to reveal a furnace awkwardly painted on a white sheet (the actors dutifully mime shoveling coal into it), the ridiculousness of the visuals becomes even more apparent. Little better are the uncredited costumes, which include a stovepipe hat and a Bobby-type helmet that look like they come from a party goods store.

Surprisingly, though, the 90-minute, one-intermission show’s promotional video, accessible here, reveals a more appropriate—if clearly low-budget—setting, with some of the same actors but including actual children in the company. I wish I knew what happened along the way from wherever that production was given (if anywhere) before it landed in New York. [I've also learned that the show had a workshop at the Davenport Theatre, on W. 45th Street, which would seem to be where the video was shot.]

What the video displays, however, while still exposing problems in the show’s generic, single piano-accompanied music and lyrics, is far superior to the eye roll-inducing show on W. 50th Street.

Early in the show, Anna discards a hanky by tossing it over her shoulder. The night I went it landed on a lighting instrument over the low-ceilinged stage. Not a single actor bothered to pull it down (despite its possible catching fire) and no one did anything about it until toward the end of the intermission, when a stagehand finally retrieved it. This kind of hanky panky epitomized the dilettantism oozing like molasses from every pore of this gloppy production.