"A Slice of Life and Death" 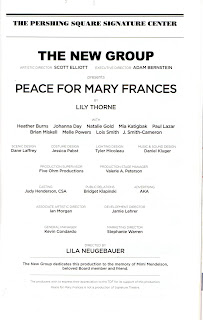 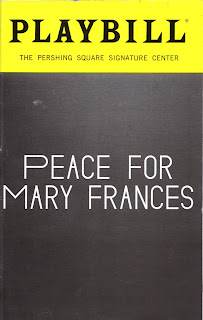 
Peace for Mary Frances, produced by the New Group at the Signature’s Alice Griffin Jewel Box Theatre, is a slice-of-life and death in which a dysfunctional family with the usual love/hate issues faces the imminent passing of their matriarch. Nonny, as she is called, is suffering—not from anything as conventional as cancer or Alzheimer’s—but from a breathing problem that is also causing terrible pains. It’s a situation that—regardless of the specific idiosyncrasies provided here—is one many audience members will definitely recognize from their own experience.
The action takes place in Mary Frances’s West Hartford ranch house, where we see the living room/kitchen at our left and, on a raised platform at our right, the upstairs bedroom where she spends long stretches in bed, visited by other characters. The usually reliable Dane Laffrey has failed to find a solution to the problem of placing two rooms on different levels on the Griffin’s relatively narrow stage, creating what are probably the worst sightlines of any mainstream show I’ve seen in a long time.
Chief of Mary Frances’s visitors are her middle-aged daughters, Fanny (Johanna Day, Sweat) and Alice (J. Cameron-Smith, “the Apple plays”), and a son, Eddie (Paul Lazar, Samara). Other family members are Alice’s grown daughters, Rosie (Natalie Gold, TV’s “Succession”), and Helen (Heather Burns, Dawn in the original production of Lobby Hero). There’s also Rosie’s infant, whose frequent squalling adds one more ingredient to sound designer Daniel Kluger’s cues for music, TV shows, rumbling effects, and so on.
Fanny, a childless, recovering drug addict, with emotional issues, works as a security guard at the YMCA. She shares caretaking duties with Alice, a divorcée who has given up her job as an astrologer to look after Mary Frances (who pays her, thus planting seeds for a dispute). The sisters are also volatile rivals for mom’s affections. The feckless Eddie, a lawyer, looks after Mary Frances’s legal and monetary affairs. These three, with Alice’s daughters—housewife and mother Rosie, unattached, successful TV actress Helen—must cope with how best to navigate the physical, emotional, and medical needs of the ailing Nonny.
As is so often the case in real life, Mary Frances, a widow whose husband—often referred to—died 18 years earlier, is not the most pliable of human beings. Still with her wits about her, she’s quite capable of lashing out at family members who don’t accede to her demands or live up to her requirements, while simultaneously realizing just how much she needs them. As written, directed, and acted, however, her energy level sometimes makes her seem more likely to be on the road to recovery than the one to eternal rest.
Thus the conventional setup: a dying, suffering matriarch needs attentive care to make her last days as comfortable as possible, which will require regular doses of morphine. "When in doubt: medicate," goes the mantra. The bickering family is forced to consider placing mom in an institution or opting for hospice care. We learn about the details of hospice care from Bonnie (Mia Katigbak), the nurse assigned to look after Mary Frances, and Michael (Brian Miskell), the psychological social worker who offers his advice. All this material plays like an infomercial on how to provide homecare for a loved one.

Angry flare-ups and dull discussions occupy the self-involved family members, including one fed-up character’s physical attack on another; Mary France fluctuates in her responses to her children and the money she plans to leave them; Clara (Melle Powers), a round-the-clock nurse from Ghana, offers Mary Frances much-needed solace; and time takes its inevitable course.

Directed by the ubiquitous Lila Neugebauer at a ploddingly naturalistic pace, the episodic play’s many scenes slog along, shifting back and forth from the bedroom to the living room, as the conversations hit one expected topic after the other. Even the scene breaks drag: the lights fade slightly, the actors amble off or make prop adjustments, music plays, the lights rise. When a bit of local color is needed, we get a joke (perhaps too strong a word for it) regarding a Jewish neighbor, or, more egregiously, the identification of Mary Frances’s family with the Armenian genocide of 1915.

Thorne succeeds in condensing the typical quarrels, questions, and confusion surrounding a family’s waiting for a sick, elderly person to die that most people encounter, but that doesn’t mean it all adds up to a compelling play. Since Mary Frances’s fate is sealed, all Thorne can do is to gin up tension by stirring family resentments, particularly those related to the sibling rivalry between the unstable Fanny and the resentful Alice.

Peace for Mary Frances, despite being far too long for its subject, would have been much more painful to sit through with a lesser cast. While its situation is universal, its dramatization is so ordinary it borders on cliché. When peace comes for Mary Frances it does the same for the audience.*

*I sat in front of the gracious Jeremy Irons at Peace for Mary Frances and had a nice little chat with him about his excellent recent documentary, Trashed, concerning the huge, worldwide problems of garbage disposal. It proved a more useful icebreaker than gushing over his many acting accomplishments, although he appreciated my mentioning his Masterpiece Theatre performances on "Love for Lydia" very early in his career.

Accompanying him, in addition to his human companions, was his bichon frise/Jack Russell mix, Smudge, who, apparently, follows his master wherever he goes.

Smudge remained silent throughout, pondering the play's ruminations on mortality, but at, at one point in Act II, let out a sharp bark before settling back into his more peaceful mode. His ruff comment came at a not particularly important moment in the proceedings, so it wasn't possible to detect in it a canny canine's critical bow wow directed at the actors. More likely, it was the result of a careless foot coming in contact with one of Smudge's Pinteresque paws.

The Signature should be commended for being so open to audiences of species diversity, although I'd like to be there when Cameron Diaz visits with her Great Dane. I understand, by the way, that the fire hydrant outside the theatre on 42nd St. is designated as gender neutral.