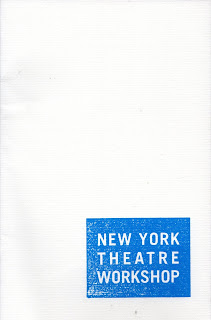 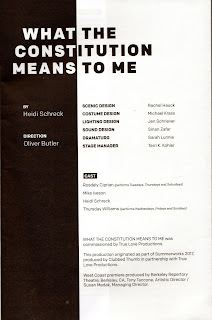 There are often times when the American public shows intense interest in the United States Constitution. Usually, this is when a new amendment is being contemplated, a particular issue is before the Supreme Court, or a new appointment to SCOTUS is under consideration. The latter condition, of course, is largely responsible for the present moment being so darned hot.
Cable news programs have been doing their best to keep political junkies tuned to the wonky subject of constitutional interpretation. A small number of recent films and plays have looked at the Constitution through the eyes of particular individuals. Supreme Court Justice Ruth Bader Ginsberg, for example, is the focus of the popular docudrama RBG, while Justice Scalia is the basis for the Off-Broadway biodrama The Originalist. In the unusually compelling What the Constitution Means to Me (WTC), playwright-actress Heidi Schreck takes on the broader field of the Constitution itself, with particular reference to the fourteenth amendment and, in her dramatic context, its relation to the ninth.
Schreck, whose Grand Concourse provided food for thought at Playwrights Horizons a few years ago, is a really smart cookie who, at 15, began earning college scholarship money while competing, and usually winning, American Legion debate contests focused on the Constitution. Over the past decade she’s been developing WTC, under various auspices, the version we see today having been created for 2017’s Clubbed Thumb’s Summerworks Festival, with director Oliver Butler at the helm. Its West Coast premiere was earlier this year at the Berkeley Rep, and it’s currently at the New York Theatre Workshop.

WTC’s premise is that Schreck, playing herself, is here to recreate one of her teenage debates from 1989, which took place at an American Legion post in her hometown of Wenatchee, WA, “The Apple Capital of the World.” Rachel Hauck’s design, lit by Jen Schriever, is a wide expanse representing the paneled walls of a Legion post, lined with dozens of photos of white men in military caps and backed by standing United States and American Legion flags. To further heighten the atmosphere, we’re asked to pretend we’re an audience of cigar-smoking white men.

Schreck remarks that her reconstruction has to rely on her memory of her 1989 speech because her mom discarded it (although she saved such detritus as 12-year-old Heidi’s hair when she cut it off to look like Annie Lennox). She then sets up the situation, for which a Legionnaire (Mike Iveson), in familiar cap and jacket, serves as moderator, setting up the ground rules, announcing the topics, holding up cards noting the time remaining in each segment, and ringing a bell to cut off speech.

In part one, the contestants must explain their understanding of the Constitution and how it relates to their lives; in part two, they must extemporize on an amendment they draw at random from a can. Schreck reverts to her 15-year-old self, delivering her speech about the Constitution being a “crucible”; her opponent’s theme, which Heidi disputes, is that the Constitution is a patchwork quilt. The amendment Schreck picks is the Fourteenth, Section One. Briefly, this concerns the equal protection of all citizens under the laws.

As the hour and 40-minute program proceeds, Heidi slips back and forth between her youthful self and her present one, the latter gradually becoming dominant as, driven by the constitutional question before her, she presents what is essentially a memoir of the spousal abuse suffered by her female antecedents, including what she witnessed in the lives of her mother and grandmother. Much of her time is occupied with arguments concerning violence toward women, women’s rights, and abortion. Occasionally, the narrative appears to drift off on tangents, which she herself notes, but nothing she says isn’t without relevance to her arguments.

While we never meet young Heidi’s opponent, Becky Lee Dobbins, from Lawrence, KS, the play’s loose structure allows us to hear from actor Mike Iveson, who temporarily sheds his Legionnaire persona to provide what Schreck calls “positive male energy” in the form of his personal story about his sexuality. Interesting as it is, it’s hard not to consider it an unnecessary distraction.
Toward the end, an even more surprising metatheatrical twist arrives in the person of a 14-year-old, African-American schoolgirl named Rosdely Ciprian, who enters to debate Schreck on the question of whether or not the Constitution should be abolished, each debater taking the opposite position. Meanwhile, pocket-sized copies of the Constitution are distributed to the audience, which is asked to hoot, holler, and howl for or against contestants’ points (not unlike a Real Time with Bill Maher show). At the conclusion, an audience member is chosen to decide the debate winner.
While much of this debate is scripted, it also contains room for extemporaneous discussion. Regardless, Ciprian is an extraordinarily intelligent, remarkably knowledgeable kid (adorably, an audience question the night I went stumped her with the term “bucket list”), who one day might reasonably join SCOTUS itself. If a movie of Michelle Obama’s childhood were made, I couldn’t think of better casting. (Thursday Williams alternates with Ciprian and, I'm sure, is equally as gifted.)

Schreck herself delivers an awesome performance, filled with anger, vulnerability, astuteness, and pain, but also with welcome dollops of humor, often self-deprecating. She’s as potent an actress as she is a writer.

What the Constitution Means to Me is absorbing, and, given its driving pace, there’s certainly a lot to absorb. It’s an educational, if decidedly polemical, event that makes its lessons that much more pertinent by their connection to Schreck’s personal experiences. When it’s over, however, you may consider turning your attention to what the Constitution means to you.

What the Constitution Means to Me
New York Theatre Workshop
79 E. 4th St., NYC
Through October 28