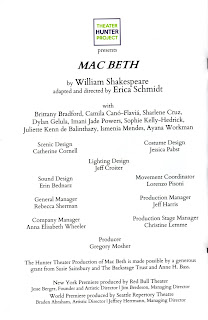 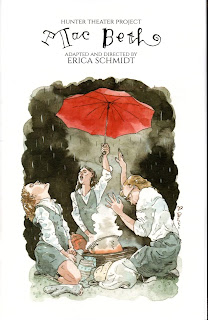 Last spring, director Erica Schmidt’s radical staging of Macbeth, respelled Mac Beth, gained critical acclaim when produced by the Red Bull Theater at Off Broadway’s Lucille Lortel Theatre. I was one of the production’s less enthused visitors, as noted in my review. Aware of many colleagues’ high opinions of it, I decided to revisit the production in its return visit, now playing at Hunter College’s Frederick Loewe Theatre, to see if I may have underestimated it.

Four of the original seven actresses have returned: Ismenia Mendes as Lady Macbeth, Ayana Workman as Banquo, Sharlene Cruz as Witch 3, and Sophie Kelly-Hedrick as Witch 2. The new cast features Brittany Bradford as Macbeth (which switches the role from a white to a black actress), Camila Canó-Flaviá as Mcduff, and Dylan Gelula as Witch 1, but the dynamics of last year’s staging remain intact.

Unfortunately, my opinion didn’t change, although I must applaud the cast for its unmitigated ferocity and commitment to Schmidt’s concept, which receives a detailed rationale in the program notes. This background is interesting but theatregoers can decide for themselves how convincing it is. Readers wishing to read my review of last year’s staging can do so here. I am providing below photos of the new production for those who might be interested.