Vignettes of a Border Checkpoint ****

Are there any sweeter words for tween and teen theatergoers than “Take out your cell phones—no, really!” In Kaneza Schaal’s and Christopher Myers’s Cartography at the New Victory Theater, the audience is invited mid-show to log in to a designated Wi-Fi network and map their family history by selecting their countries of origin.
As this happens, a map projected on stage shows live coverage of everyone’s journey to the United States via red lines that become a beautifully tangled mass. As this is New York City, the interactive map, at the performance I attended, unsurprisingly but quite thrillingly, showed representation from all corners of the world and everywhere in between. And because I was allowed to have my phone out, I snapped a pic: 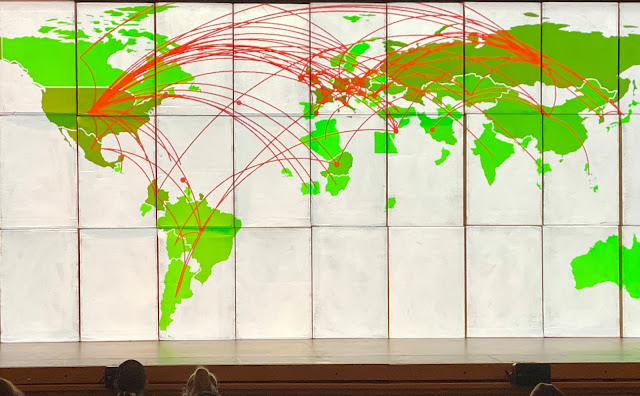 Impressively, the phone business is handled swiftly and the performance resumes. The actors on stage are back at a border checkpoint waiting room, where much of the action has taken place thus far.

Written by Myers and directed by Schaal, Cartography is inspired by the artists’ work in
Munich with refugee youth, ages 11-17, from over 12 different countries, including Syria, Afghanistan, Iraq, and Rwanda. Schaal and Myers use map-making as a tool to help these young people share their stories, represented via four storytellers. 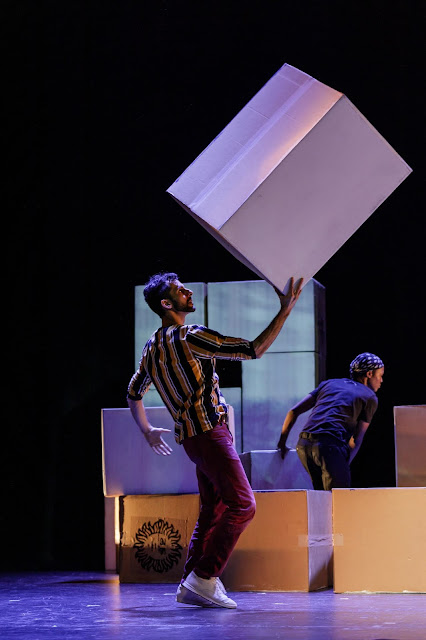 As the refugees (Janice Amaya, Noor Hamdi, Victoria Nassif, and Malaika Uwamahoro) wait around for their paperwork to be processed, they muse about their experience. Migrating from the Middle East, Africa, and South America, this ain’t their first rodeo—that, is, border. In fact, it’s one person’s seventh. Frustrated by the never-ending pile of forms that ask them why they have arrived but provide tiny boxes for answers, as if their life can be summed up in so small a space, they share snippets of stories of the journeys that have gotten them to this point. 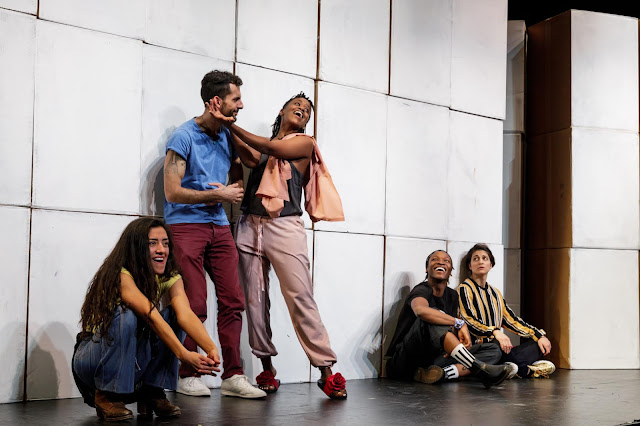 In one scene, the storytellers take turns blowing up an inflatable raft with a manual pump, creating a frenetic pulse as the story of a separated father and son builds, culminating in the actors all climbing into the raft in a silent moment, as the waves surround them (Myers also designed the production).

Eventually, the ensemble steps forward to reveal themselves as actors by shedding the accents they have been using. They take turns delivering monologues of their histories, which I thought the most engaging segment because of the depth of the personal narratives that were lacking in the bits and pieces of the previous refugee vignettes. 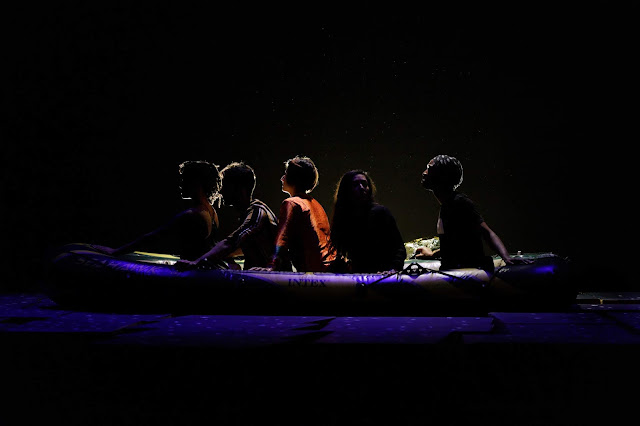 The production is written for young audiences, so there’s an intentional lightness and humor to its tone, even in the face of serious, sometimes tragic, content.

Before the show, families participate in educational activities in the New Victory lobby, including a neat, virtual-reality glimpse at refugees in a raft, the chance to build one’s own passport (stickers are provided!), and to explore questions like, “Why would someone flee from home?” and “What does hope mean to you?”

Cartography succeeds as an excellent catalyst for discussion among young people, inviting them to explore their own history and effectively draw their own map.


Elyse Orecchio studied musical theatre at Emerson College, acting at CUNY Brooklyn College, and English Linguistics & Rhetoric at CUNY Hunter College. She has worked in nonprofit communications for more than a decade and lives in Sunnyside, Queens. eorecchio@gmail.com IG: @elyseorecchio