"Baby, It's Cold Outside" 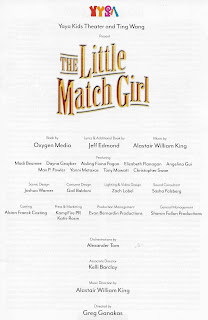 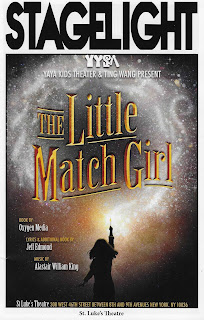 On the subway ride over to St. Luke’s Theatre, my nine-year-old lil’ buddy Veronica and I read the 1846 Hans Christian Andersen fairytale on my phone to prep for a musical adaptation of The Little Match Girl. 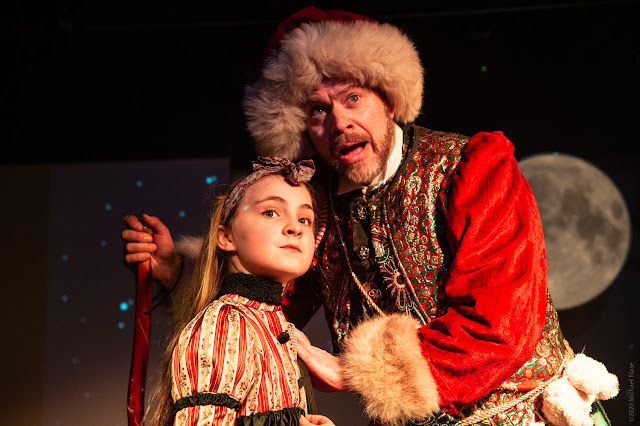 If you’re unfamiliar with the tale, as I was, spoiler alert: there is no happily ever after. We wondered if the production we were about to see would change the ending on par with other dark Andersen tales that have been Disneyfied, like The Little Mermaid and The Snow Queen. 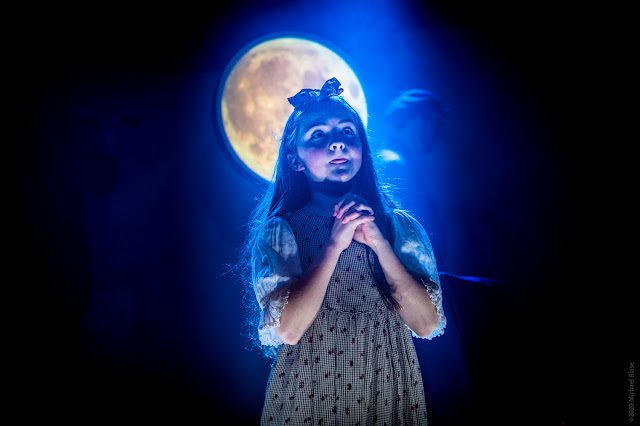 Happily, as promised in its promo, Yaya Kids Theater and Ting Wang’s production of The Little Match Girl stayed true to the story and, to my surprise, ended in the sad tableau of a little girl who had frozen to death. The audience was sprinkled with young theatregoers like my date, and I could feel the shock in the room. “Did she just die?” the girl to my right asked her father and started to cry. 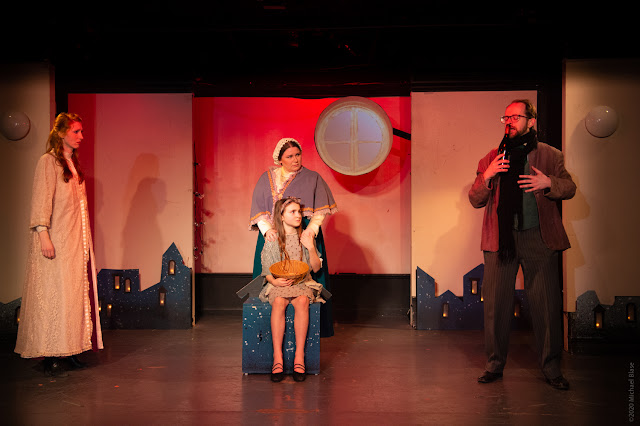 But wait. I don’t mean to give you the impression that The Little Match Girl is strictly dark and depressing. There are, after all, charming, swirling musical numbers and tapping geese. Director Greg Ganakas offers a well-rounded story of heartache and hope uplifted by magical realism as the Little Match Girl is drawn in and out of fantasy. The staging offers beautiful visuals such as esoteric ensemble dancing with matches (L.E.D.-lit—good move) that fade out along with the actors. 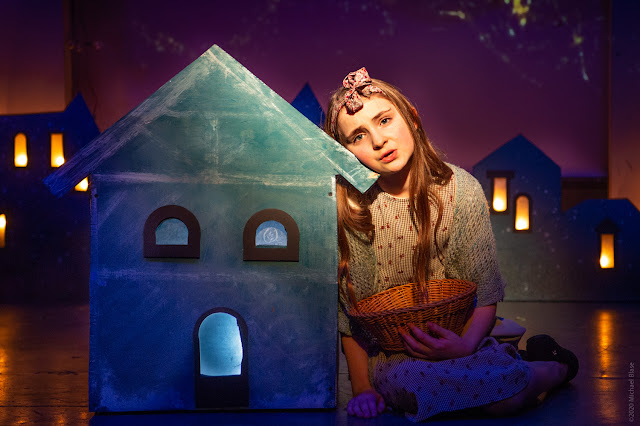 The cast is led by the impressive young Aisling Fiona Fagan, playing a little girl in rags who feebly attempts to sell matches to support her family. Unable to sell even a single match, she’s sent back on the freezing streets by her angry, drunken father (the rich-voiced Tony Mowatt) on New Year’s Eve. There, her shoes are stolen and she’s shunned by the townsfolk. Cold and exhausted, she falls into despair. 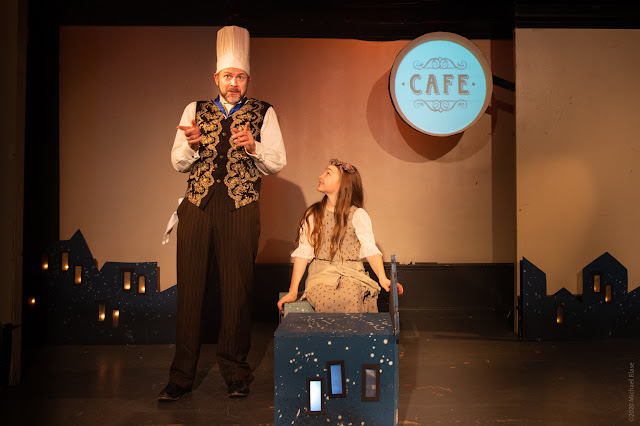 Desperate for warmth, she dips into her wares and decides to strike a match. With each match she lights, she enters a new realm in her imagination. At first, she conjures images of a joyful Christmas with happy parents, where food is bountiful (this is where the fabulous tap dancing geese come in) and she basks in her grandmother’s love. With the strike of another match, she recalls when her family fell apart: as her mother (sweet soprano Elizabeth Flanagan) fell sick, her father spent the money she earned selling matches on liquor instead of medicine. As her husband cradled a wine bottle, her mother reproached him: “When was the last time you held our little girl like that?” 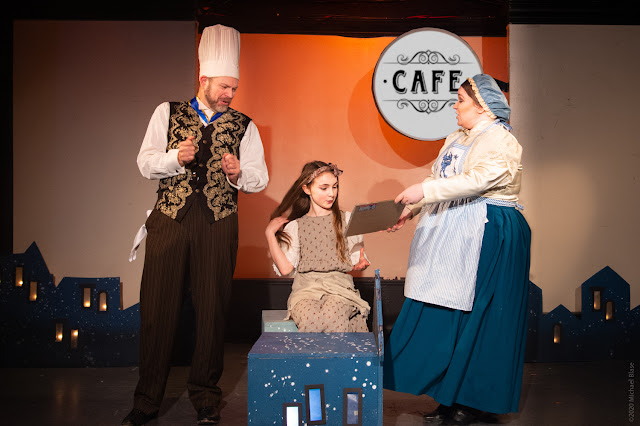 When she runs out of matches, the little girl’s fantasies end and she freezes to death. The townspeople regret having ignored her on the streets. And yes, it’s as sad as it sounds. However, the production ends on an uplifting note as the little girl is reunited with her late grandmother (Dayna Grayber). 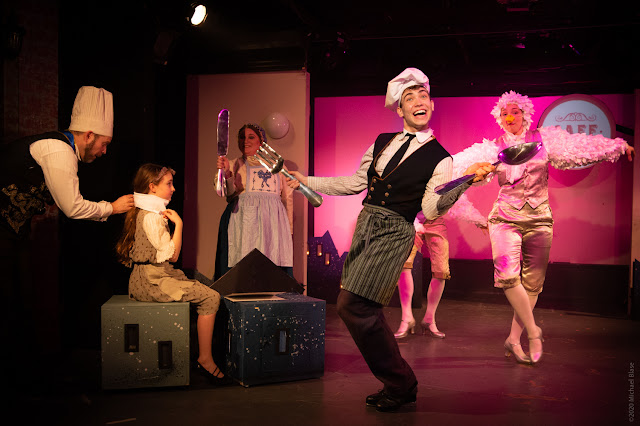 Joshua Warner’s glorious set, along with Zack Lobel’s mystical lighting, lend a good deal to the enchantment of the piece. A sphere hanging at center stage becomes a moon, a clock, or a window thanks to Lobel’s projections as the actors move about on wheeled cubes that double as cafe seats and street ornaments. Gail Baldoni’s lovely costume designs complete the picturesque puzzle. 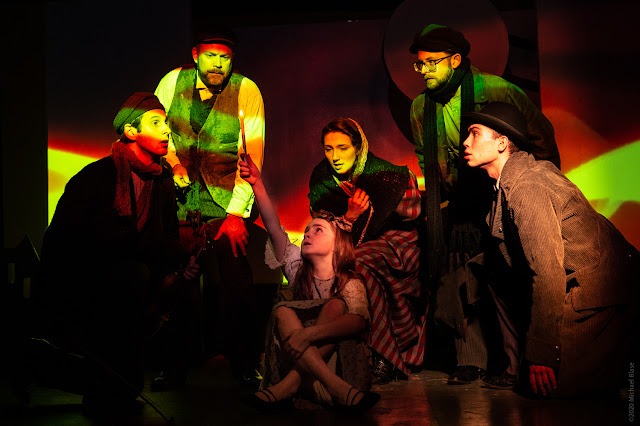 “Just around the Corner,” terrifically sung by Fagan, is a standout song by Alastair William King and Jeff Edmond, and a very talented ensemble delivers the rest of the lively score, all the more enhanced when Yanni Mextaxes strums his fiddle. 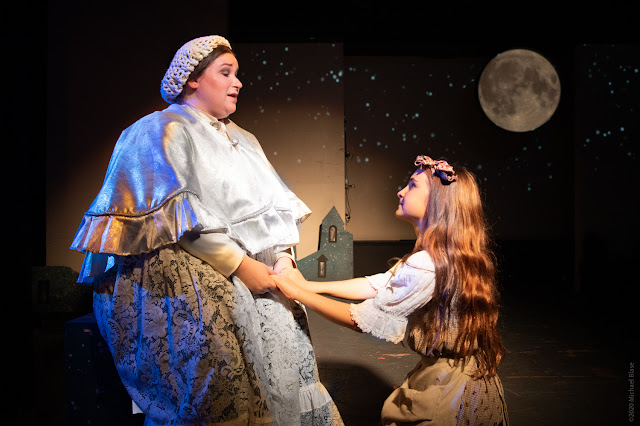 I’m always in favor of a TYA production that respects children enough to trust that they’re capable of handling emotional complexity. My young companion, wise beyond her years, said she was glad they didn’t change the ending because the Little Match Girl goes to a happier place. With the show running only an hour, there’s time after the curtain call to take your child to a happier place, like an ice cream shop.

Elyse Orecchio studied musical theatre at Emerson College, acting at CUNY Brooklyn College, and English Linguistics & Rhetoric at CUNY Hunter College. She has worked in nonprofit communications for more than a decade and lives in Sunnyside, Queens. eorecchio@gmail.com IG: @elyseorecchio