All theatre in New York, of course, has been closed because of the Covid-19 outbreak. The following is a slightly belated review covering a production that had two performances, February 28 and 29, 2020.
“What Next”
By John K. Gillespie (guest reviewer)
We enter the Skirball Center’s performance space to see a stage blanketed with what might appear at first glance to be post-earthquake/tsunami rubble. Taking our seats, however, we see it’s actually household items and implements more or less neatly arranged, like an installation, but rubble nonetheless. It’s the look given to the impending performance by sculptor Kaneuji Teppei, Japanese playwright-director Okada Toshiki’s collaborator on this touring production: lined-up soccer and tennis balls, upside down pans and flower pots, paraphernalia for games, rope, rocks of various sizes, tree limbs, a water fountain, all sorts of pipes, water bottles, appliances, photos/pictures (some of pet cats), a camera on a tripod, and, upstage, the large outline of a house. There is also an annoying nonstop, metallic stream of noise, like something electrical run amok.

That’s the environment for the six actors, who for the rest of the play must step gingerly among the hundreds of objects, sometimes tripping over them. One character picks up a large aluminum bowl, covers his head and takes a siesta. Another holds up a loose tree branch. Yet another is filmed standing still, her image appearing on a narrow screen.
Finally, a character speaks (in Japanese with English supertitles): he’s heard a sound—the annoying squeal striking everyone’s ears?—that he thought was the fridge, but, nope, it was the washing machine. He speaks slowly, his movements stylized in Okada’s signature way, here conveying tentativeness, anomie, passivity. The character thinks the sound might be the washing machine’s filter: “Maybe I could fix it,” he says without conviction, “but there were no instructions in the manual.” No amount of trying helped, so he can’t fix it.

Two characters pick up tennis balls, then replace them. Another character standing outside what might be a tent (perhaps what’s left of a house) speaks as to someone inside, who maybe had died: may he rest in peace. A woman comments that the laundry is 10 minutes away, not near, not far, walkable. She takes her shoes off, dons red socks and red jumpsuit (is she heading toward the radiation zone?).
Everything we’ve heard so far is routine, ordinary. What could it mean to mention fixing something so trivial as a washing machine filter, when people’s homes, city, and lives have been cruelly shaken and swept away? Are these survivors merely attempting to validate their existence by touching or mentioning only what is concrete and right in front of them? Perhaps, at this moment, nothing else is possible. Okada may be attempting to turn such unspeakable despair into images, something concrete, graspable, because whatever words his characters use, they can’t possibly suffice to fill the chasm of their despair, just as the character with the broken water filter, try as he might, can’t fix it.
Okada also has in mind something larger, affecting all Japanese, simultaneously dependent on the machines they’ve acquired yet unable to repair them. Beyond that humbling truth, he’s signaling that their ever-burgeoning, technologically complex economy has so inundated the Japanese psyche that they are now divorced from their elemental, natural selves, hardly able to function without machines propping them up. Okada’s post-performance comments that he wanted his actors to be “half transparent,” indicated to me a histrionic effect calculated to suggest that, even as survivors, they now hardly register in Japan’s hell-bent, visionless economy and amount to little more than additional rubble. Okada’s scope includes more than Japan; we can hardly avoid concluding that all our washing machines have broken down and we can’t fix them.
Meanwhile, the stage rubble is concrete proxy for the post-earthquake/tsunami destruction, certainly, but also for the rubble left by Japan ensnared in the sticky throes of an extremely consumptive capitalism. The whole world, then, is symbolically stumbling through rubble, trying to find something, a system, anything that might work better. Okada may not be saying that, beyond global warming, human greed has caused the earthquake and tsunami but, rather, that it has clearly made the resulting destruction all the more horrific. 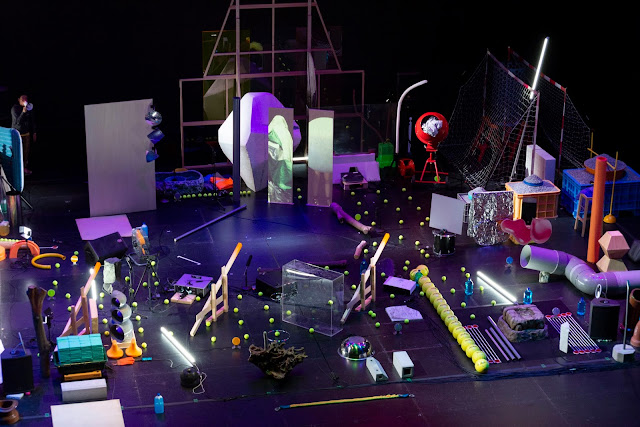 This is not “normal” theatre. Frankly, it’s anti-dramatic. Okada organizes his over-long play with points made through his characters and images over and over. There is no dramatic tension, an aspect most would identify as essential to effective drama. As Part 1 (not Act, as in “normal” theatre) ends, Okada frames a fundamental question about human communication, when a woman says of a man she knew, “I never really shared much of myself with him. Maybe I can now.” But we’re left to wonder whether it’s possible. Does she talk to him? Is he even still alive?

Part 1 ends with the characters gathering under a synthetic tarp. Has the need to wash clothes brought them to the laundry place? Are they starting a new community? We don’t know. The characters return all the items they’re holding to the stage set and exit. It’s a reminder of how Japanese tend to behave in daunting circumstances, recalling the Tokyo homeless with their tidy lean-to structures for sleeping, their footwear neatly placed just outside.
It’s no surprise that the context for this strange performance is the overwhelming catastrophe of March 11, 2011, known as 3/11. That event has joined two others as pivotal in Japan’s modern history: the cataclysmic socio-political upheaval precipitated by Commodore Perry’s two trips to Japan in 1853-54, busting Japan’s long isolation, and the catastrophic bombings of Hiroshima and Nagasaki in 1945, hastening WWII’s end. 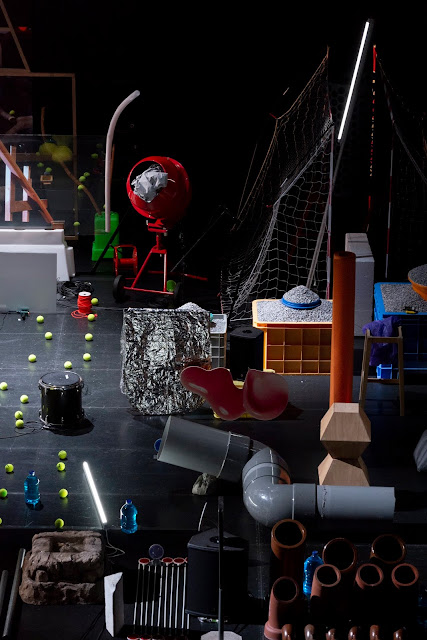 Fed wrong and/or incomplete information about the Fukushima nuclear fiasco by their government and Tokyo Electric Power Company, Japanese in large numbers lost confidence in their government and attendant institutions. What actually happened, they wondered? Why was the government so slow to respond? Why not tell the truth? Some 16,000 died, not to mention another few thousand injured or missing, and towns were wiped out. Fukushima itself remains cordoned off, access prohibited, its nuclear reactors still not completely shut down. And Japanese began to wonder about the long-term impact not only on the Fukushima area but also on Japan at large, their government, business practice, economic viability, natural environment, and very existence in one of the world’s most earthquake-and-tsunami-prone regions. 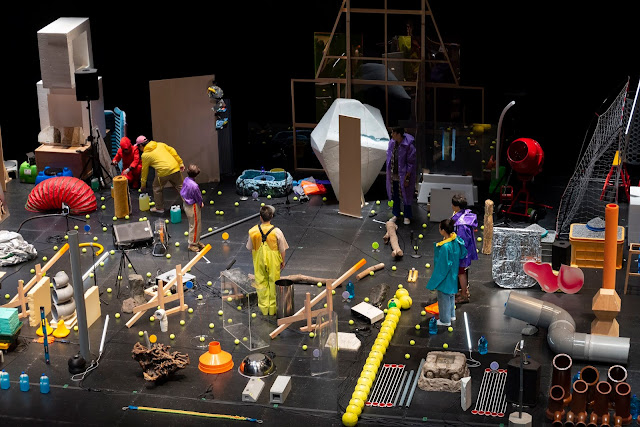 By 2011 Okada and his company, chelfitsch (founded in 1997), already with considerable domestic success, were beginning to garner recognition overseas. However, 3/11 gave him existential pause. Born in 1973 in Yokohama, part of the massive Tokyo metropolis, he grew up in the cradle of Japanese capitalism and its boom economy in the 1980s, but after 3/11, suddenly and with many compatriots, he felt the capitalist pendulum had swung too far, that Japanese economic development was ultimately not ensuring the security and wellbeing of its citizens or of its natural environment. Taking a hard decision, he moved his young family to Kumamoto in the southern island of Kyūshū and began living in a home where environmental consciousness and conservation held sway. 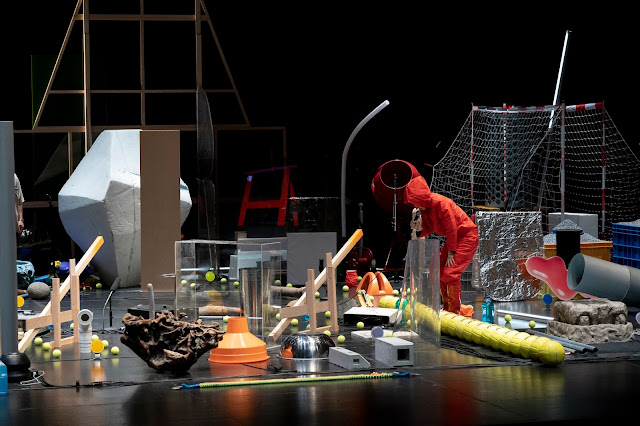 He continued writing plays, often with a distinctive environmental consciousness, as with Zero Cost House in 2012, partly based on his experience moving to Kumamoto and living communally. Peter Eckersall of CUNY Graduate Center, who knows Okada’s work well, has appropriately called such plays “eco-drama.” Specifically, Eraser Mountain originated with efforts to rebuild the decimated town of Rikuzentakata, near Fukushima. 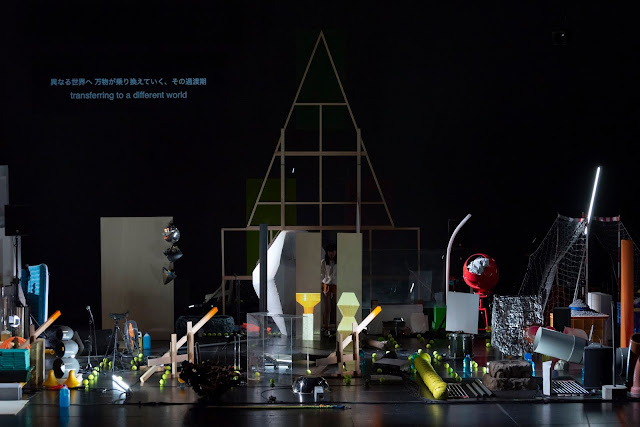 Okada questioned the grand plan to restore Rikuzentakata’s Pacific coastline with earth and rocks from nearby mountains to raise that stretch by some 10 meters to prevent potentially recurrent destruction. What would that do, Okada wondered, to the surrounding wildlife and natural areas, notably the mountains that would be largely erased? How about prudently reflecting at greater length on the long-term effects of 3/11, before blindly forging ahead to recreate the town as it was? 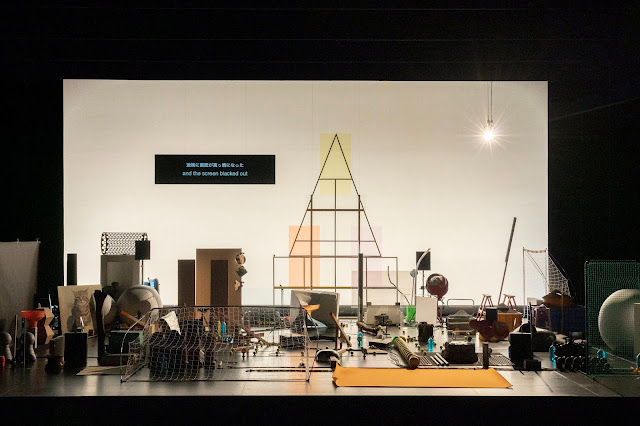 Part 2 of Eraser Mountain strikes a different tone than Part 1. The rubble remains but the annoying, head-splitting noise has stopped. A male character, wondering aloud about what he sees, is confronted by the filmed image of a woman speaking. Okada uses such “eizō (video or image)-theatre” to integrate performance aspects, as with the rubble in Kaneuchi’s collage-like installation set and, here, the now ubiquitous phenomenon of human interaction with a projected human image. 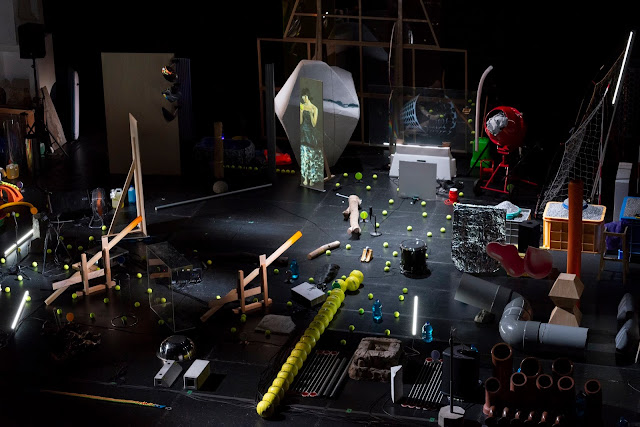 The woman’s words ensue from the Part 1 idea that we depend on machines—i.e., for her very image—but don’t know how they work or affect us. She raises the issue of time machines, intimating that the government keeps them hidden and, further, that machines may want to be part of the democratic process. The man listening is puzzled. Is this fake news, a conspiracy theory? The woman continues, referring to the nature of time, “I hope you can understand,” then, “but, of course, you don’t.” She describes the contrast between the conventional apprehension of time as moving forward, not standing still—that is, clock time (past, present and future), as opposed to state-of-being time (past, present, and future as a single moment). She assumes this man is unable to grasp time as just a state of being, not advancing like a clock ticking.

She’s certainly right. His skepticism and consternation probably strike us as obvious, especially because the projection is generated from a machine, which we’ve already learned in Part 1 is not reliable and could soon break down: a profound awareness of the reality that Japan’s vaunted, defect-free manufactured products actually break down. We feel the man’s confusion. 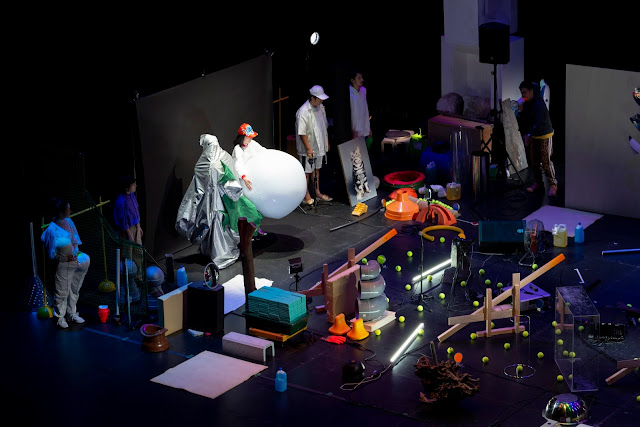 Indeed, in grander terms, Okada intimates that we shouldn’t blindly follow any quick recovery strategy. For example, what if the recovery plan were based on fake news, a shallow conspiracy theory, or so-called received wisdom that now has been shown concretely to have failed? Although not rendered dramatically, Okada’s socio-political conviction is nonetheless powerfully presented here. 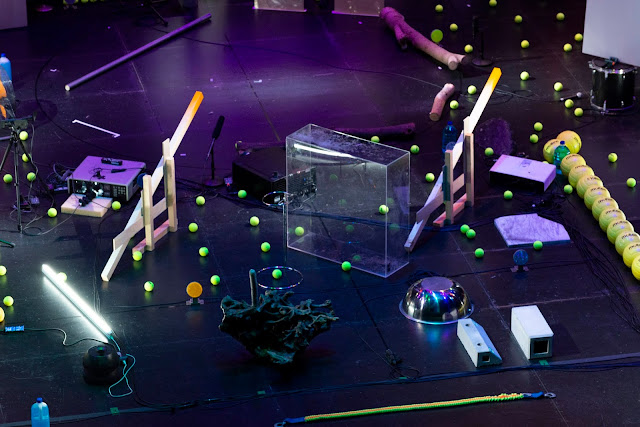 Re-enforcing that conviction, Part 3 takes on an understandably somber mood. In turn a male figure is projected, then in his place a female, then a rock, conveying a feeling that, in rebuilding Rikuzentakata, humans may be no more reliable than the rocks reclaimed from the nearby mountains to raise its shoreline. 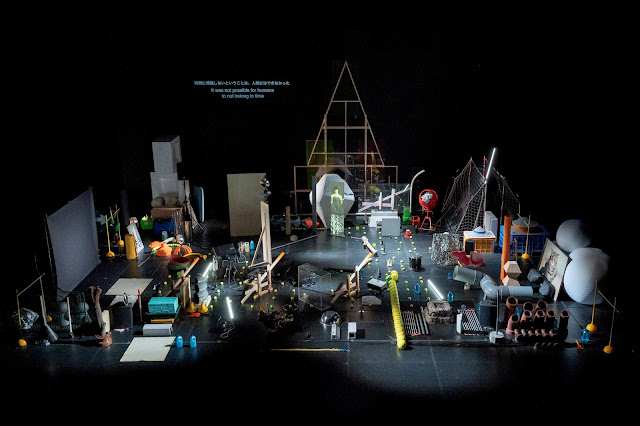 Also projected are objects, like stakes denoting danger zones. Someone says, “From over here we feel we were abandoned,” marking 3/11 as a concrete, existential turning point for those involved. They are not paranoid, they say, as they move 3/11 rubble around on the stage, aimlessly, half-transparently, at times tripping over objects, emphasizing that, without their machines, now defective, they are unsure how to proceed. Tellingly, one character says, “If we were plants, we would have comrades,” emphasizing that they are now victims, all alone, abandoned, without their deceased comrades. What’s next? 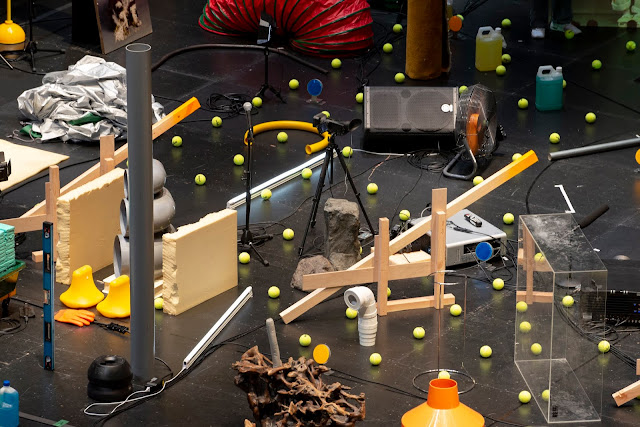 The conclusion is darkly meditative. A gentle voice relates what’s happened and will continue to happen. Where there were rice fields, “there was no audience for rice planting.” As a sort of leitmotif phrase, “there was no audience for . . .” is repeated several times, with respect to other human activities. Similarly, when storms come to the mountains, now erased, “there were no listeners for thunder.” What we see as the light fades out is the characters on the stage continuing to work. There is no end in sight to their work.