For David Rabe to follow up the fervid response generated by his first play, The Basic Training of Pavlo Hummel, with another work of near universal acclamation was an achievement of great magnitude. It was something the playwright, for all his occasional success, never again experienced. Critics and audiences were thrilled at how successfully he had risen to the challenge, demonstrating that his was far more than a one-play talent.  Producer Joseph Papp even presented Rabe’s new play while the earlier one was still running, this being the first time Papp had produced simultaneous works by a living playwright. It was also the first time he had given a second hearing to anyone other than Shakespeare.

Sticks and Bones proved more powerful and provocative than its predecessor, even moving to Broadway, where it enjoyed a decent run. This searing, painful drama inspired Clive Barnes to declare that “it holds the interest and moves the heart. It makes you think and it makes you laugh.” The play details the experience of David (David Selby; succeeded by Drew Snyder), a Vietnam vet, who returns, blinded, to the bosom of his American pie, TV-sitcom family, the parents dubbed Ozzie (Tom Aldredge) and Harriet (Elizabeth Wilson; succeeded by Rue McClanahan), the sons David and Rick (Cliff DeYoung; succeeded by Alan Cauldwell), after TV’s iconic Nelson family.

Enraged and appalled by what he has witnessed and undergone in Southeast Asia, David strives to bring his new reality to the insular world of his parents and brother, but their behavior reveals an unseeing, plastic outlook totally incapable of understanding what he wishes to convey. To them his manner seems merely callous and unheroic. Ever present to him is the memory of a Vietnamese girlfriend whom only the audience can see, but who is invisible to the bigoted and narrow eyes of his family. 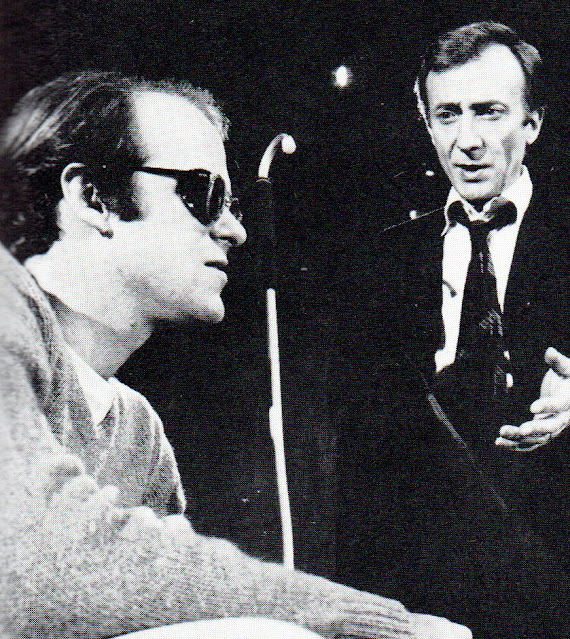 Unable to transform his family’s perceptions of the war, he ultimately submits to his brother’s suggestion that he kill himself, allowing Rick to slit his wrists for him, thereby removing from the family the specter of the war’s horrors he would have forced them to confront.

Told in a conceptually unusual blend of realism and surrealism, Sticks and Bones was described as being crammed with symbolic suggestiveness, metaphorical meanings, raging rhetoric, emotional expression, and satirical sass. Rabe had put the 11 months he spent in Vietnam to great use in bringing home the tried and true message that war is hell. Those who were enthralled by the Off-Broadway staging thought it even better on Broadway, although some believed the intimacy of the original was lost on the large stage.

Brendan Gill praised Sticks and Bones for being “a beautiful and harrowing study of American family life and American political life as a double nightmare from which only the most severely mutilated among us struggle to awaken. In the gravity and acuteness of his intelligence and the elegance of his literary skills, Mr. Rabe is already a formidable figure.” From Harold Clurman came the admission that the play was “savagely ironic. It has a cold, hard bite. With very little outward violence, it stings and wounds.” Edith Oliver disputed the contention that the play could fit any predetermined genre, like surrealism or black comedy, because its form was so unique. However, she herself emphasized above all else the corrosive humor and parodic tone of the proceedings. John Simon, like Mel Gussow, compared Rabe to the young Eugene O’Neill, “demonically obsessive, harshly penetrating and perceptive, large-spirited and unwieldy, and ultimately stumbling in his stabs at poetic prose.”

Few caviled at the fast-paced, imaginative, and sensitive staging of Jeff Bleckner, or the extraordinary characterizations of the cast. Perhaps Elizabeth Wilson’s Harriet, model of domesticity, pleased the critics more than any other performance.

In 2014 I reviewed a revival of the play at the Signature Theatre, which you can access here.

Official acknowledgement of the play and production came via a special citation from the New York Drama Critics Circle; a Tony Award for Best Play; the Outer Circle Award for David Rabe, as well as the Variety Poll choice for Most Promising Playwright; Drama Desk Awards for Tom Aldredge, who also nabbed a Tony nomination, and Jeff Bleckner; a Tony Award for Elizabeth Wilson, who also won the Variety Poll for Supporting Actress as well as an OBIE; a Tony nomination and Variety Poll selection for Bleckner; and a Drama Desk Award for designer Santo Loquasto.