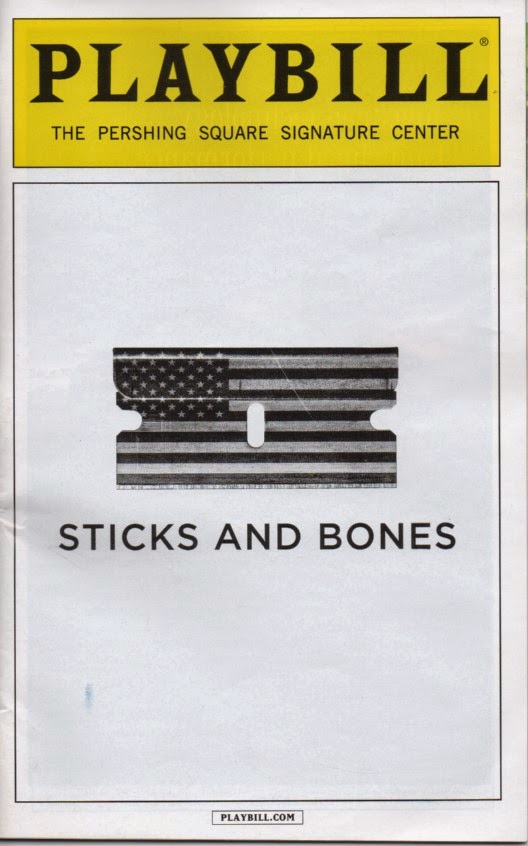 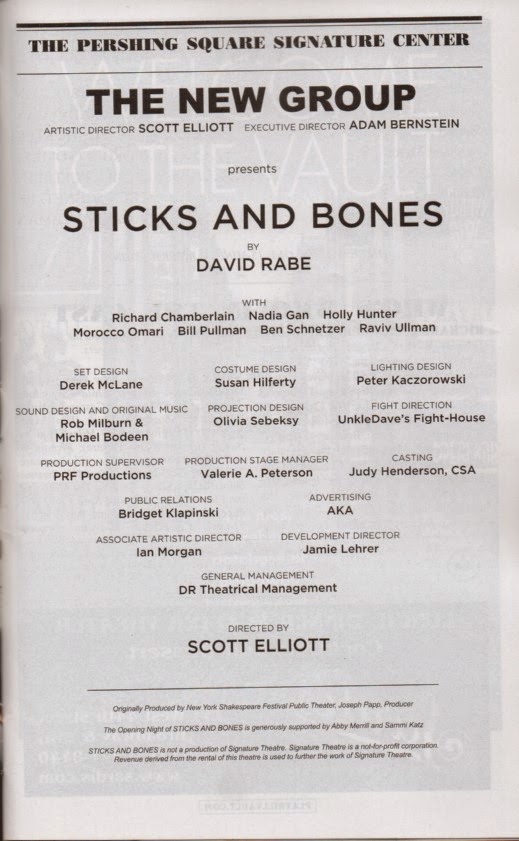 David Rabe’s STICKS AND BONES, now being revived at the Pershing Square Signature Theatre by the New Group under Scott Elliott’s atmospheric direction, originally opened at Joseph Papp’s Public Theatre in 1971 and moved to Broadway, where it won the 1972 Tony for best new play. Long considered a pioneer among antiwar, and specifically anti-Vietnam War, plays, it was the second in Rabe’s so-called “Vietnam Trilogy,” which began with 1971’s THE BASIC TRAINING OF PAVLO HUMMEL and finished with 1976’s STREAMERS. It was not, of course, the first play in the anti-Vietnam protest movement, which usually is considered to have been 1966’s rock musical, VIET ROCK, and it was followed by many other plays and movies that, with very few exceptions, treated the subject of America’s involvement in Vietnam with passionate disdain.
Still, most such works—especially those produced in the 1970s—were more about the effect on those who were going to or had gone to war, or on their families, and not so much on the political realities of why we were there in the first place. Vietnam was only a convenient background for the kinds of experiences universal to people at war, or who had come home to find less than a hero’s welcome awaiting them. This hasn’t changed much in either films or theatre, as FURY, the recent Brad Pitt movie, reveals; despite the detailed specifics of a crew of tank soldiers fighting in Germany in 1945, it’s really about the human relationships among the men amidst the hell of combat, and not the politics of World War II.
So many powerful works about the Vietnam War, on stage and screen, have come and gone since 1971 that STICKS AND BONES, no longer has the power it had in the early 1970s, when it was such a rare bird, and audiences that disagreed with its message were still capable of walking out in anger. Only gradually was STICK AND BONES followed by other dramas that confronted a never-ending war that the vast majority of Americans had come to question and that was tearing the nation apart.

The play still has the ability to stir emotions regarding America’s unceasing preoccupation with sending its youth off to fight, die, and be maimed in questionable wars. But, for all its power, STICKS AND BONES is too burdened with metaphorical and symbolic literary ambiguities that deflect its emotional impact and the reality of its concerns. Its stylistic variations eventually grow wearisome and, although the 8:00 p.m. performance I attended ended precisely at 11:00, I was looking at my watch well before.


Rabe emphasizes the impact of the war on a quintessential American family by making that family into abstractions inspired by the once-popular radio and TV series, “The Adventures of Ozzie and Harriett,” starring the actual family of bandleader Ozzie Nelson, his wife, Harriett, and their young sons, David and Rick. The STICKS AND BONES family lives in a picture-perfect suburban home, here designed by Derek McLane to suggest the residence of another famous TV sitcom family, “The Brady Bunch,” complete with an open-step staircase and fieldstone walls.

Perhaps this is meant to stress the family’s preoccupation with the superficialities of life in TV-land, as signified by the presence of a rabbit-eared TV that figures extensively in the action. Of course, no serious social issues ever arose on “The Adventures of Ozzie and Harriet,” making the show an ideal springboard for Rabe to expose the triviality of American family life, its preoccupation with consumerism, and the alienation and isolation rotting inside its members. But the conceit eventually becomes increasingly less interesting the more the characters display their artificiality.

Son David (Ben Schnetzer), who’s been fighting in Vietnam, is suddenly thrust into the family’s unwilling embrace when he’s roughly returned by a sergeant major (Morocco Omari) preoccupied with all the other damaged soldiers he’s delivering to cities all over the nation.  David, wearing dark glasses and wielding a cane, has been blinded, and the play charts his attempted reintroduction into the bosom of a morally blind family that--much as it tries to accept him so everything can return to what once was considered normal--can’t do so on any but its own terms; for his part, he, after what he’s experienced, is unable to re-assimilate according to its wishes. He finds release from the family’s suffocating ministrations only by retreating to the comfort of his bedroom, seen on an upper level at the rear.

David suffers from what would later be called post traumatic stress syndrome, his anguish amplified by the memory of a Vietnamese girl, Zung (Nadia Gan), he loved and left behind when he was shipped home. Zung moves through the play like a ghost, and, though she seems immaterial, being sensed and felt for most of the play only by David, she eventually assumes a corporeal presence (or so it seems) so that she can be dealt with by Ozzie in the play’s increasingly surrealistic final moments.  David’s relationship with Zung allows his patently racist mother and father to express their revulsion at the idea that he would have a relationship with “a yellow whore.” This parental racism may seem, in 2014, a bit over the top, although one wonders how an average Christian or Jewish American family might feel if their child came home lovesick for a pious Iraqi or Afghan Muslim.

David’s younger brother, Rick (Raviv Ullman), a guitar incessantly slung across his back or being strummed to accompany a song, is eternally upbeat, concerned only with his own gratification (he lives on soda and fudge, and openly describes a sexual experience to his father) and completely oblivious to anyone else’s problems. He’s a perfect example of the impossibility of communication within this family unit, where no one really listens to anyone else. There’s also the pompously self-confident Catholic priest, Father David (Richard Chamberlain), who’s asked by Harriett, a frenetic Betty Crocker avatar obsessed with cooking, cleaning, and religion, to intervene, combining his religious and psychological skills to resolve David’s troubles.

STICKS AND BONES is helped by the presence of a fine cast that must use all their skills to turn their cartoonish characters into people we can truly care about. It’s always fun to watch the diminutive Holly Hunter, who brings to Harriet a wealth of amusingly quirky movements and tics, as she tries to resolve the chaos in her life by cleaning the house and making food. The reliably excellent Bill Pullman makes Ozzie a vivid mess of frustration and confusion, a man conflicted by guilt about having served in a noncombat role during World War II, and who measures his self-worth by itemizing his material possessions. Ben Schnetzer’s David is suitably cynical and anguished, while Raviv Ullman hits his marks as the self-centered brother who provides the bloody solution to the family’s dilemma. Richard Chamberlain, still handsome and vocally impressive at 80, does well as the overconfident Father Donald. Morocco Omari and Nadia Gan make good impressions in their smaller roles.
No play ever has come close to capturing the agonies and ecstasies of Vietnam, both in its immediate context and in that of its implications for American society, as effectively as the many excellent films that have brought it to searing life on screen. The theatre’s limitations require verbal inspiration to take precedence over visual ones, but few playwrights have succeeded in using this limitation to create works of lasting value and interest from what happened over there. STICKS AND BONES, with its use of symbolism, surrealism, and cultural parody, and its incisive language, is among the best of the lot, but its topicality has faded and its insights are too muddled by dramaturgic diversions to make it much more than a fascinating historical artifact.