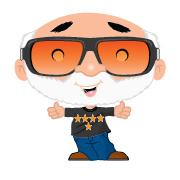 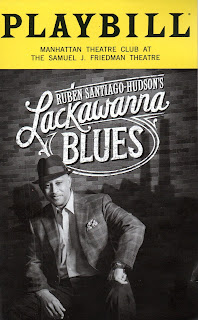 I come late to the Manhattan Theatre Club’s revival of Lackawanna Blues, which I was originally scheduled to see on October 2. But it’s not for lack of wanting to see it. Its extraordinary star, Ruben Santiago-Hudson, suffered a back injury that forced not only the cancellation of my first booking, but also a second, when his injury flared up again. At this point, with numerous mostly highly positive reviews of the show having been filed, all I can do is to simply add the following cherry to the sundae.

Because there’s only one actor speaking all the lines and playing all the characters, Lackawanna Blues belongs to the category of one-person shows. It would, however, lose a huge chunk of its theatrical punch without the awesome presence of Junior Mack, the onstage guitarist who accompanies Mr. Santiago-Hudson, playing low-key, bluesy background music by the late Bill Sims, Jr., during almost every one the show’s ninety minutes.

Mr. Santiago-Hudson, a multitalented New York theatre powerhouse, who also serves as MTC’s “artistic advisor,” is no stranger to the solo format, having done just fine eight years ago starring at the Signature in August Wilson’s How I Learned What I Learned, a memorable performance strangely missing from his Playbill bio. (Mr. Santiago-Hudson, of course, is one of our leading Wilson exponents, both as an actor and director.)

I didn’t see Lackawanna Blues, based on Mr. Santiago-Hudson’s childhood experiences, when it was first produced back in 2001 at the Public Theatre, where George C. Wolfe directed its award-winning production. This was followed in 2005 by a multiple award-winning HBO movie version, starring S. Epatha Merkeson as Rachel “Nanny” Crosby, and a cornucopia of first-line actors in support, among them Jimmy Smits (as Ruben’s father), Terrence Howard, Mos Def, Rosie Perez, Delroy Lindo, Jeffrey Wright, and many others.

These actors played the many colorful characters Mr. Santiago-Hudson recalled from his boyhood growing up during the 1950s in Lackawanna, an upstate New York working-class city, where circumstances saw him being raised by the remarkable Nanny. She was a saintly Black woman who was both entrepreneur and nonjudgmental overseer of those who, in one way or the other, came to fall within her purview as a local boardinghouse proprietor. As lovingly embodied by her onetime ward, she comes off as a pious woman of enormous strength, courage, determination, wisdom, and gentleness, anchored by inordinate depths of kindness.

Lackawanna Blues is more a series of anecdotes built around the sturdy frame of Nanny than it is a conventionally structured play. No matter. Mr. Santiago, dressed by Karen Perry simply in slacks and a casual, rust-colored, cabana-type shirt, with beige stripes, like the kind bowlers used to wear, ably presents the panoply of characters, men and women, he recalls. Merely by shifts in voice, accent, body, and facial expression, he makes you see them parading across the stage.

Keep your eyes and ears peeled for Ol’ Po’ Carl, Mr. Lemuel Taylor, Numb Finger Pete, Sweet Tooth Sam, Mr. Luscious, and on and on and on, including the wide-eyed, innocent Mr. Santiago-Hudson once was. We see each with their limps, their coughs, their stuttering and muttering, their smoking, their boasting, their sweetness, their threats, their coolness, their neediness, their pride, and their suffering.  And each is incarnated with grace, humor, affection, and sufficient accuracy to provide lifelike thumbnail portraits.

With Mr. Mack seated at right center, in and out of the shadows as lit by Jen Schriever with expressive sensitivity, Mr. Santiago freely roams Michael Carnahan’s set of a dark, crumbling, brick background. Into it is set no more than an an ornate, old-fashioned doorway, with a window of frosted, colored-glass panes high above. Hovering overhead down front is a rotating ceiling fan. In this memory-laden space, Mr, Santiago shows that he can not only act but sing (albeit minimally); even more impressive are those moments when he plays a really mean harmonica.

Each season brings an assortment of solo shows, most of them revealing the striking talents of their performers. Just the day before seeing Lackawanna Blues I visited another outstanding, albeit radically different, work in this category, Off Broadway’s Kristina Wong: Sweatshop Overlord. Both shows are autobiographical, the first an affectionate memorial to a long-gone slice of postwar African-Americana, the latter a farcically inclined docudrama with a ripped-from-the headlines political agenda. And both are among the best things I’ve seen during this still young season.