165. AUGUST WILSON’S HOW I LEARNED WHAT I LEARNED 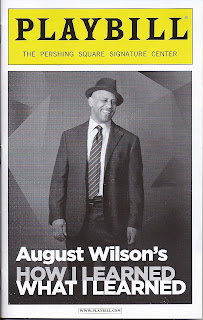 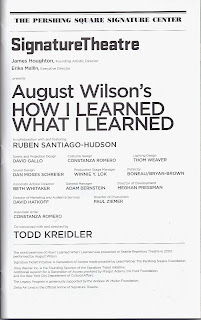 In Terrence McNally’s theatrical potpourri at the Pearl, AND AWAY WE GO, the playwright pokes fun at the current trend of plays that are prefaced by their author’s names, as in EDWARD ALBEE’S WHO’S AFRAID OF VIRGINIA WOOLF? Joining the ranks of these plays that seek to glorify their authors by making their already famous names part of their titles is AUGUST WILSON’S HOW I LEARNED WHAT I LEARNED, just to make sure you don’t confuse it with someone else’s HOW I LEARNED WHAT I LEARNED, even if none exists. Silly as the this self-conscious titling may be for a classic like VIRGINIA WOOLF, perhaps it does have some marketing value for a lesser-known work by a major playwright, like Wilson; if it helps draw people to this well-done piece, more power to it. 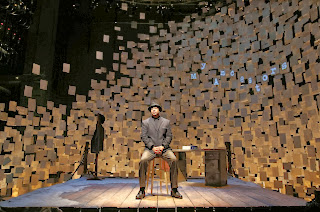 HOW I LEARNED WHAT I LEARNED, if I may call it that, is an autobiographical play Wilson created for his own performance in 2003, when he premiered it at the Seattle Repertory Theatre. It is now being given a superlative performance at the Signature Theatre by the distinguished actor-director Ruben Santiago-Hudson, in a presentation co-conceived and directed by Todd Kreidler. Mr. Santiago-Hudson, who staged the excellent revival last season of Wilson’s  THE PIANO LESSON, is an ideal choice for the job. His incarnation of Mr. Wilson, who died in 2005, is relaxed, honest, real, funny, and highly believable.  He channels the great playwright’s sense of humor, his bitterness at the racial prejudice he encountered, and his profound intelligence and poetic sensitivity, never becoming less than engaging and accessible in immediate human terms.


Mr. Santiago-Hudson performs on a small platform set, imaginatively designed by David Gallo, in front of a semicircular wall of what appear to be hundreds of manuscript pages hanging before a cyclorama. At various junctions, the sound of a typewriter tapping out letters coincides with the appearance of typescript illuminated on the hanging pages to spell out the words that introduce the following scene.  Thom Weaver’s lighting does an exquisite job of bringing a wide range of colors and moods to the production. The scenes themselves have no great sequential continuity, and could probably be rearranged, or even cut, without being noticed. They are a kind of ramble through Wilson’s memory of his growing up in Pittsburgh’s Hill District, with anecdotes about the people he knew, and stories of humorous and violent incidents he witnessed, including a killing. He talks about slavery, the jobs he quit when he felt mistreated, his mother's influence on him, the Catholic church, his self-education, his early love life and the trouble it got him into, his going to jail for non-payment of his rent, and the effect on him of John Coltrane's music. Almost everything has a “black” inflection to it, including Mr. Santiago-Hudson’s acting, which includes moments of singing and dance-like moves.


Not all the material in this 90-minute intermissionless piece is of the same quality, and the sections that describe the difference in behavior about how blacks and whites behave in different social circumstances are unconvincingly stereotypical and reminiscent of tired stand-up routines.
Mr. Wilson, of course, who won two Pulitzer Prizes, one for Fences (1986) and one for The Piano Lesson (1990), is widely lauded as America’s greatest black playwright, and his ten-play Century Cycle, nine of them set in Pittsburgh, is one of the foremost achievements of any modern playwright, regardless of color. He was preoccupied with exploring and expressing the black experience in this country and much of HOW I LEARNED WHAT I LEARNED pictures him as a victim of the racism he encountered. These stories sound plausible when you hear them from Mr. Santiago-Hudson. However, Mr. Wilson’s father was a white man from Germany (Wilson’s birth name was Kittel and he later adopted his mother’s maiden name), and, unlike President Obama, also the product of a mixed marriage, his appearance was more white than black. Maybe I’m going out on a limb here, but the stories he tells of mistreatment because he was black, like the one about a bank teller who refused to give him an envelope, sometimes sound forced, as if he was reading racism into simple unpleasantness, such as white people also experience when dealing with nasty bosses and people with whom they do business.


Such cavils aside, HOW I LEARNED WHAT I LEARNED is a polished work of theatre performed by an admirable artist who holds his audience in the palm of his hand. Ruben Santiago-Hudson and August Wilson are powerful teachers and there's lots you can learn from seeing them joined in this rewarding theatrical lesson.
Posted by Samuel L. Leiter at 9:55 AM