"When Shakespeare Was Hot to Plot" 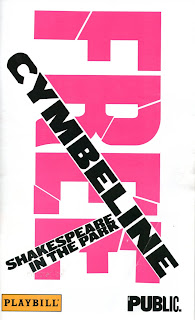 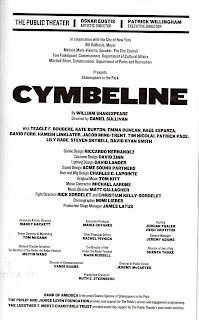 Teagle F. Bougere covers Lucius and the court doctor Cornelius, and when the play requires both to be on stage he does a bit of metatheatrical foolery allowing him to shift from one to the other. Steven Skybell, is busy mainly as the faithful Pisanio, but also appears in several smaller roles. His straightforward Pisanio taught me more about the role than I got from my own clueless performance over half a century ago. Finally, both Mr. Furr and Mr. Ming-Trent must be commended for their vivid work as the kidnapped brothers, as well as the two Gentlemen.
There are a lot of takeaways here, including the contemporary-inflected songs Tom Kitt has written to Shakespeare’s lyrics, including the hand-clapping “Hark, Hark, the Lark” and the beautiful dirge beginning “Fear no more the heat of the sun”; an entrance by Imogen that has her climbing in over the large picture frame and down over the piled up junk to reach the stage floor; David Zinn’s costumes that mix and match periods ancient and modern; and Rick Sordelet and Christian Kelly-Sordelet’s energetic (and even comical) contributions to the fighting sequences.
CYMBELINE may not be a great play, but there are fragments of greatness in it. Daniel Sullivan and his wonderful cast have done everything they can to make it work, and, even if they don’t always succeed, I can’t think of many other things I’d rather have been doing on a beautiful summer night than seeing it come to life in Central Park.