"Ghostly Gathering at a Gettysburg Address" 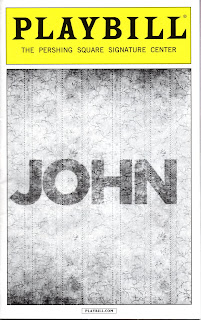 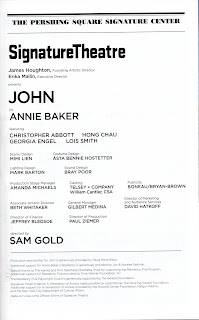 There are many spookily compelling but purposely unexplained ingredients in JOHN, the ghostly new play by rocketing young playwright Annie Baker, whose Pulitzer Prize-winning THE FLICK continues in its second life to draw audiences at the Barrow Street Theatre. In JOHN, Ms. Baker once again demonstrates her ineffable talent for creating a world in which atmosphere trumps plot, or at least plot in the conventional sense. Like THE FLICK, it runs around three and a quarter hours, which may try your patience, but its combination of director Sam Gold’s nuanced, pause-filled direction, an ideal four-actor ensemble, meticulously crafted characters and dialogue, and a dose of magic realism create an aura of spectral possibilities that will keep most viewers glued to their seats (I noticed a few defections when act three began). While not much actually happens, and it takes some time before passions burst, the play is filled with emotional and ideational undercurrents that keep you swimming with it. 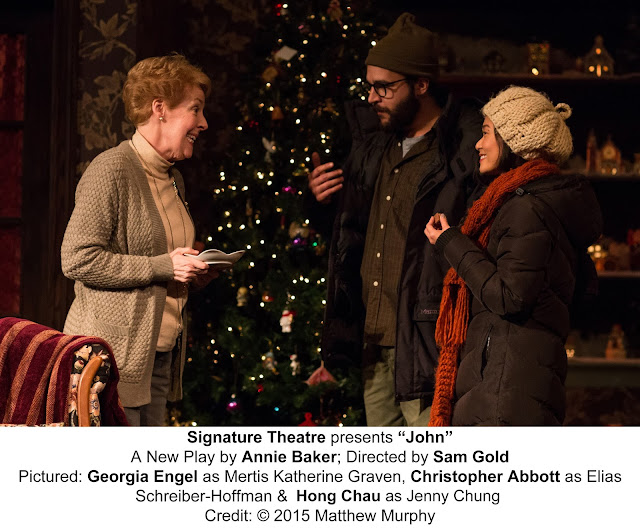 The action occurs shortly after Thanksgiving in a spacious bed and breakfast in Gettysburg, Pennsylvania, site of the famous Civil War battle. Before Mimi Lien’s detailed, expansive setting is revealed, the heavy red traveler curtain hiding it is parted when the B&B’s 70ish owner, Mertis Katherine (“call me Kitty”) Graven (Georgia Engel), pushes one half to the side and then does so with the other (kabuki has a roughly similar convention). She’ll do this throughout, ending and beginning acts by closing or opening the curtains, just as if it were part of her housekeeping duties. In the same mundane manner, she’ll periodically move the time ahead by swirling the large hand on the practical grandfather clock forward, accompanied always by designer Mark Barton’s perfectly calibrated lighting adjustments. 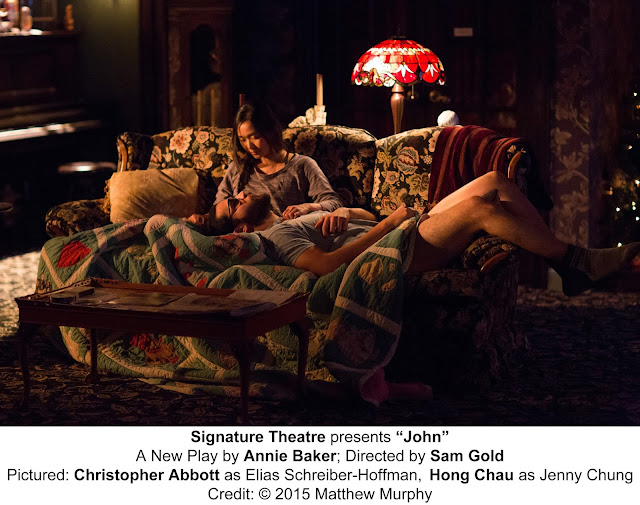 The setting, with a staircase at center leading to the bedrooms, is divided into a living room at stage left and a Frenchified dining area (Mertis calls it “Paris”) at right. Up center are French doors leading to Mertis’s quarters. The place is jam-packed with miniature tchotchkes; an American Girl Samantha doll—which figures prominently in the action—stares vacantly from an elevated perch. A large, fully decorated Christmas tree—whose lights, chillingly, tend to go off and on at will—dominates the upstage area, and seasonal lights line the staircase. Bach plays almost continuously on a jukebox-like radio/CD player, and a player pianos tends to burst into loud, up-tempo renditions of  old-time songs, like “Me and My Shadow” without human intervention. 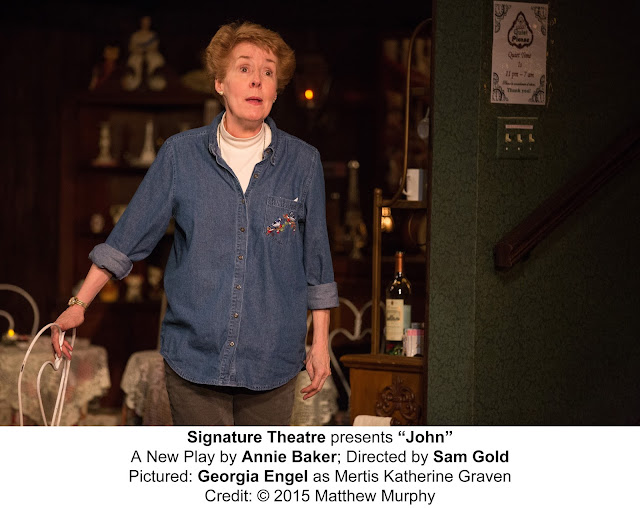 Mertis’s establishment, whose main rooms, each with its own personality, are named for Abraham Lincoln, Confederate General “Stonewall” Jackson (presumably), and Gettysburg hero Joshua Chamberlain, gives every evidence of being haunted, a feeling heightened by creaking doors and sounds that hint at the beating of wings (Bray Poor did the expert sound design). During the Civil War the place served as a Union hospital, performing countless amputations. We learn there’s also a small, mysterious room named for Jennie Wade, although no one mentions that Wade was a 20-year-old who was the sole civilian casualty at Gettysburg; some may wonder, though, if there’s a connection between it and Jenny, the play’s young Asian American heroine. 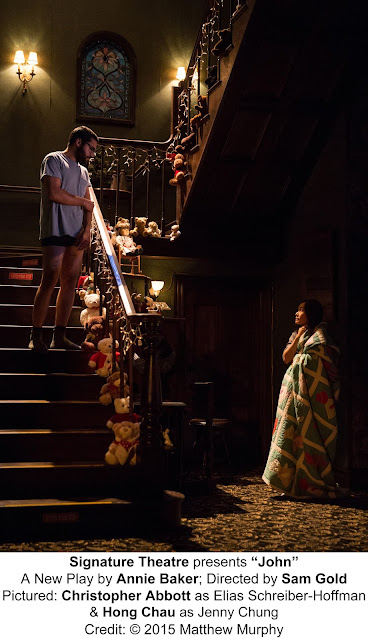 Jenny (Hong Chau), who writes questions for a TV game show, arrives late one freezing night with her “Jewish atheist” boyfriend, Elias Schreibman-Hoffman (Christopher Abbott), whom Jenny describes as “a drummer slash computer programmer.” They’ve detoured here on their way to New York from Ohio because of Elias’s Civil War obsession. Jenny, though, is having her period and feeling poorly, so she spends much of her time in the B&B, chatting with Mertis, rather than sightseeing with Elias. There’s tension in the lovers’ relationship, presumably stemming from Elias’s jealousy over Jenny’s involvement with a guy named John, but it takes much of the evening to get to its heart. 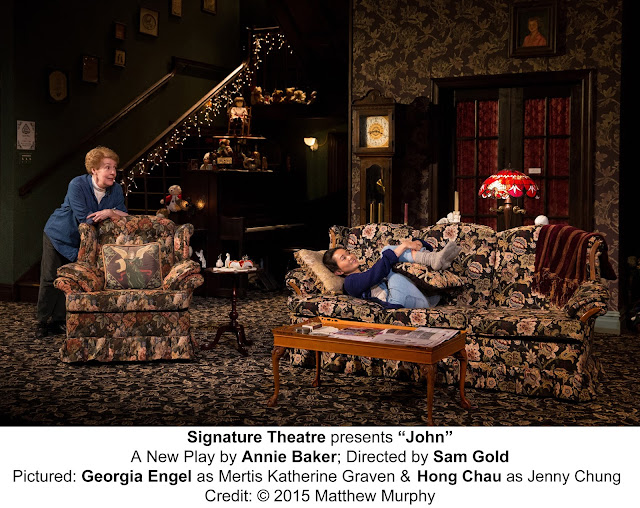 Mertis, a widow who’s been married for 13 years to her present husband, the seriously ailing George (whom we never see and whose very existence is in question), is kind and compassionate, but beyond her mild-mannered geniality there’s something indefinably weird. She keeps a journal which, when she reads from it,  describes the sunset in floridly poetic prose, but when read by Elias is in an indecipherable tongue. She’s lost 40 pounds in four months on an unusual diet, has memorized all the bird groupings (like “an exaltation of larks”), and is able to answer each difficult quiz show question Jenny throws at her. Her best friend is the even older Genevieve (Lois Smith), an imposing, dark glasses-wearing, blind woman in her mid-80s, who offers a strange tale of her former insanity, when she believed her soul to have been inhabited by her then husband, named, like Jenny's other flame, John. 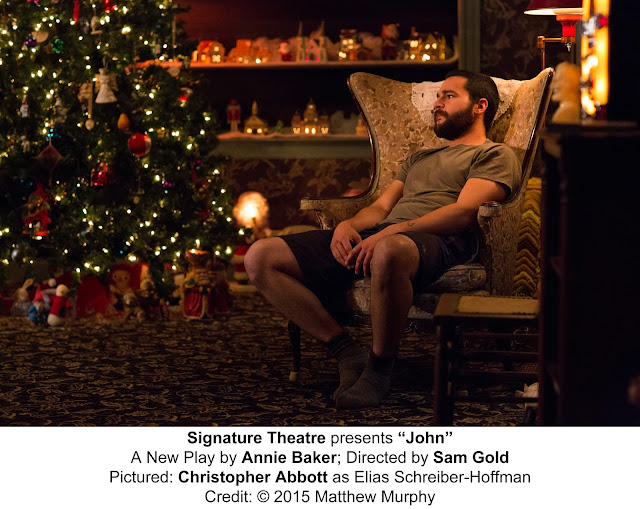 Madness, blindness, and sight, in fact, are among the many recurring motifs and images, which also include storytelling (perhaps reflecting personal truthfulness), supernaturalism, dreams, jealousy, heat and cold, birds, insects, and crushing loneliness. And, oh yes, there’s the lingering question of whether one feels watched by some greater power. Mertis, so apparently unassuming, tosses off arcane yet thematically relevant quotes, the Latin “Nunquam minus solus, quam cum solus” (“Never less alone as when alone”), and the Bible’s “Deep calling unto deep.” These subtextual streams occasionally help evoke a multilayered, mystical milieu that creates a sense of scary otherworldliness within the ordinary one in which the action transpires. Laughs are present, although, for me, not to the steady laugh track level with which some theatregoers responded when I saw the play.

Mr. Gold’s actors (appropriately costumed by Asta Bennie Hostetter) are outstanding, none more so than Ms. Engel, who makes Mertis even more enigmatic by her liltingly friendly voice, which captures the character's charming quaintness, as when she says, "I'll be dipped." She makes all of Mertis’s eccentricities completely believable, so you never can quite guess what darker secrets or powers she may have. As Genevieve, the venerable Ms. Smith offers her own memorable brand of eeriness while also never exceeding the bounds of naturalistic behavior. Mr. Abbott is perfectly in sync with the passive aggressiveness of the insecure, depressed, argumentative Elias, while Ms. Chau brings a grounded, everyday conviction to Jenny, whose every line sounds honest and authentic, despite the questionable truth of what she says. The actors bring so much intention to the many carefully orchestrated pauses that, before long, regardless of the lack of overt action, a subtle web of suspense weaves its threads around you. 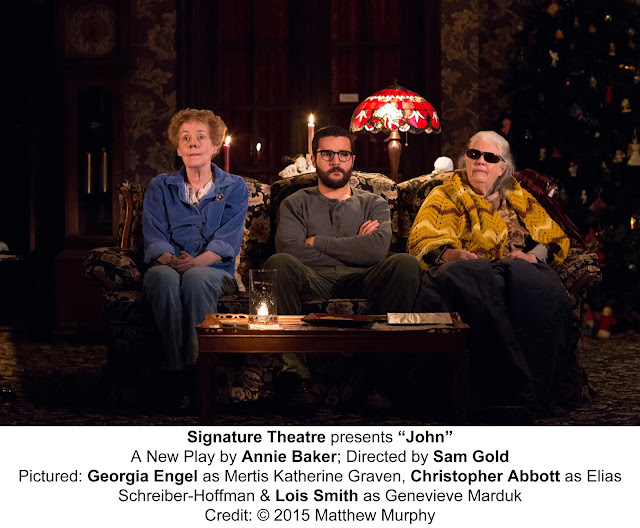 Could the play be briefer? Yes. One thing I wouldn’t mind cutting comes directly after the curtain closes on act two. It’s a fourth-wall breaker that occurs while some people are halfway out the door heading for the bar or restrooms. Ms. Smith suddenly steps through the curtains to ask for five minutes (even seeking someone to time her on his watch), telling us we can have our intermission when she’s finished, and proceeds to deliver a speech on the seven stages of her character’s madness. The bit is clever but unnecessary, and smacks of authorial self-indulgence.

There are several other implausible touches, almost as if the playwright believes that the umbrella of magic realism allows anything to become possible. Not so. JOHN nonetheless remains a striking piece of theatre, certain to stir up lots of post-show conversation.