"If She Were a Rich Girl" 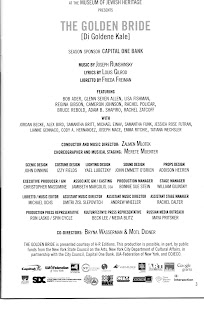 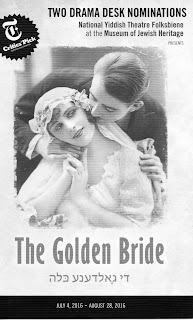 Oy! Have I got a show for you! It’s called The Golden Bride (Di Goldene Kale) and it’s playing at the Museum of Jewish Heritage’s lovely Edmond J. Safra Hall, in Battery Park. I promise you it's a mechia, that is, something totally refreshing. It’s not common these days to leave the theatre humming the music, but there’s a powerful chance you’ll head up the aisles singing the catchy “Mayn Goldele” (My Goldele), right after joining the cast on it at the final curtain.


The Golden Bride is a return engagement of the National Yiddish Theatre Folksbiene’s 2015 revival of a thoroughly entertaining 1923 Yiddish operetta with music by Joseph Rumshinksy, “the Jewish Victor Herbert,” with joyful lyrics by Louis Gilrod and a deliciously trivial yet—in hindsight, socially fascinating—book by Frieda Freiman. And it’s mostly in scrumptiously tasty Yiddish (some passages are in Russian and there’s a smattering of English), which you can follow easily via the surtitles in both English and Russian. (The sing-along lyrics for “Mayn Goldele” are in Yiddish.)

The first of its two acts is set in an idyllic Russian shtetl (no pogroms here) being visited by Benjamin (Bob Ader), a wealthy American Jew, and his actor son, Jerome (Glenn Seven Allen). They’ve come to bring Benjamin’s niece, a young beauty named Goldele (Rachel Policar), back to the States. Goldele, who’s been raised by a pair of innkeepers, Pinchas (Bruce Rebold) and Toybe (Lisa Fishman), has inherited a fortune from her father and Benjamin wants her to marry Jerome. Her newfound wealth, though, makes her the target of three local bachelors—Berke the cobbler (Alex Bird), Yankl the deaf tailor (Cody A. Hernandez), and Motke the cantor (Michael Einav).
Goldele, however, loves and is loved by the dashing wanderer Misha (Cameron Johnson). (At one point, Misha sings a paean to post-revolutionary Russia and all its dreams. This is 1923, so little does he know about a guy named Stalin lurking around the corner.) However, Goldele foolishly decides she’ll marry only the one who finds her long-lost mother, setting the major plot device in motion.
Jerome turns out to be more interested in Goldele’s sister, Khanele (Rachel Zatcoff), who, like him, wants to go on the stage. Along with Goldele, she immigrates to New York, inspiring a sprightly comic duet with Jerome called “We Are Actors.” Pinchas, Toybe, and Kalman also make it to America. A grand finale at a masked ball resolves all the melodramatic plot strands (one of which is reminiscent of the parent scam in Annie), and the company brings down the house with that hard-to-forget hand-clapper about “My Goldele.”
The show reflects, superficially but intriguingly, the immigrant experience of early 20th-century Russians (and by extension other nationalities) longing to leave their oppressed lives for the gold-paved streets of America. Memories of shows like Fiddler on the Roof rattle around during the shtetl scenes, but when we get to New York we’re in a world of idealized Jewish wealth that can only have served to further whet foreign appetites when the show toured to South America and Europe. Scenes of Jewish life are abundant, most touchingly an act one-ending Shabbat Kiddush scene set around a candle-lit table.

Every one of the 15 numbers is tuneful in that old-time operetta way; a 14-piece orchestra wonderfully conducted by Zalmen Mlotek (in an upstage space seen through a scrim) accompanies the robustly gifted company of 20 outstanding singer-actors, both principals and chorus members. There are sentimental lullabies, rambunctious comic numbers, and operatic ballads. The dance sequences choreographed by Merete Muenter are appealing, Izzy Fields’s period costumes are consistently inviting, John Dinning’s unit set serves nicely for all locales, and Yael Lubitzky colors everything with tasteful lighting.

Under the insightful tutelage of co-directors Bryna Wasserman and Motl Didner the company performs with just the right degree of excess energy to establish the stylized, dated nature of the material without ever lapsing into parody. The pacing and enthusiasm never lag; despite the obvious theatrics, we become fully engaged with the situations, recognizing both their outlandishness and their essential truth. Corny as it is, the ending will probably defeat your efforts to hold back the eye-faucets.

Policar and Johnson as the soprano-tenor leads, Goldele and Misha, impress mightily with soaring voices and personal charm, while the comic romantic leads of the brash American actor Jerome (with his American-accented Yiddish) and his Russian bride Khanele provide a perfect balancing act. Adam B. Shapiro’s colorful matchmaker, Kalmen, and Bob Ader’s rich American uncle provide expert comic support, as do Lisa Fishman and Bruce Rebold as Goldele’s foster parents.
Originally given an 18-week run on the Lower East Side at Kessler’s Second Avenue Theatre during the Yiddish theatre’s heyday, The Golden Bride then toured throughout the country and internationally. After its local revival in 1948 the show disappeared until what remained of the score and libretto were discovered at Harvard University by musicologist Michael Ochs around 1990. Several years ago he and the Folksbiene began to work toward resurrecting the show; the extraordinary result is this funny, schmaltzy, silly musical for which Wasserman and Didner received a Drama Desk Best Director nomination, while the show itself was nominated for Best Revival of a Musical.

I missed that production but I can now heartily concur with its accolades and even wish a few more might have been provided. P.S.: you don’t have to be Jewish to love it (but I can’t say it doesn’t help!).