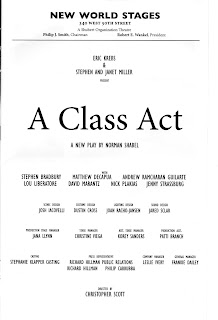 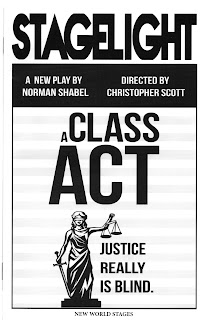 There’s a good reason that a substantial number of hands were raised when co-producer Eric Krebs asked the audience waiting for A Class Act to begin how many were lawyers. A Class Act, by veteran attorney Norman Shabel, is a good fit for legal beagles who aren’t getting enough of their briefs, affidavits, reversionary clauses, appeals, and claims at the office or court and want to spend an evening in the company of actors showing them how their jobs are done.

Given Shabel’s 46-years as a New Jersey trial and class action lawyer, his play, dramatically awkward as it sometimes is, offers a veritable fly-on-the-wall perspective as to what goes on during the intense negotiations surrounding a major law case against a giant chemical company. The episodic drama, which begins in 2014, is set in the offices of the respective battling law firms and that of the fictional General Chemical Corporation’s V.P., as well as in secondary settings such as Central Park and a fancy restaurant: times and places are indicated by projected titles. For an hour and 40 minutes, six lawyers (three on each side), supplemented by General’s vice president, tangle over strategies, legalities, fees, evidence, culpability, and morality.
General Chemical, which has contributed many good things to society, has nonetheless polluted drinking water throughout the country with its chemical runoffs, causing perhaps a million people to get cancer. Fighting for the plaintiffs are the 60-year-old Phil Alessi (Stephen Bradbury) and his youthful partner Frank Warsaw (Matthew DeCapua), aided by the 50ish Ben Donaldson (Lou Liberatore), representing another plaintiff firm, for whom he won a previous case against General in California.
On the defendant’s side are the 62-year-old John Dubliner (Nick Plakias), senior corporate counsel; Ignatio Perez (Andrew Ramcharan Guilarte, a standout), outside counsel, in his 50s; and 38-year-old corporate counsel Dorothy Pilsner (Jenny Strassburg), whose reputation is based on her combination of razor-sharp intelligence, ice-in-her veins attitude, and sex appeal, the latter a potent weapon in her arsenal. Also involved is the company’s 62-year-old V.P., Edward Duchamp (David Marantz).
Lawyers will appreciate the profanity-laced boardroom wrangling over huge payoffs, class actions vs. individual lawsuits, settlements vs. trials, and venal techniques (including two outrageous and surprisingly lame blackmail attempts). There’s a lot of handwringing over the environmentally horrendous practices of companies like General (think Monsanto, Dow, and countless others); Duchamp is even given an explosive tirade cynically advocating that, regardless of the damage done to our planet, technological advances are necessary in the name of business.

Even with one side representing the cancer victims, there are no obvious white knights here. A tone of cynicism and self-interest pervades even the good side, and moral standing is all relative. Whenever things get too shady, Perez, even though representing the chemical company, attempts to demur; ultimately, he’s as complicit as anyone else. Shabel, wanting to make clear where his heart is (as if it weren’t clear enough) concludes with a melodramatic twist that taints the play's integrity much as General's chemicals do the water supply.
It takes a while to get involved in all this, especially as so much exposition is laid out blandly before the narrative and its players come into focus. General’s guilt is never in doubt; Shabel’s strongest suit is his ability to dramatize with a sense of authenticity the often nasty legal dynamics that go on behind the scenes in such cases. The cat and mouse tactics can be fascinating for even the non-lawyerly observer, but they do have their limits.
Under Christopher Scott’s competent direction the actors do their best to bring their conventional characters to life and to speak the often jargon-prone, yet mostly accessible, dialogue with conviction. This is an ensemble piece although the flashiest character is Dorothy. Strassburg gets both her smartness and drive but falls a bit short in capturing her sexual charisma.

This is a low-rent production, with a set by Josh Iacovelli consisting of furniture set against black drapes, with a small screen upstage for a series of rather ambiguous projections. Joan Racho-Jansen’s lighting is efficient and Dustin Cross’s costumes look right for these high-powered attorneys. A Class Act doesn't reach the heights of other works about the dangers of pollution, like Ibsen's An Enemy of the People or the movie Erin Brockovich, but its examination of how lawyers operate entitles it to its day in court.