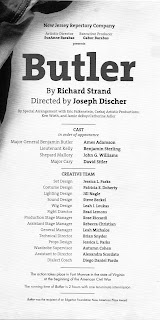 As Michelle Obama reminded the world at this year’s Democratic Convention, slaves built the White House. According to Richard Strand’s engaging historical comedy, Butler, slaves also built the fortifications of Southern forts early in the Civil War. In 1861, on the day following Virginia’s secession from the Union, three of those slaves have run away from a Confederate-held Virginia fort to the Union-held Fort Monroe, also in Virginia, seeking asylum.

The commanding officer is Major General Benjamin Franklin Butler; (Ames Adamson), an argumentative Massachusetts lawyer with no actual military experience, among whose quirks (exploited for comic effect) is an aversion to hearing anyone “demand” anything from him. The only "Negro slave" we meet is the equally argumentative Shepard Mallory (John G. Williams), whose scarred back reflects his obstinacy toward authority. The vibrant verbal volleys between Mallory and Butler invest the piece with wit and wisdom.
Since the Fugitive Slave Act (1850), declaring that property has to be returned to its owners, doesn’t allow Butler to offer the runaway slaves sanctuary, he has to contrive another way to save them when a Confederate agent, Major Cary (David Sitler), arrives, seeking their return on behalf of their owner. Butler saves the day when he devises a clever strategy in which he argues that the men are “contraband,” the fascinating story of which you can read by clicking here.

Although Strand has comedic fun playing with the relationships among the pompously officious Butler, the surprisingly articulate Mallory (who fears letting anyone know he can read), and Butler’s militaristically straight-arrow adjutant, Lt. Kelly (Benjamin Sterling), the basic facts are true. (Note: Butler was a controversial figure. Later in the war, when he was put in charge of New Orleans, he ordered that any woman who disrespected Union soldiers be treated as a prostitute, a command that lost him his position.)
The Confederate major arrives, blindfolded, at Shepard’s suggestion, to prevent his spying on the fort’s armaments. He and Butler—whose comment about voting for Jefferson Davis in the Democratic Convention gets a big laugh, given what’s happening in Philadelphia this week—engage in an amusing battle of words during which Butler gets to display his crafty legalistic mind. (Lawyers, and the way they manipulate the law for their own purposes, are also the subject of the just opened Off-Broadway play A Class Act.)
Butler, produced by the New Jersey Repertory Company, replicates their 2014 production for this New York premiere, with the same cast, director, and design team. It’s set in Butler’s office, a brick-walled room realistically created by Jessica L. Parks and effectively lit by Jill Nagle; the sound design, which uses period tunes, is by Steve Beckel. Furthering the Civil War ambience are the authentic-looking costumes of Patricia E. Doherty.
Adamson’s Gen. Butler bears a convincing resemblance to the original, a pot-bellied officer with balding pate and page-boy locks; he gives the foxy lawyer the ostentatiously florid speech and manner of a 19th-century ham actor that seems a bit over the top at first; by the end of the two-hour, two-act play, you appreciate its daguerreotype shadings. Williams is perfect as the feisty runaway in rags, who “astonishes” Butler with his verbal skills (including words like “convoluted”) and independent spirit. As the overprotective adjutant whose military training seems to have placed a rifle up his butt, Sterling goes from humorously uptight to appealingly upright, while Sitler’s condescending Confederate officer, with his mutton chops and white gloves, offers an ideal image of antebellum Southern smugness just waiting to be punctured.
Butler’s style is heightened for dramatic effect, its tone is mildly anachronistic, and its details conflated, so you have to take much of it with a grain of salt.  Nonetheless, it’s a historical drama about something that actually happened that manages to be relatively faithful to its source material while being both informative and highly entertaining.