“Teens Making Themselves Heard in Harmony” ***** 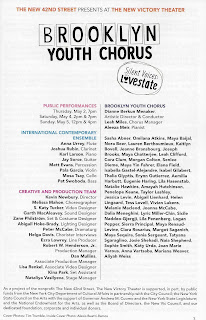 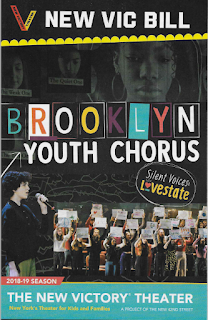 Silent Voices: Lovestate, featuring the Brooklyn Youth Chorus, creates memorable visuals with their young performers. They are the image of diversity in New York City: an ensemble of 12 to 18 year-olds linking arms, holding hands, and blending their voices at the New Victory Theater.


This isn’t just a gathering of teens to sing about fixing what’s broken through love (though they do, exquisitely); this generation has much more to say. The production includes spoken words drawn from their own stories.

They’re concerned about the preservation of facts in a dangerously Orwellian era. They’re worried we’re talking about race without really talking about it. They want to give voices to women who have been asked to take up as little space as possible. They implore people with privilege to empower those without it. Most of all, they ask that their generation be heard. “If adults know better, then why aren’t they doing better?” asks chorister Abigail Lienhard.
The maturity of these teenagers extends to their vocal talent, too. The musical repertoire is not easy; the numbers range from contemporary classical to gospel. Commissioned composers for Lovestate include David Lang and Caroline Shaw (both Pulitzer Prize winners), Olga Bell, Nico Muhly, Angélica Negrón, Shara Nova, Paola Prestini, Toshi Reagon, Shaina Taub, and Bora Yoon.

The show begins with the sound of a bell indicating class is in session, and the chorus enters in small clusters, chatting among themselves as they settle in their rows of seats. Dianne Berkun Menaker (Brooklyn Youth Chorus Artistic Director) begins conducting, and the spell over the audience is quickly cast. Who are these kids and how are they doing that with their voices?

This isn’t your grandmother’s choral concert, with everyone clad in white tops, black bottoms, and tamed hairdos. I was happy to see the teens in casual, colorful clothing (costume design by Zane Pihlström) that showcased their individuality—some wore dresses and sneakers, others jeans and plaid.
And wait, that girl in the bomber jacket, skinny jeans, and combat boots is a glorious soprano. Whoa, didn’t see that coming. (But shame on me for making assumptions based on appearance in the first place—was I even listening to what these kids were trying to tell me?!)

I also appreciated the departure from the traditional choral rows of singers. Directed by Kevin Newbury and choreographed by Melissa Mahon, these choristers sit on the floor or on the backs of chairs, and are frequently on the move, instilling interesting levels and elevated energy into the production.

In a particularly striking piece, the female choristers’ faces are featured one by one on a big screen (video design by S. Katy Tucker). They cast their eyes down as the chorus sings David Lang’s “she is called,” a lament for downtrodden women.

Shaina Taub’s “Huddled Masses” was, musically, the most satisfying for me, feeling more like a whole song and less like text set to music. Not that I mind that, either. In “Advice to a Young Woman,” Nico Muhly adapts rhetorical text from the 1600s on how a lady must behave: “It is better for a Woman never to Dance, because she hath no skill in it, than to do it too often, because she doth it well.” In this piece, several girls break out into dance in beautiful rebellion, with hair flying and joy on their faces.

As the New Victory always does so well, young people are given the special opportunity to connect with the material before and after the show, with activities in the lobby. They can listen to music on headphones and jot their thoughts in a notebook, they can contribute a sign to a communal wall answering what would make the world a better place, or take a Polaroid next to the “What will I stand for”? screen and add it to a cutout of the Statue of Liberty.

The New Victory recommends the show for ages 12 and up. My preteen daughter’s review is a single word: “Empowering.”