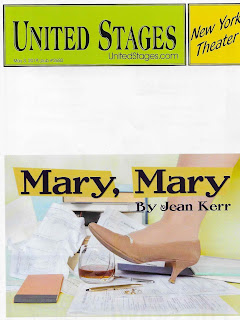 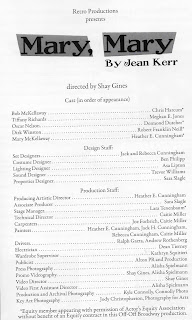 Before there was Nora Ephron, Jean Kerr reigned as the queen of witty playwriting. Her comedy Mary, Mary premiered on Broadway in 1961; it was one of the longest-running plays of the decade, with more than 1,500 performances, and was adapted as a film in 1963, with Debbie Reynolds.

And yet I had never heard of Jean Kerr before this weekend; I’d only known the name of her husband (renowned theatre critic Walter Kerr). In producing her work, Retro Productions pays service not only to classic female playwrights, but new audiences who can be inspired by them. Artistic director Heather E. Cunningham notes: “It is not often that we think of female playwrights when we think of the 1960’s, and when searching for our next production I made the decision to only consider plays written before 1980 by women.”
As a Xennial (born between Gen X and Gen Y), I had a thing or two to learn about the world of Mary, Mary. As a great touch, Retro Productions provides a Pop Culture Glossary of references in the play, ranging from Orville Prescott and Duck Soup to IBM and Alaska. The clever glossary allowed me to understand why my neighbors were laughing at a Gerold Frank joke; now I know he was the pioneer of the “as told to” form of autobiography.


Following that standard rom-com formula, Mary, Mary is centered around two men and two women who form a variety of “will-they, won’t they” combinations, even though, of course, we know the two who will. They are Bob and Mary McKellaway, who haven’t seen each other in nine months and are two weeks away from having their divorce finalized.
Bob (played to full comedic effect by Chris Harcum) is impossibly sensible and square, while his ex, Mary (played with wisdom and sensitivity by Heather E. Cunningham), is—as the play’s title suggests—a contrarian. She’s a wisecracking magazine editor, while he’s a stuffy book publisher.

They are brought back together by Bob’s tax lawyer, Oscar Nelson (a delightful Desmond Dutcher), to prepare for an audit. To complicate things further, Bob’s got a bubbly, young new fiancée (or a deductible, according to Oscar) who is dying to meet Mary and get notes on being married to Bob. Meghan E. Jones is perfectly ridiculous as Tiffany Richards, and I mean that as a compliment.

Then there’s Bob’s old Navy buddy-turned-movie star, Dirk Winston (a cliché played with great believability by Robert Franklin Neill), who shows up to convince Bob to publish his memoir and ends up wooing Mary. Their courtship infuriates her ex-husband, who can’t seem to make sense of his jealousy: “Life with Mary was like being in a telephone booth with an open umbrella—no matter which way you turned, you got hit in the eye.”
Bob and Mary slowly find their way back to each other through inside jokes and a mutual fondness for cigarettes (the bubbly fiancée doesn’t smoke). This Xennial derived pleasure from the silver-haired audience filling the majority of the seats in the Gene Frankel Theater. I enjoyed their laughter and nostalgia, made obvious by their knowing sighs during those intimate moments best understood by couples who have been together long enough to finish each other’s sentences without knowing they’re doing it.

While the first act lags at times, the second act is laden with energy and physical comedy, thanks to shenanigans involving sleeping pills, a locked door, and a lost key. When all five actors are romping about on stage, they reach their peak laughter from the audience. Think: Neil Simon meets Lucille Ball.
All scenes are set in Bob’s apartment/home office, and I have to pause to commend the design team on the stunning set (Jack and Rebecca Cunningham, Heather’s parents, both veteran designers) evoking the 60s on the Upper East Side. The gorgeously painted blue walls and retro props (Sara Slagle) along with a really neat, beautifully lit (Asa Lipton) window, all serve up an era long gone.

So much of theater these days is about an outrageously fresh take on a classic piece that sometimes it’s nice to see a revival that doesn’t try to put a modern lens on old themes. Director Shay Gines’s Mary,Mary is wonderfully straightforward. Now and then ya just wanna see a good old-fashioned rom-com.