From time to time Theatre's Leiter Side will be posting reviews of Off-Off Broadway shows my schedule prevents me from seeing. If you are interested in reviewing Off-Off Broadway, please contact me so we can discuss. I hope you find the expanded coverage useful. Sam Leiter 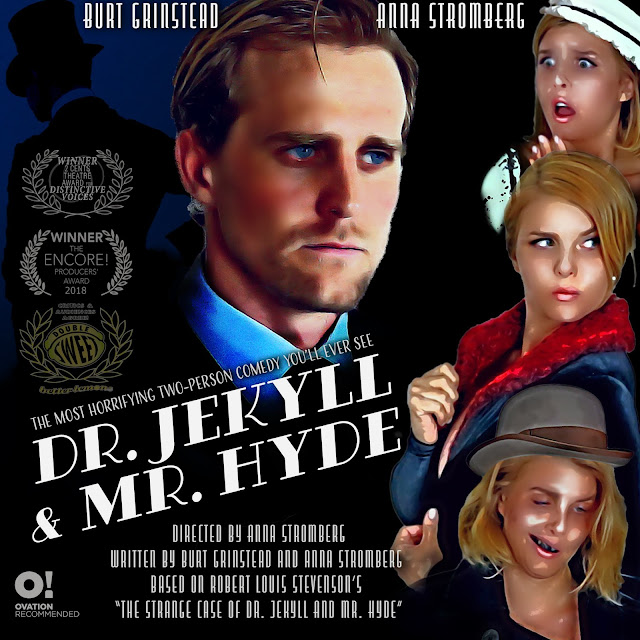 Part parody and part earnest adaptation, Dr. Jekyll and Mr. Hyde at the SoHo Playhouse feels like Mel Brooks and Lin-Manuel Miranda got stoned, wrote a sketch for SNL in which Kate McKinnon played all the parts, and it was so good they made a full-length production of it and won critical acclaim.
While this production, written and performed by my new favorite couple, Burt Grinstead and Anna Stromberg, is certainly satire, it doesn’t feel like a full-on parody. To its credit, it’s an honest-to-gosh retelling of Robert Louis Stevenson’s The Strange Case of Dr. Jekyll and Mr. Hyde. Well, okay, with some liberties taken. With just two actors and minimal technical requirements, I hope it becomes a mainstay in high schools and colleges.


I had a good time even before the show began. The theatre was filled with smoke (even downstairs at the bar!) and sounds of wind howling and crows echoed. When the announcement came on telling us to silence our phones because the execution was about to start, I figured this was the sort of production that was going to either be really brilliant or really terrible; somewhere in the middle wasn’t likely. Unlike the show, I’m not going for suspense—it was well executed (yuk yuk).

In case you only know Jekyll and Hyde as a campy theme-restaurant, it’s the story of a scientist, Dr. Jekyll, whose brother is murdered for being a psycho serial killer, which sparks the doc to conduct research on the good and evil parts of the brain. (In the 19th century it was widely believed that the left side was responsible for the ability to be rational and civil, while the right side related to being impulsive and primal. If I sound smart, it’s only because I crammed by consulting this most literary source.)

When Jekyll is denied a grant to conduct this research that his peers feel should be left to God, he takes his experiment into his own hands and transforms into Edward Hyde, the base embodiment of his inner immorality who’s really good at killing and getting laid. Thus begins the battle of good vs. evil. And also lots of “Hyde/hide” puns.
Grinstead and Stromberg’s performances seem as vocally taxing as they are exhilarating, and I desperately hope they are drowning themselves in Throat Coat between shows. Grinstead is convincing in the dual role, playing a sweet, adorkable Jekyll and a creepy, menacing Hyde. He gives everything he’s got to both characters, hurling himself across the stage, crawling and leaping and growling to the point where he’s drenched in sweat by the end of the show.

Every second of the quick-paced production is occupied with action, as Stromberg works feverishly and hilariously to portray every other person in the play. As director and costume designer, she creates fully distinct characters using simple wardrobe items—the maid dons an apron, Jekyll’s heartthrob Sarah has a petticoat, the lawyer sports a cap, the professor wears a monocle, the socialite rocks a fascinator, and so on.

My favorite is her Dr. Lanyon, the scholar who refuses Jekyll his research grant because it’s too ungodly. I laughed steadily throughout the show, but I lost it when Stromberg emerged as Lanyon with a big fat paunch, represented by a sort of pillow that hangs from her neck over her belly and is wrapped in a tuxedo!

Stromberg’s quick-change skills are impressive as she flawlessly flits about from character to character, adopting with ease their particular speech pattern, accent, vocal inflection, and costume. There is, of course, one obligatory Mrs. Doubtfire moment in which Stromberg accidentally-on-purpose screws up and wears the maid’s apron while portraying Utterson, the lawyer.

As the characters rapidly rotate, so do Grinstead’s super savvy set pieces, black Tetris-like blocks that connect in various ways to create bookshelves, stairs, a flower garden, a fireplace, and more. I was floored at how many possible configurations these blocks formed, and I couldn’t wait to see what they would become next. Adam Earle and Matt Richter’s fun lighting provides motifs for various characters, such as romantic pink hues for Sarah’s appearances and maniacal green tones for Hyde.

This is the sort of production that lives or dies on its script. If the dialogue had stunk, it would have been excruciating. The writing is clever, unpretentious, and provides an all-around good time. It didn’t surprise me to learn that Grinstead and Stromberg are married. The production is the clear result of a collaboration between two people who can really riff off each other. I’m sure they giggled their way through writing and rehearsals. And perhaps took turns going on vocal rest.