“How Does Your Garden Grow?”

From time to time Theatre's Leiter Side posts reviews of Off-Off Broadway shows my schedule prevents me from seeing. If you are interested in reviewing Off-Off Broadway, please contact me so we can discuss. I hope you find the expanded coverage useful. Sam Leiter

It’s is a blessing that there’s such an abundance of theatre in New York City; the downside, of course, is that a great deal is forgettable. There may be nothing offensive or even off-putting about a production, but if it’s not compelling or dynamic, once I leave the theater, it’s like I was never there. Such a show is Leaving Eden, a new musical offered by the New York Musical Festival, with a book and lyrics by Jenny Waxman, music by Ben page, additional music by Ada Westfall, and direction by Susanna Wolk. Its professionalism and a few charming moments are not enough for it to take root in this summer's theatrical garden. 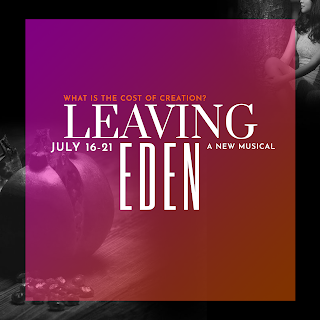 This is a story of two trios, each at the inception of life. One is biblical, Adam, Eve, and Lilith, the mythical original woman in the Garden of Eden. The other is modern: Adam, Lily, and Eve. The paired stories reflect and comment on each other as each navigates creation, feminism, betrayal, and love.

Taking part on a minimal stage with no more than a single set piece to establish space, and a small band behind the backdrop to accompany the action, the play moves along at a nice clip, but nothing grabs your attention. Lily, played with aplomb by Janet Krupin, cannot have a child after her hysterectomy. She struggles to communicate with her husband, Adam, portrayed by the talented Azudi Onyejekwe. This is reflected in Adam and Lilith’s odd power dynamics, infused with bright tones by Sarah-Anne Martinez and Ian Ward, as they create life in the Garden. Eve, acted with conviction by Gabrielle McClinton, finds her way into both worlds.

The performers are all solid, but, other than some colorful adult humor, the play doesn’t assert itself. Neither its ideas nor dialogue are gripping, while no other particular element stands out. The story just moves along, with one similar-sounding number after another.

That story tells of these couples coming together and falling apart. The modern couple has a ménage à trois. Adam kicks Lilith out of the Garden, following which Lilith feeds the apple to Eve. In theory, this shows promise, but, either because of conservative storytelling or ineffective writing, it makes no impact.

Perhaps I undersell the performers, who, as in a neoclassical painting, are all firmly set in their characters. Leaving Eden also includes a great deal of physical intimacy, which, impressively, was executed safely and convincingly, thanks to the work of intimacy director Veronica Sofia Burt.

The musical, though, has no tunes worth humming, just a few repeat-worthy dirty jokes. Regardless of its talented cast, there's nothing in it that will stay with me. I couldn't have been happier than to be leaving Leaving Eden.

Aron Canter studied theatre theory and alternative performance at The New School and is working toward an Art History masters at Hunter College. He has been a theatre and art critic, a supernumerary at The Metropolitan Opera, and currently works as a medical professional. aron.canter@gmail.com.