On July 13, there was a blackout in New York City that shut down Broadway. Unable to go on, several shows, including Hadestown, Waitress, and a Carnegie Hall choir, took their acts to the streets. Hours earlier, at the New York Musical Festival (NYMF), a less dramatic event prevented a production from proceeding as scheduled: a leading actress, Maddie Shea Baldwin, was too ill to perform in LadyShip. This being a NYMF show, there was no understudy. Rather than cancel, the cast instead put on a concert production, with co-writer Linda Good filling in for the under-the-weather player. 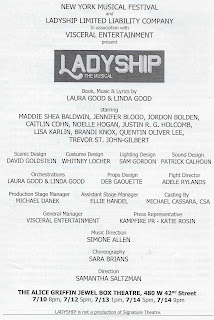 You might expect the audience to have been cranky about this, as they had paid for a full production. But just as New Yorkers offered their support when the lights went out on Broadway and took to the streets to help control traffic, the LadyShip theatregoers applauded wildly when Linda Good sang her big solo and gave the cast a standing ovation at the end.
Yes, perseverance was the theme of the day, also dominating the musical created by the twin pop indie duo Linda and Laura Good, who wrote the book, music, and lyrics. LadyShip, directed by Samantha Saltzman, is based on the true—and not widely known—stories of the thousands of women who were sent on ships from London to colonize Sydney, beginning in the late 18th century. If British male convicts were the bottom of the barrel, then what would you call the female population gifted to them as wives to birth future generations?

Through the song “The Bloody Code,” we learn how the British government concocted a plan to populate the Australian colony by sending female convicts (which is to say, poor women and young girls who commited petty crimes to survive) on ships to Sydney to serve a seven-year sentence—that is if they could survive the 10-month journey overseas as prisoners below deck with moldy biscuits as food and wooden shelves as beds.
Representing the hordes of female convicts transported on ships are six characters, more or less recognizable as players in any period piece: the wholesome young sisters, the feisty street dweller from the school of hard knocks, the mother who will do what it takes to return to her children, the noblewoman fallen from grace, and the sweet little orphan who yearns for a better life.
The men of the cast include the tormented law-abiding captain, the villainous captain’s nephew (luckily, he has no mustache or, surely, he’d twirl it), the young romantic lead, and the burly, brutish seaman.
The company of 10 skillfully breathes maximum humanity into the token characters, singing the well-crafted score with an exuberance that held my attention for the two-hour performance. Caitlin Cohn plays Mary with quiet strength, Noelle Hogan is superb as 11-year-old Kitty, and Trevor St. John-Gilbert and Quentin Oliver Lee deliver rich vocals. The trio of musicians (Simone Allen, Christopher Anselmo, and Charlotte Morris) provides lively accompaniment.
Considering the rough threats to the passengers, including mothers being separated from their children, slavery, starvation, and rape, LadyShip is surprisingly uplifting, with healthy doses of comedy, female friendship, and joyous music. While in future iterations it would be great to see the characters more developed, LadyShip successfully, and in the spirit of its clever title, explores the strength women draw from each other in suffering.