“Served with a Homicide of Romance”*** 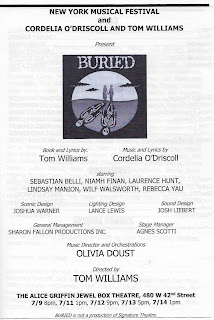 Some people spend their university years in an inebriated haze; others write a full-length musical. Sure, University of Sheffield students Cordelia O’Driscoll and Tom Williams were under the influence when they created their first piece, Buried. That would be the influence of Jason Robert Brown and Stephen Sondheim. O’Driscoll and Williams have touted The Last Five Years and Sweeney Todd as inspiration for their musical, which is about two serial killers who like each other enough not to murder each other on the first date…awwww!!!
In the opening musical number, Rose (a compelling Lindsay Manion), goes on a series of dates (including a crotch-grabbing dude and a droll, nerdy girl) that end in the demise of these duds. Then she meets Harry (Sebastian Belli): yes, that is a knife in his pocket and he’s not just happy to see her. She puts down the poison that had his name on it and they compare notes on their murderous ways.


Rose and Harry pair up, but not in that way. They decide to join forces in a killing spree, and romance comes later (you know what they say—first comes homicide…). Promising premise, but not much happens from there. With the smattering of killings occurring offstage, and a low-thrill storyline, the result is a good deal of dead space.
Lifting Buried above ground is the original folksy score by O’Driscoll (music and lyrics), soulfully led by the silky-voiced Manion, who would be equally comfortable singing on stage or in a coffee house. The lilting harmonies of the ensemble (Niamh Finan, Laurence Hunt, Wilf Walsworth, and Rebecca Yau) elevate their characters from cartoon status. A standout number, “I’m Okay,” features the cast’s female trio, whose voices blend beautifully.
In contrast with the sophisticated score, the book by Tom Williams (who also co-wrote the lyrics and directed) comes across as boring and at times, even amateurish. But take that with a grain of salt, considering this production won accolades across the United Kingdom and made its way to the New York Music Theatre Festival, an admirable feat for two university students who, by the way, are already working on their next musical.